You are here: Home / Review - Producer / Review / Down on the KellyBronze Farm 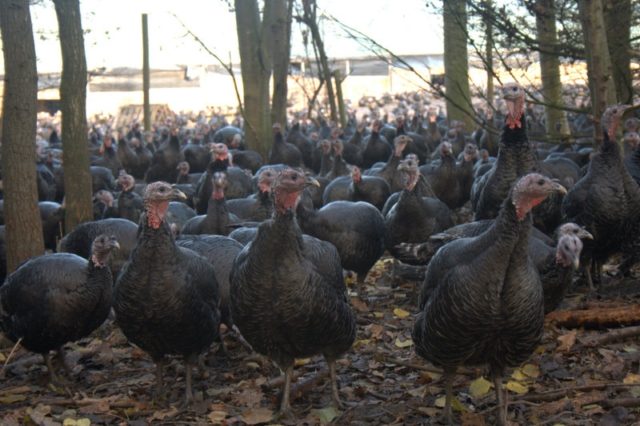 I don’t drive daily past fields of crops or livestock, so I find I’m not really in touch with the march of the seasons. And while for many seasonality is something to be ignored if at all possible – easily done by buying runner beans from Kenya and (tasteless) tomatoes grown in heated polytunnels – there is one food which most of us encounter only once a year and therefore production of which is geared to a once-annual rush. I am, of course, talking about Christmas and turkeys.

Like all foods, what you get out in quality and taste depends on what went in, in terms of care and effort by the farmer. Probably the most well known premium brand of turkey in the UK is the KellyBronze and I was therefore very interested to be invited to the farm to see what goes on. 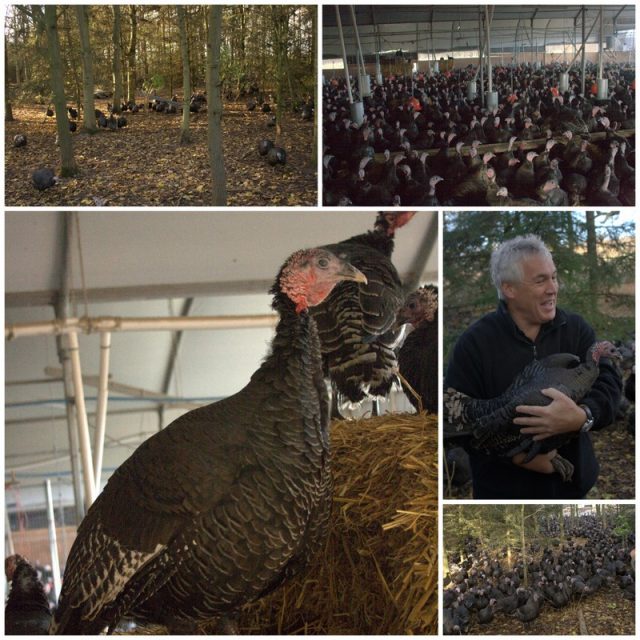 We spent the morning with Paul Kelly, the son of company founder Derek, who had started the company in the early 70s and had travelled the country in the early 80s buying up the 4 remaining flocks of bronze feathered turkeys in the UK. Turkey flocks in this country had been taken over by the ubiquitous white bird, and the team aimed  to do something different from the rest of the market. I was interested to hear that the white turkey was specifically bred: white means that you can’t see the feather stubs, black feather stubs being something that the consumer doesn’t like. I suppose it’s not surprising that a colour as un-camouflaged as white isn’t really natural – I doubt that white turkeys in the wild would have lasted long.

The care that goes into the birds is impressive, from the selection of the breeding stock; the birds are slow growing to increase flavour, selection of feed, slaughter, dry plucking, hanging for the best texture before being sent to the consumer. The one step that we were most surprised by is that after plucking, the birds are waxed to remove the feather stubs. Amazing.

We discussed as some length the difference between dry plucking using a machine compared to wet plucking. By dry plucking, there is no contamination, and so the birds can be hung to mature. The wet plucking process means that the birds must be drawn – eviscerated – straight away, and can’t be hung.

We then met the birds at the largest of the sites Paul uses. It’s quite something to be surrounded by a flock of thousands, particularly when the species is as curious and biddable as turkey. I could really see how traditionally flocks were driven slowly from East Anglia down to London over a period of months. 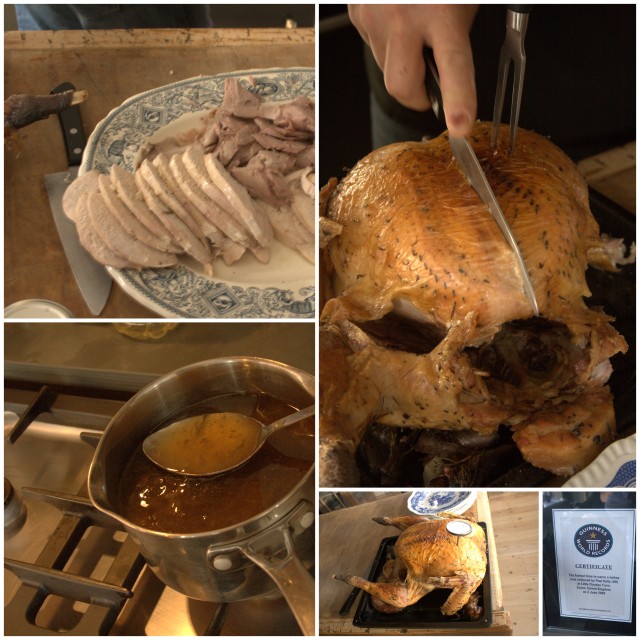 Finally, it was all back to Paul’s for lunch. Guess what? Turkey! Delicious it was too, sweet, juicy and succulent. Each turkey ordered is sent out with it’s own meat thermometer so that the cook knows when the bird is cooked properly, but not overdone – the quintessential Christmas crime. As an added treat, Paul took the skin off the breast and leg, laid it out on an oven tray and roasted it with a little salt: turkey crackling. We really couldn’t get enough of it.

Fuss Free Flavours was the guest of KellyBronze.  Thank you for a lovely day. 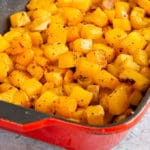 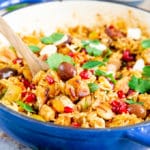