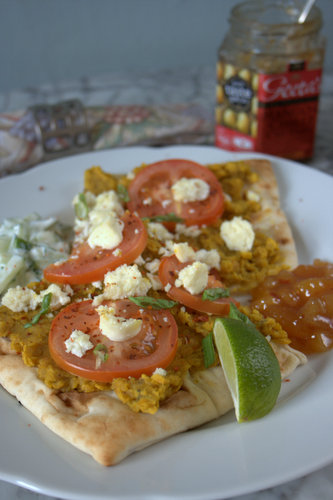 A first mention a naan bread and lentil pizza sounds almost a step too far along the fusion cuisine path, but this little number works very well.   It is positively Fuss Free too, as you can prep the paneer and lentils in advance and stash in the freezer along with the naan bread.  Whip them out of the freezer, defrost the lentils in the microwave and supper will be in the oven within a few minutes.  As I said, perfectly Fuss Free, as well as delicious, and protein packed from the lentils.

Warburtons have recently added two naan breads to their range, which they have developed alongside Michelin starred chef Atul Kochhar.   I appreciate that many people are highly skeptical of chefs working alongside brands to develop products, but I honestly believe that the majority of top chefs are not going to risk their reputation for a financial reward.   These naan breads are very good.  Pillowly soft, bubbly and delicious; they have a shelf life of a week and freeze well.   I do make naan bread, but they are tricky to get perfect in a domestic oven so it makes sense to buy them.

At the launch of the product Atul told the assembled company that he had served the breads in his restaurant once when their gas was off and they could not cook their naan from scratch.  That is pretty conclusive product endorsement in my opinion.

Because the breads are square, they are more versatile than the traditional tear drop shaped bread, and thus are great for rolling or wrapping.  I topped mine with dal and homemade paneer, baked and served with mango chutney and tzatziki for a delicious lunch.   Do not skip the wedge of lime, the squeeze of juice makes the dish; again, lime wedges can be frozen and will defrost whilst the naan pizza is cooking.

If you do not want to make your own paneer any soft mildly flavoured cheese would work well in its place. 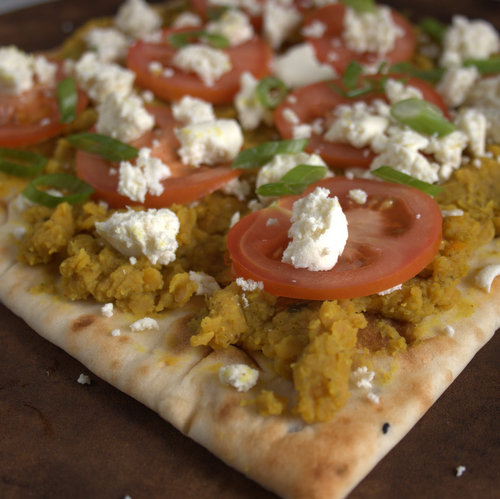 If you try this Recipe: Naan Bread Lentil Dal Pizza please tag #FussFreeFlavours on Instagram or Twitter. It is amazing for me when for me when you make one of my recipes and I really do love to see them. You can also share it on my Facebook page. Please pin this recipe to Pinterest too! Thanks for reading Fuss Free Flavours!
5 from 1 vote 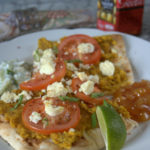 Many thanks to Warburtons for asking me to the launch of their naan breads and for the samples.