You are here: Home / Travel / 6 things to do in Gran Canaria from Anfi del Mar Beach Resort

The Canary Islands are a Spanish archipelago off the North West African coast.   With all year round sunshine and frequent and inexpensive flights from the UK they are a popular destination and ideal for winter sun.   We visited Gran Canaria, the third largest of the islands and stayed at ANFI del Mar on the South West Coast at Mogán to experience their relax package. 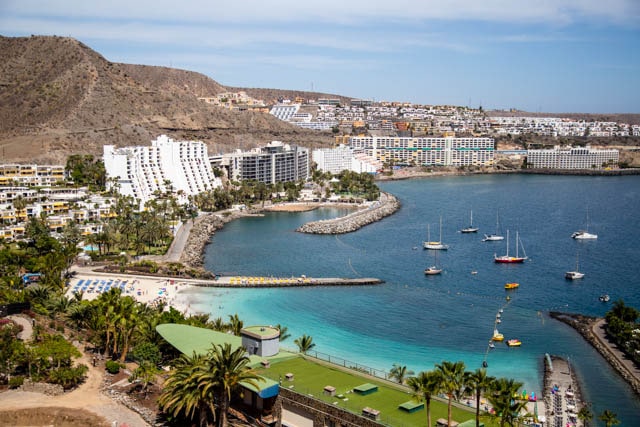 The Canaries are the most southerly part of Europe and have a lot to offer: year round sun (in early May I was almost too hot, but we’ll put that down to my Northern European genes), sandy beaches, rocky mountains and forests.   With an established tourist industry the resorts are well developed and sophisticated and ANFI certainly offers enough to keep you busy for a week without ever leaving the resort, but of course there is plenty to explore on the island, all within an hour and a half’s drive at the most.

Gran Canaria offers sand dunes, historic towns and pretty villages, Europe’s only coffee farm and remarkable local cuisine, as well as fun activities like watersports, hiking and mountain biking.  Because of Gran Canaria’s position in the Atlantic Ocean the climate in the north of the island differs hugely from the south, with the north being noticeably greener and cooler.

I also discovered that the Canaries are not named after the small yellow birds but rather the large dogs – canis – which were found there.

Walk in the sand dunes of Maspalomas 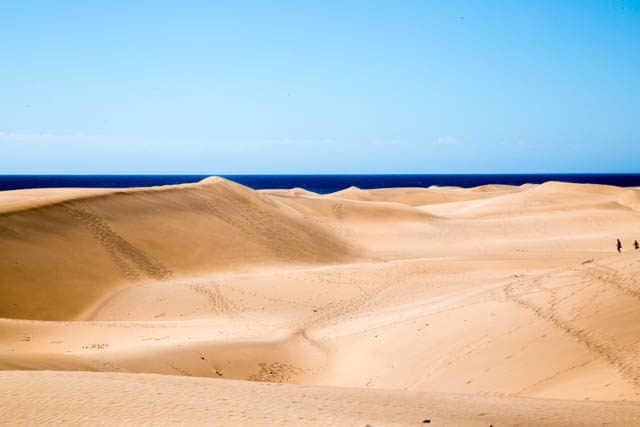 Wandering through the sand dunes of Maspalomas is like a walk in the desert, and is a reminder of how far south the Canary islands are, and that the Saharan Africa is less than 100 miles to the East.

For the best photos, visit when the sun is low and casting spectacular shadows.   It is much further to the sea than it looks, the dunes cover an area of 400 hectares; the walk takes about an hour from the Hotel Rui Palace so be prepared with sun-screen and water. 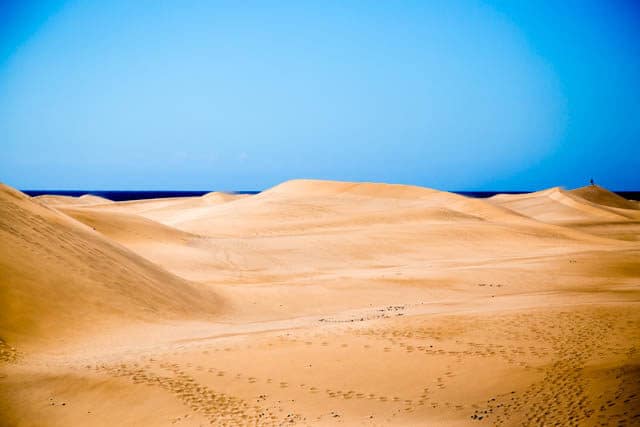 The pretty port of Puerto de Mogán is a 10 minute drive from ANFI, or a 30 minute ferry ride, with the boats leaving from ANFI’s Maroa beach club all day. 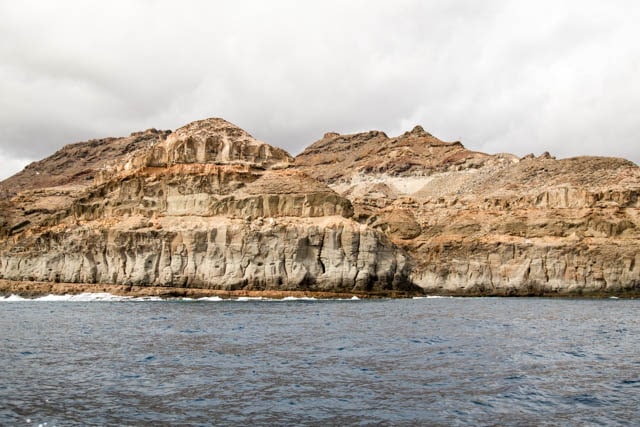 Its far more relaxing to travel by the water and take in the dramatic scenery of the south coast of the island and a glimpse of the peak on Tenerife across the water.

Behind the picturesque port is a grid of pretty whitewashed houses covered with brightly coloured bougainvilles.

It’s perfect for a relaxed wander and taking some photos.

I am firmly fuelled by coffee so it was a delight to visit La Finca Los Castaños, in the fertile Agaete valley to the North West coast of the island. Coffee has been farmed here for over 150 years.

The farm now covers 2 hectares and offers tasting and barista courses as well as a quick tour and opportunity to wander in the coffee bushes, and taste a freshly picked sun warmed berry. 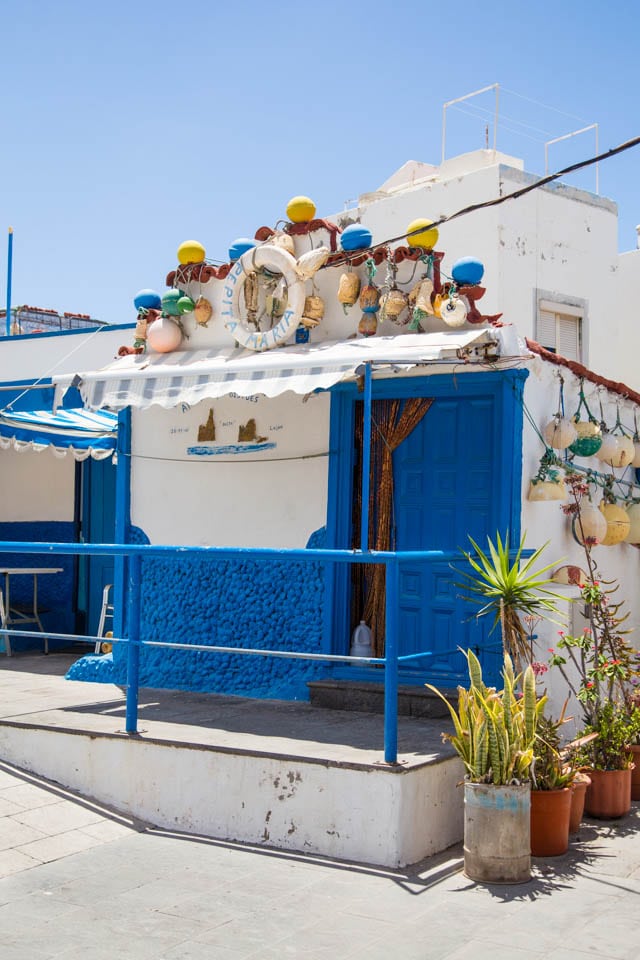 Close to the La Finca Los Castaños coffee farm is the attractive port of Puerto de Las Nieves with traditional Canarian white houses with blue painted trims and doors. We had lunch at Restaurante Las Nasas, a local restaurant serving traditional fare of lots of seafood all accompanied with delicious Papas Arrugadas.  The English name for this dish is the rather unappetizing wrinkled potatoes; they’re cooked in heavily salted water. (Get the recipe for Papas Arrugadas). 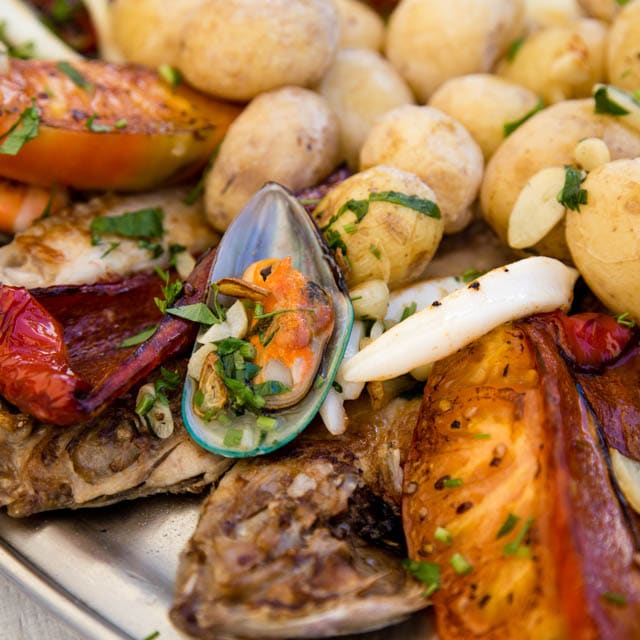 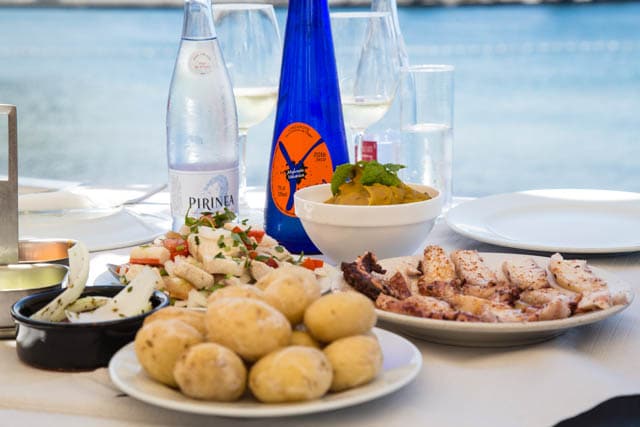 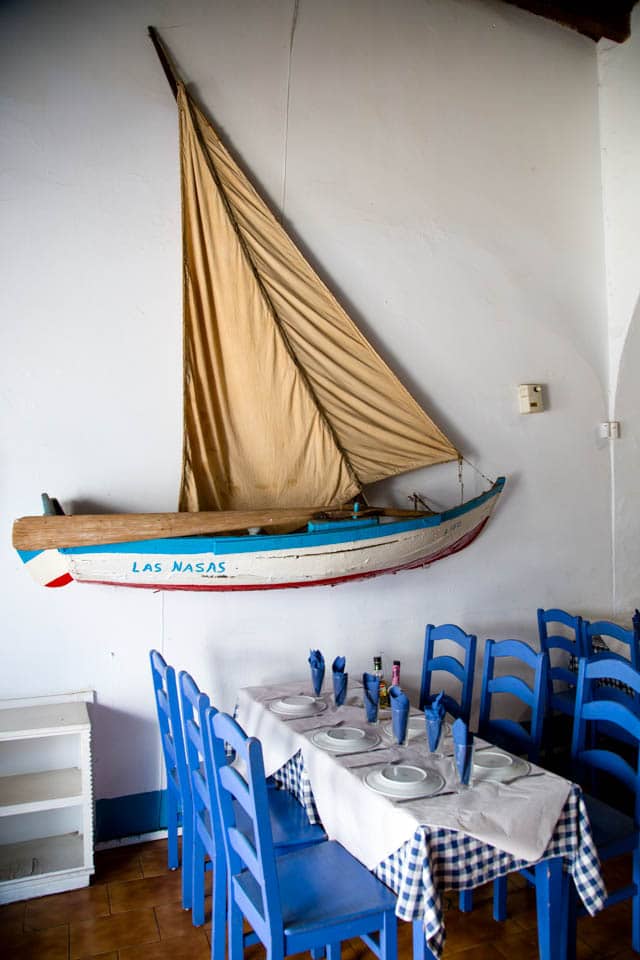 Follow in the steps of Colombus in Las Palmas 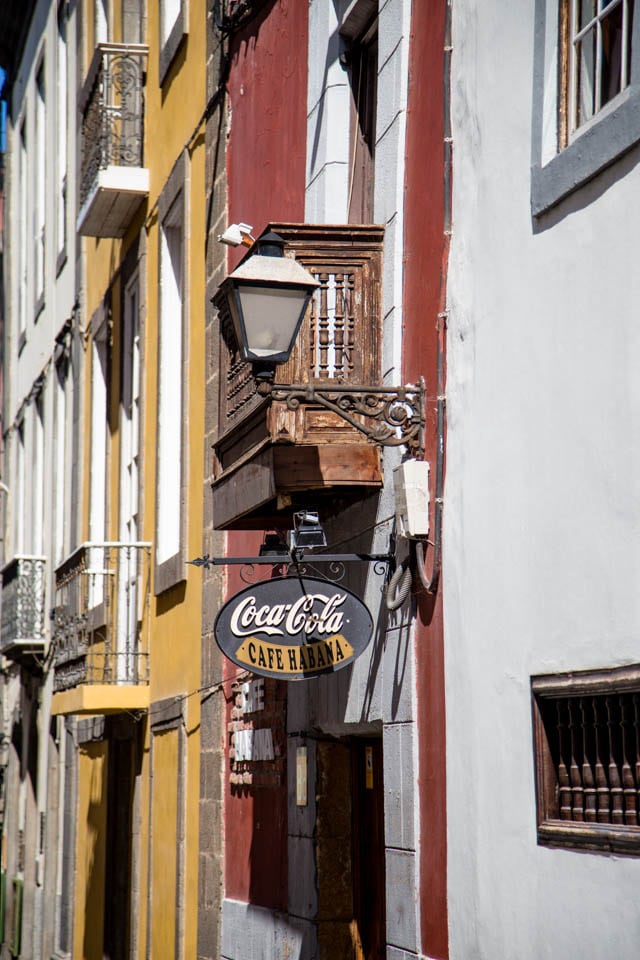 … and as we all know discovered America.   What I hadn’t appreciated was that he stopped off Las Palmas, the capital of Gran Canaria on the way! 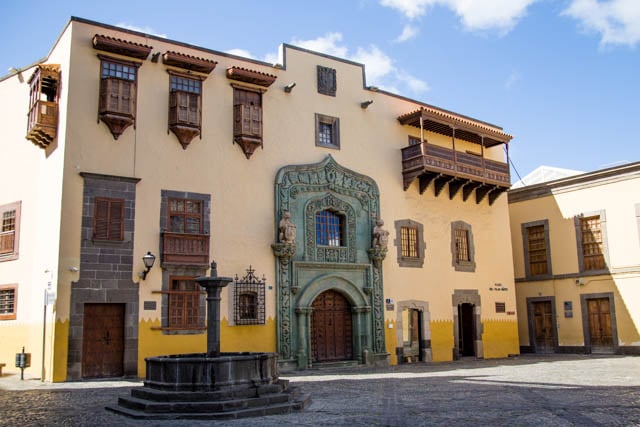 The former governor’s house, now Casa de Colón, is a fine example of Canarian architecture with ornate decorations, now houses a museum on Columbus, his voyages and life on board. 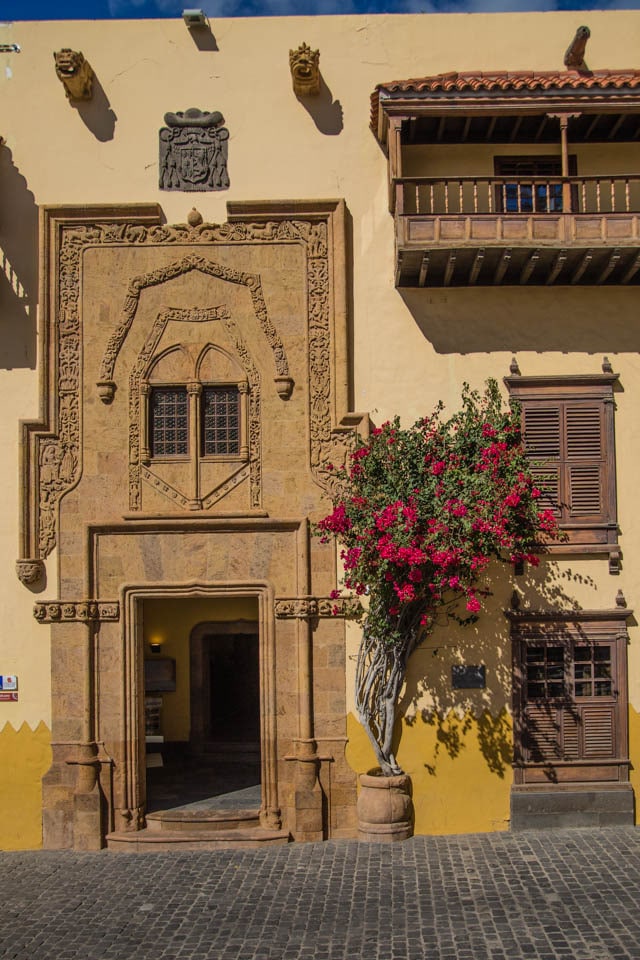 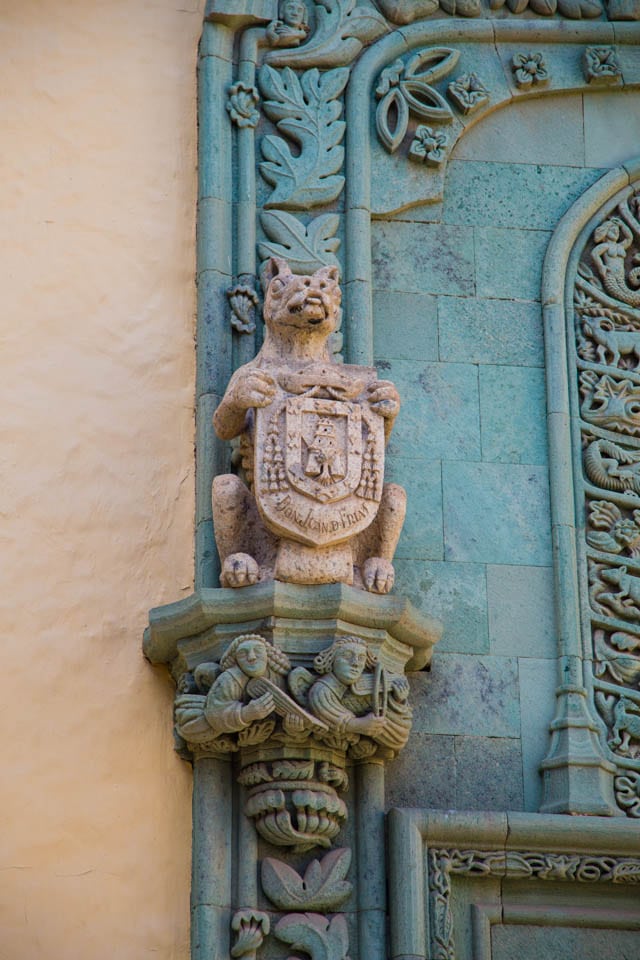 The narrow winding streets of Las Palmas offer shade and a welcome respite from the hot Canarian sun, and are a delight to wander in and get lost. 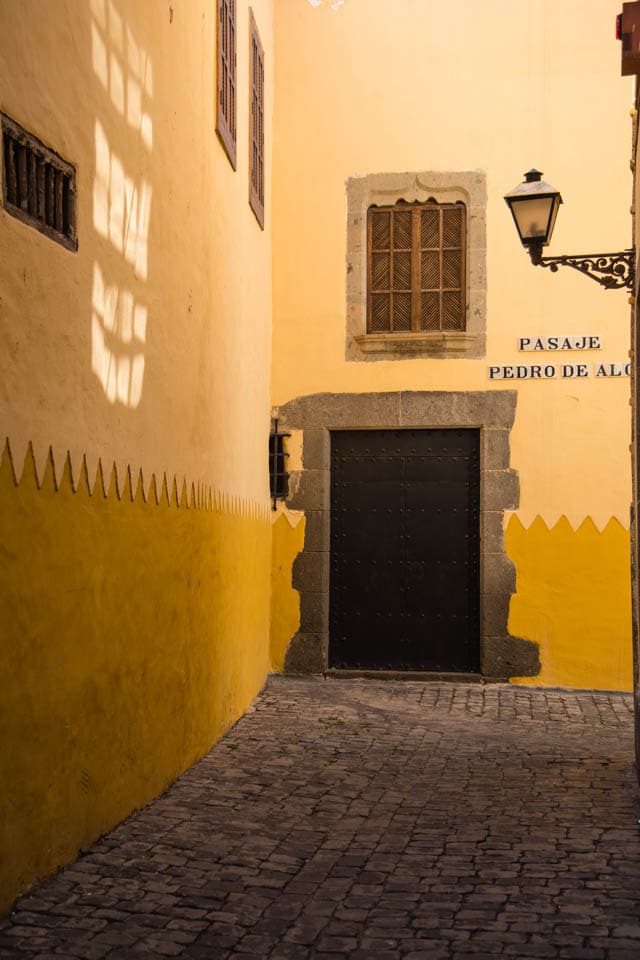 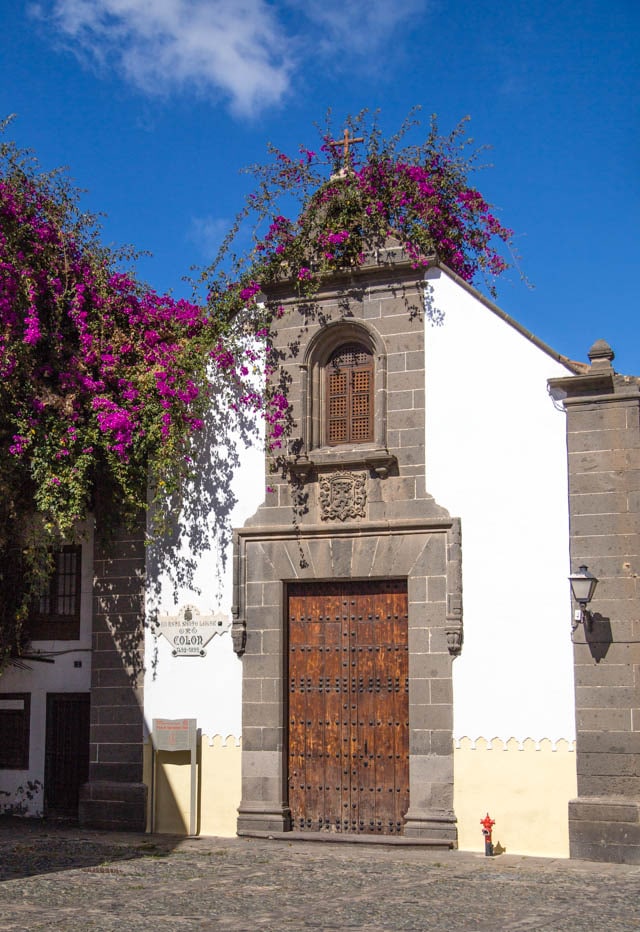 Explore the rural villages and markets of Gran Canaria 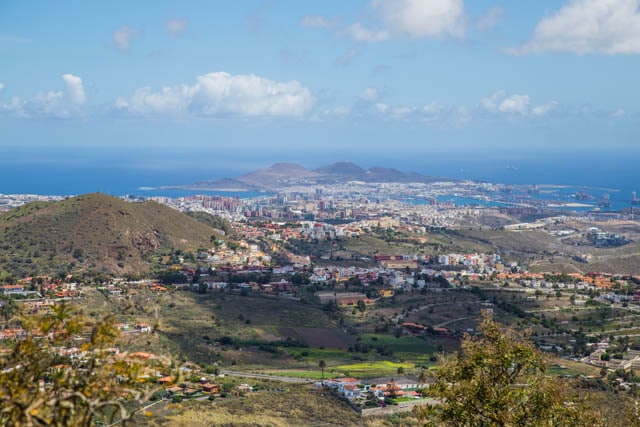 Away from the towns and reports of the coast there is a very different island, more rural and with a far slower pace of life.  There are plenty of attractive villages with a church at their heart and a weekly Saturday market. 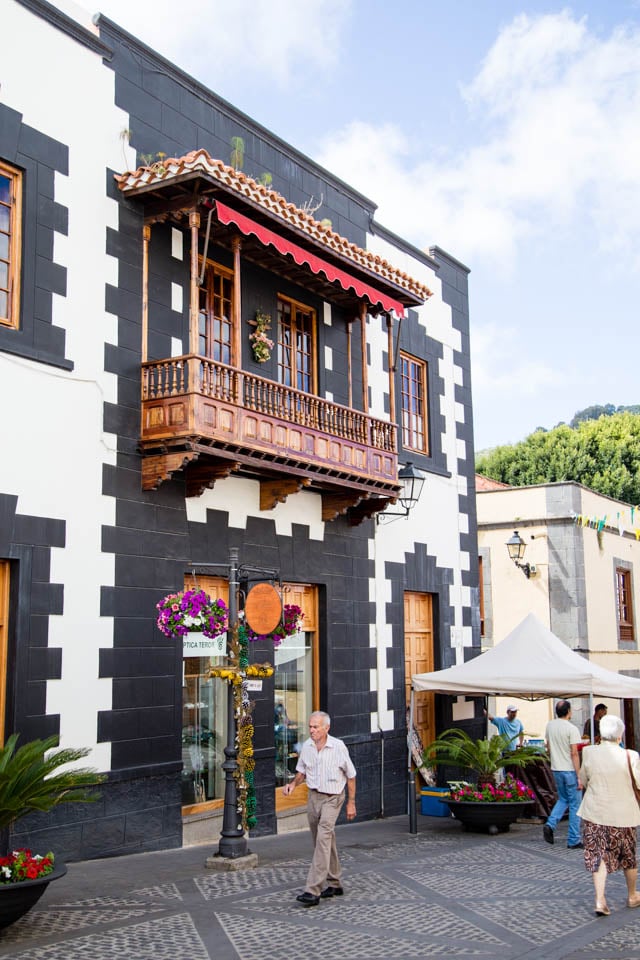 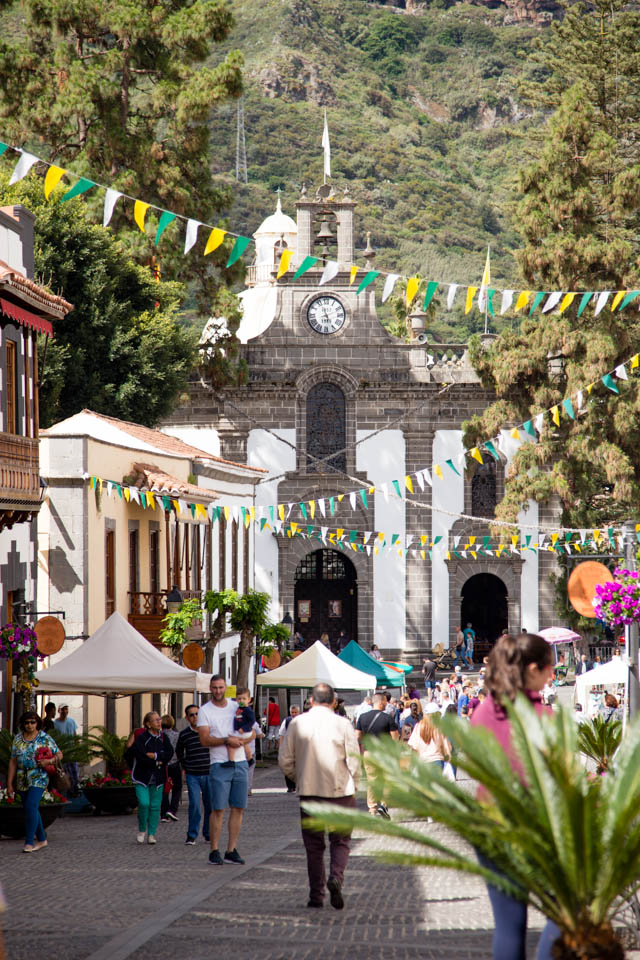 On market day the streets are buzzing as people shop and catch up with friends. 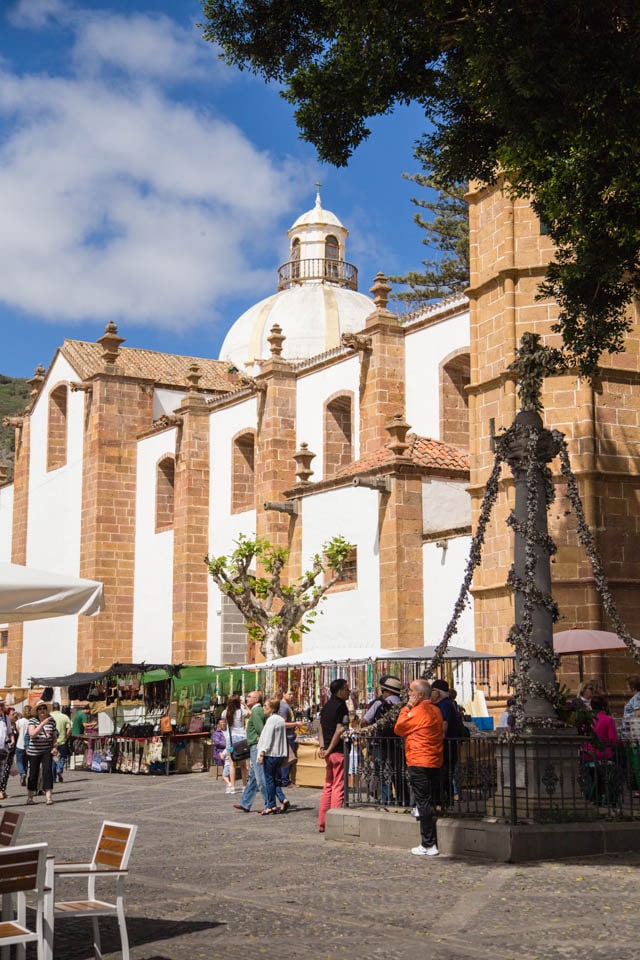 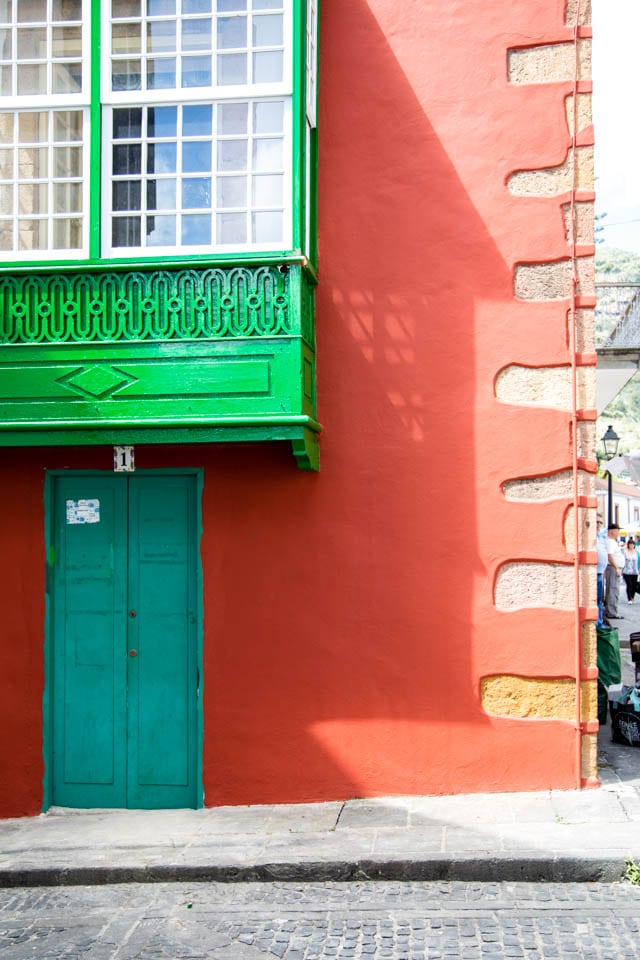 We took part in a market tour organised by ANFI Experiences who will organise everything for you and pick you up from the resort. 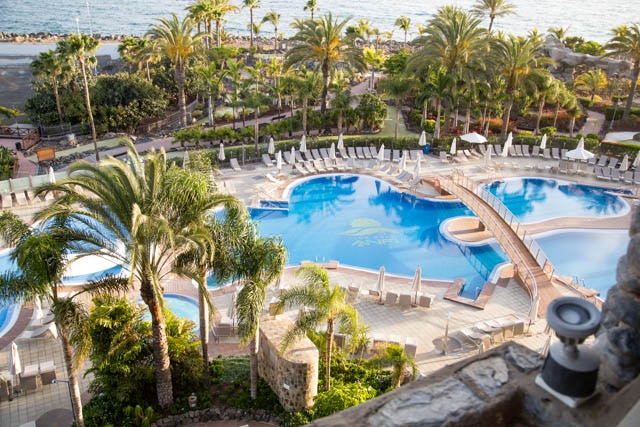 The ANFI group was founded in1988 by Norwegian, Bjorn Lyng.  There are five clubs next to each other on the South West corner of the island.  Most are built into the coastal cliffs, which initially is a little confusing as the road access and reception is at the top, rather than bottom of each building.  Apartments are mainly one and two bedroom up to the newly refurbished 4 bedroom luxury Grand Imperial Suite – ideal for holidays for the extended family. 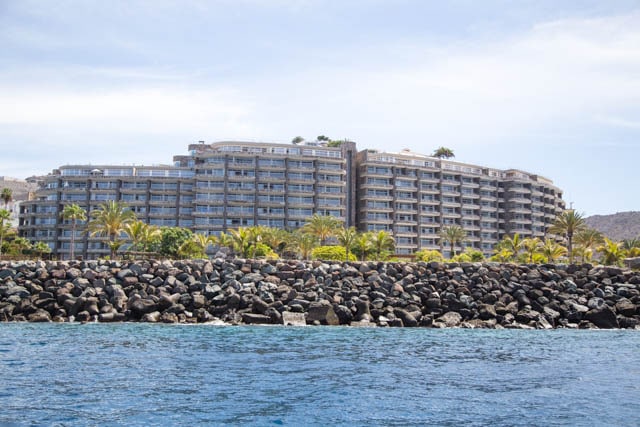 Apartments are spacious, all with large sea facing balconies, are immaculately clean and neutrally decorated to cater for all tastes.   I shared a two bedroom apartment, each with large en suite and huge living, dining area with a massive balcony. 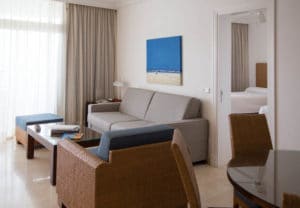 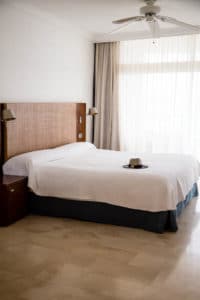 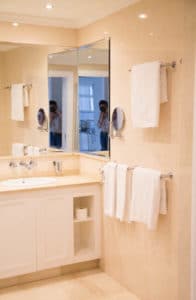 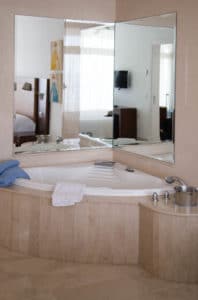 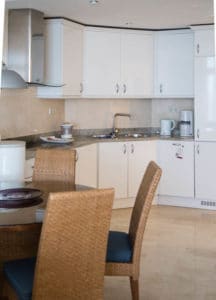 The founding ethos of ANFI is a home away from home luxurious experience.   The apartments were comfortable and well equipped and staff friendly and eager to help, as well as greeting the guests like old friends.   We were told that staff turnover is very low so guests do get to know the staff, which adds to the home from home feel and I can see why people come back year after year for a relaxing break – as you know where you will be and exactly what to expect with no pressure to run around seeing everything the destination has to offer.

With the comfortable apartment, the oh-so-chic Maroa beach club on the heart shaped island, and pilates and yoga classes of a morning I’d have quite happily moved in and worked remotely for a good few weeks. 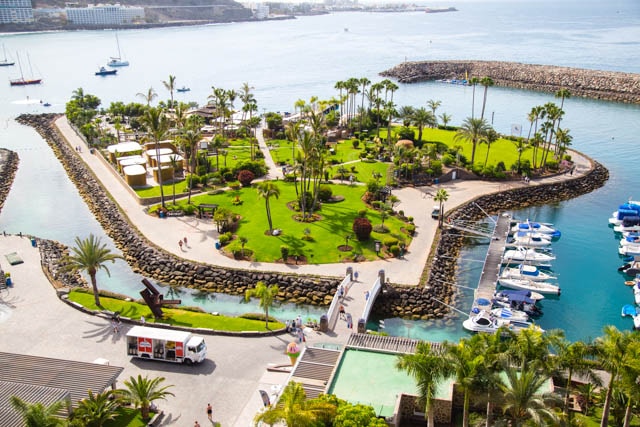 Other activities available in the resort are all manner of water sports, including paddle boarding, numerous golf courses near by, jet skiing, sunset motor cruise and snorkeling as well as kids clubs and a variety of restaurants.  If you want to get out and explore Gran Canaria, ANFI experiences have a wide range of excursions including the market tour, visit to Las Palmas and a day trip to Tenerife. 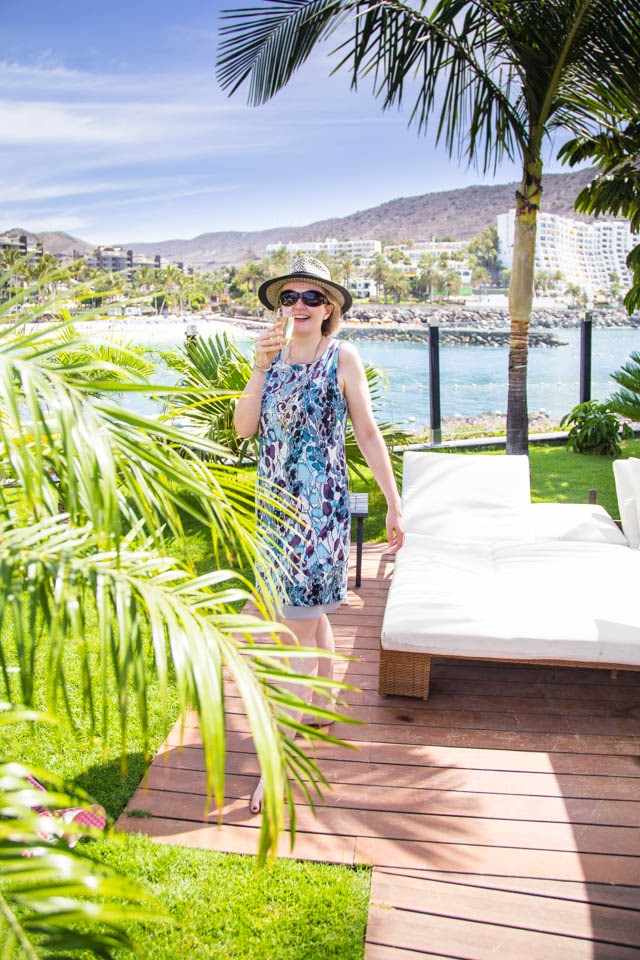 Apartments at ANFI cost between €13,000 to €70,000 for one week a year for 50 years.   Modern timeshare has come a long way and once you are a member at a club like ANFI you have access through RCI to over 3700 luxury resorts worldwide that you can exchange your week at ANFI for, which, like ANFI, you would not be able to book without being a member.

We visited Gran Canaria as part of a press tip hosted by ANFI group.  All opinions our our own. Read more about ANFI here.