You are here: Home / Travel / 7 Good Reasons to Ski in Courmayeur, Italy

Why I am a convert to skiing in Italy. 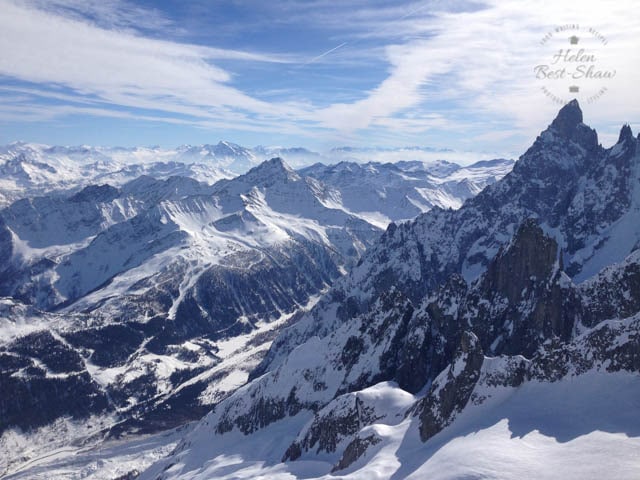 I came to skiing later in life.  I did have a few ski holidays when I was a child which, as I was not naturally sporty, were not the greatest of successes, tried a few times as an adult and never really got it.  I ended up skiing on blades and sticking to just the blue runs.

It all suddenly clicked into place two seasons ago, after I’d had life changing eye surgery to correct my inward turning left eye.   Successful surgery left me with a cosmetic improvement – my eyes looked in the same direction and could both focus in the same place – as well perfect stereo vision, and the depth perception that I did not know that I had been missing.   I vividly remember the night that I realised just how important my new found stereo vision and depth were – walking down a busy road at pub closing time one Friday night I could weave in and out of the other people without feeling that I was going to bump into them as I had done before.

It turned out that depth perception is also pretty crucial for skiing too, at the best of times there is not that much contrast on the piste, and seeing with both eyes means you can judge where to turn so much more easily.    I am absolutely sure that many many people ski far far better than I do, with one eye, but I am so immensely thankful to everyone at Moorfields Eye Hospital and our wonderful NHS for sorting me out.

Last year was my first experience of skiing in Italy, and absolutely my favourite destination so far.   We stayed at the Chalet Hotel Cristallo in Courmayeur, run by Mark Warner, who we skied with last year.  Courmayeur sits in the top North West corner of Italy at the top of the Aosta Valley, just behind Mont Blanc. 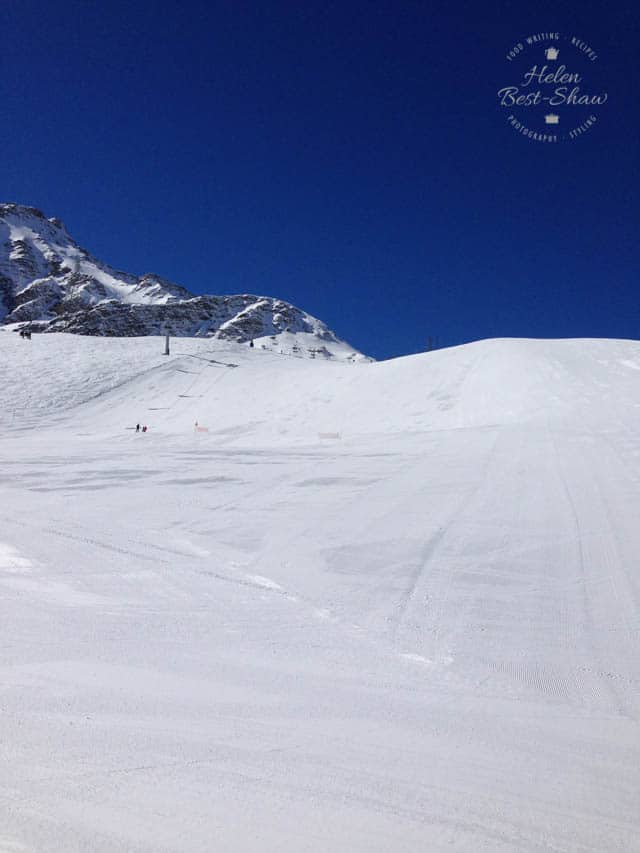 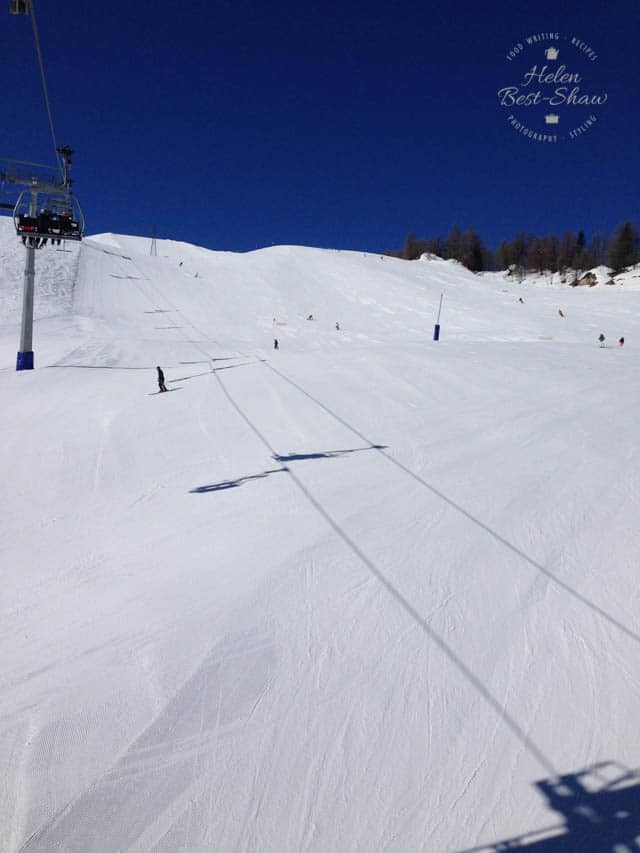 Seriously when did you ever see such empty slopes in a French resort? These are the main runs in the resort in the middle of the day – short of owning your own private resort I cannot think how you could have more space to yourself.   Admittedly it was a little bit busier on the Sunday afternoon we arrived (the following weekend was Easter and it was busy then) but still relatively deserted. 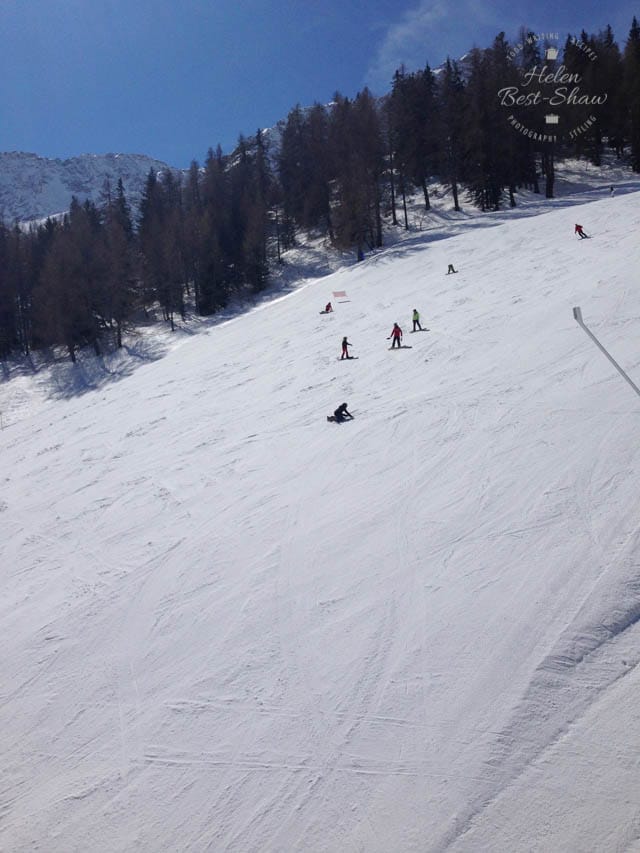 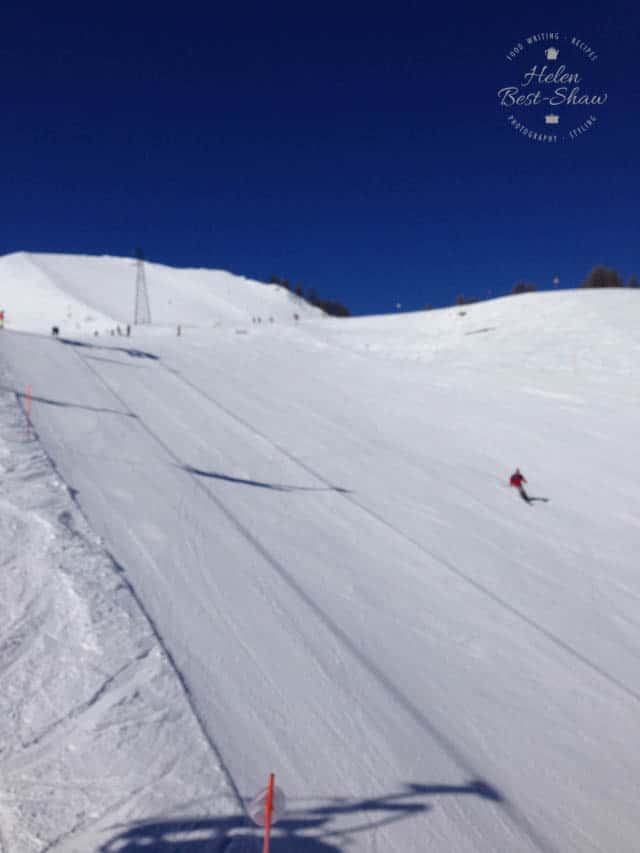 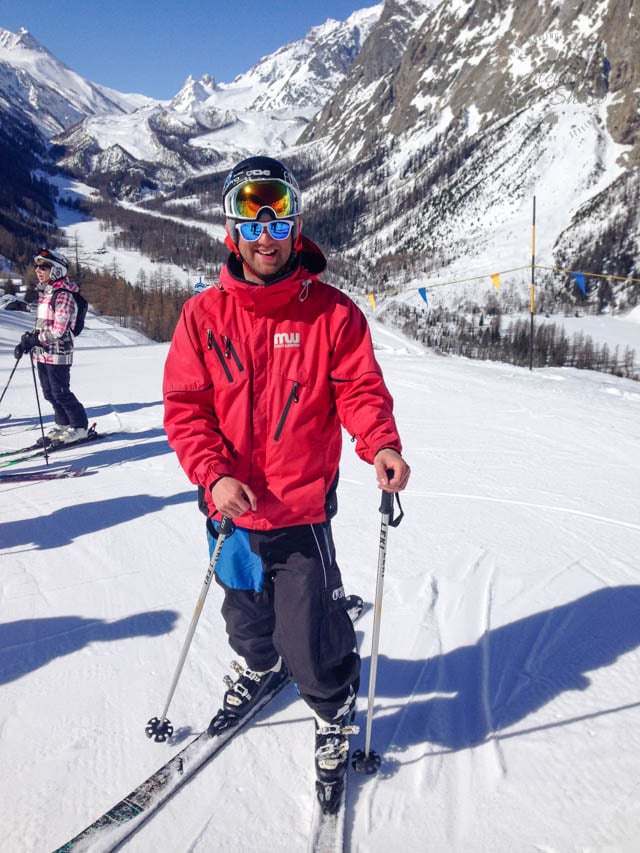 With a ski host you will always get the best of any resort whatever the conditions or weather.  Ali, our Mark Warner host knew the resort like the back of his hand and we had a thoroughly enjoyable days skiing on the best slopes every day, we had a carefully chosen different coffee and lunch spot every day.   Our chalet had two groups, the advanced and a slower group and we all met for lunch every day.

The ski hosts are not allowed to teach you, but do offer gentle encouragement, and is a far safer way to ski, as you are in a group and not on your own, are not going to be taken anywhere that you won’t be able to manage. It is perfect for me as my regular ski buddy is a more accomplished and faster skier than I am.   If you do get into trouble they are also wonderful at sorting things out (more on this later).

Sadly the ESF (French ski school) successfully lobbied to stop al the ski hosting in France, unless it is official guiding with a qualified instructor, which makes the service much more expensive, and from my point of view is a reason to consider not skiing in France.  Many Italian and Austrian chalets offer ski hosting, but check the number of days – we had 4 and a half in our week.

Italian mountain food is infinitely better than French, as well as much more affordable.  You can get a great lunch for EUR10 everywhere in Courmayeur, usually in an atmospheric mountain restaurant with waitress service, with none of the miserable self service cafeterias with expensive and soggy chips.  I enjoyed crispy, fully laden pizzas, al dente pastas, rich stews and succulent slow cooked meats and well as local cheeses, meats and polenta dishes.   Of course the Italians also make excellent and affordable Prosecco which is a bonus! 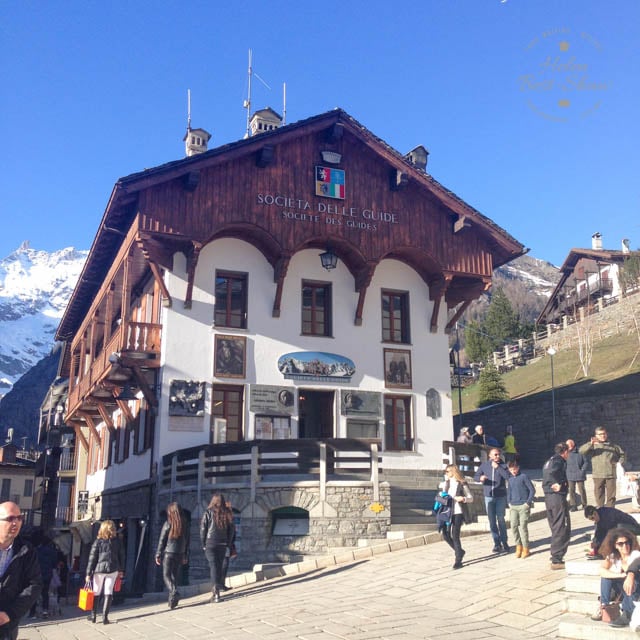 Courmayeur is an attractive and historic mountain town, with plenty of old buildings.  The main street is dominated by the home of the Society of Mountain guides where you can book guides, off piste skiing, heli-skiing and other excursions.   The building also houses a museum.

As you would expect the high street is a mix of hotels, shops, restaurants and bars including a chocolate shop, bakery and several delis.  Well worth a wander around. 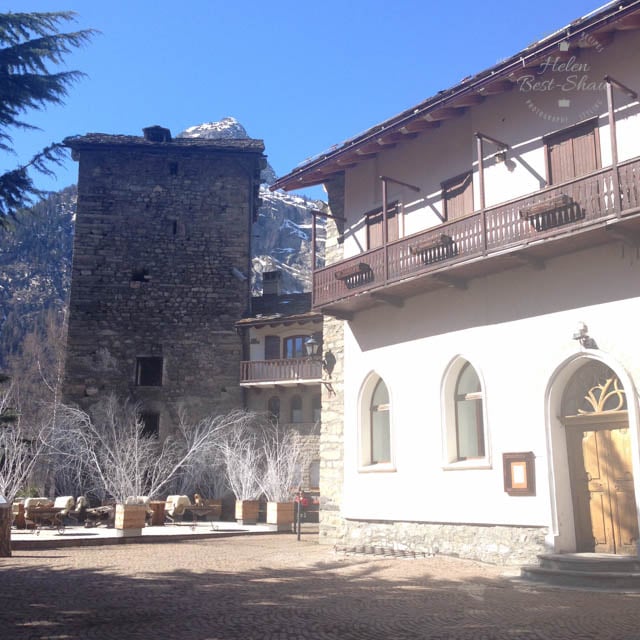 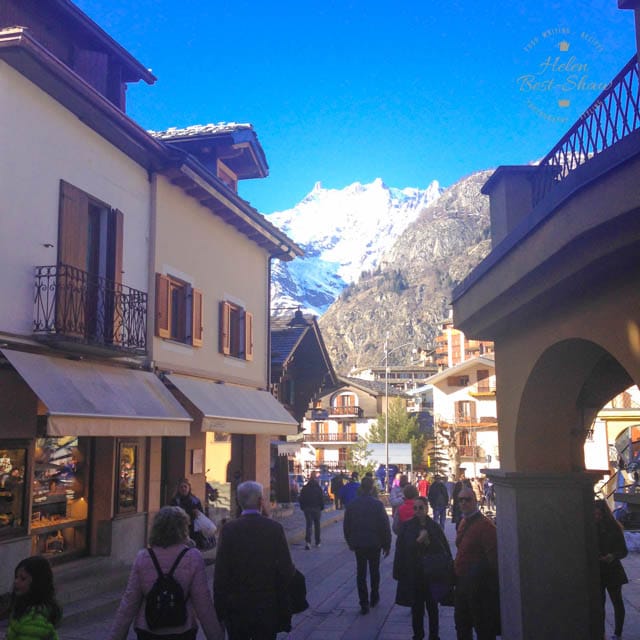 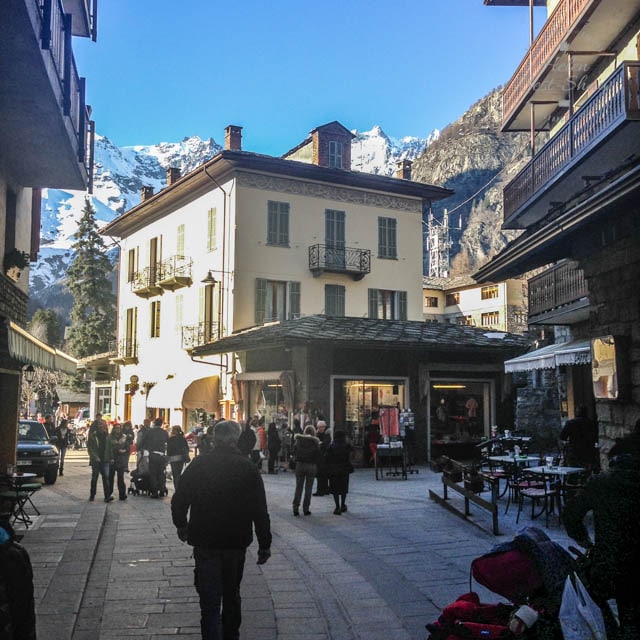 Because of the Mont Blanc Tunnel it is a relatively speedy transfer from Geneva 60 miles away to Courmayeur, which means you can ski for 2/3 of your first day and do not have that much of a horrendously early start on the day you leave.

The main ski hire shop, which sits a stones throw from the big cable car to the main slopes has ski lockers.  Hurrah!  Not too much walking around in boots carrying skis.  They are heated too so your boots are dry and toasty warm first thing. 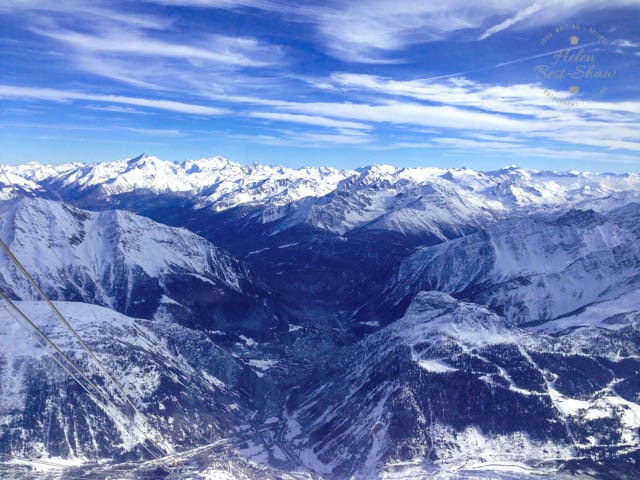 View from the Mont Blanc Skyway down the Aosta Valley – if you know where to look you can see the valley that resorts such as Val d’Isère and Tignes are in.

The Mont Blanc Skyway opened in 2015 and cost an eye-watering 110M Euro to build.   It is an absolutely stunning feat of engineering and I think one of the wonders of the modern world.  It is a short bus or taxi ride from Courmayeur, or you can easily ski to the base station.

You take two cable cars from the base station at 1,300m to the top at 3,466m.  The best part is that both the cable cars do one slow 360degree rotation on both the way up and down so you don’t miss any of the view, I could have quite happily gone up and down several times. 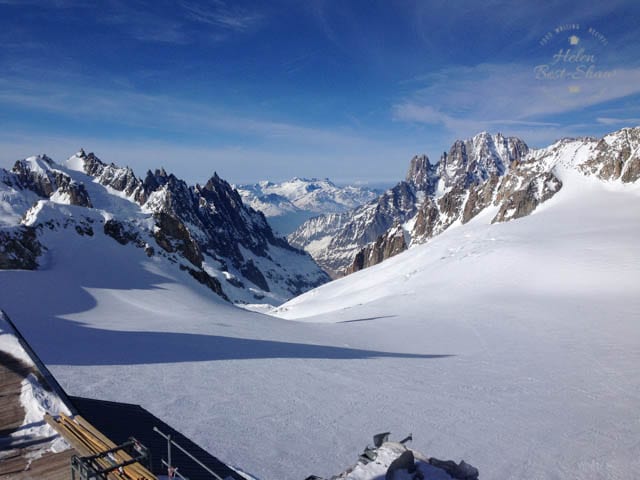 The Skyway is included in your lift pass so there is no excuse not to go.  Wrap up warm as it is cold and very windy at the top.

My last good reason is one to ski with Mark Warner is that their staff were were absolutely amazing when I had a ski accident on my second to last day.  I firmly believe that if you go skiing on a regular basis sooner or later you are going to have an accident of some sort.  Helmets and modern gear both decrease the risk and the severity, but however careful you are accidents happen.  I was about 100 yards from the end of the last run of the day.  I remember saying that I was tired and was going to stop.

I misjudged a turn and ended up standing facing outwards at the edge of the piste in loose snow.  I turned round to ski, and went splat as I slipped on the loose snow. My ski rotated one way and my body the other, agonisingly twisting my knee which went snap.  I remember lying in the snow screaming for someone to “please get that £$%^ing ski off” (I might have sworn but I was still somewhat polite).  Had I been actually skiing the force of the fall would have released my bindings and the ski would have come off, and usually when you fall from standing you do so sideways with everything intact apart from your dignity. Unlucky.

However although I could stand, it was very apparent that I would neither ski or walk to the end of a relatively gently and flat piste, so I had to be loaded into a stretcher and “blood waggoned” off the mountain.    Those mountain rescue guys can certainly ski and it was probably the most terrifying 30 seconds of my life.   You go very fast, and being so close to the ground makes feel even faster.  I’d not like to be stretchered off a steeper slope, and hopefully once is enough.

Once I realised I could stand I refused all the treatment at the medical centre, my reasoning being that I was going home the day after next and did not want to end up spending hours in the hospital, and it was something I could get sorted out once home.  To make everything more complicated we’d gone to a different resort for the day and I needed to get a cable car down the mountain, and climb back onto the coach to Courmayeur.

Back in Courmayeur the Mark Warner team could not have been better or kinder, coming to meet the coach by car to get my back to the hotel, taking my skis back to the hire shop, booking a physio and taking me to and from appointments the next day.  They didn’t quite offer assistance to get me in and out of the bath, but I am sure that had I not been with a friend they would have helped with packing if needed.    I think that how things work when something goes wrong that gives the best measure of a resort team, and they certainly measured up, and I am immensely thankful.

Back at home it turns out that I ruptured my ACL (one of the ligaments at the front of the knee and, apparently, a very common footballing injury), it took about 4 weeks for me to be able to get my leg completely straight and to be able to kneel on it, and I’ve been doing lots of exercises ever since.   My consultant tells me that it should be OK to ski on, and I can certainly run and do all sports apart from anything needing lots of pivoting.  So it is off to the Snow Dome in the next few weeks to see if I can ski on it, and to book a holiday if I can, or to arrange reconstruction surgery if I can’t.  Either way I’ll be back on the slopes in 2017. 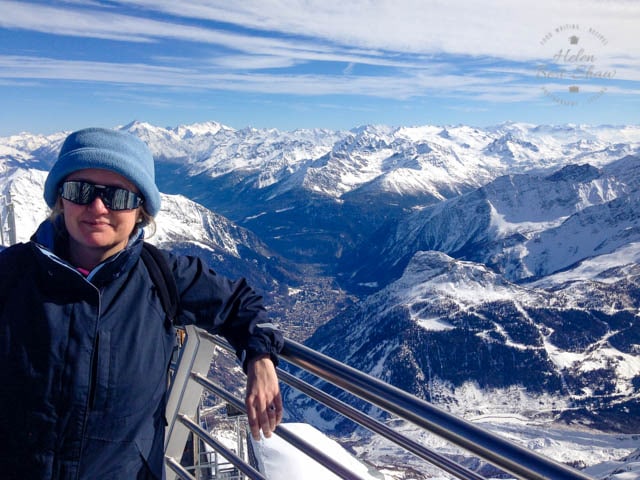 Me at the top of the Mont Blanc Skyway

We received a discount from Mark Warner for our holiday, and many thanks again to them for being awesome.