You are here: Home / Other / Beer Can Chicken 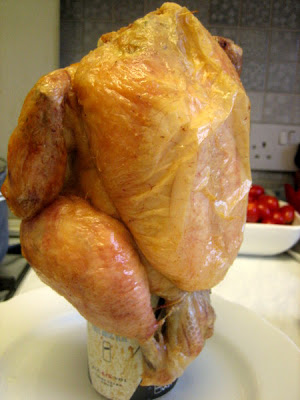 BBQed Beer Can Chicken (or the cruder Can up the Butt Chicken) crops up across the internet and on different forums with enough regularity to make me wonder what all the fuss is about. Surely an upended chicken sitting on a partially full beer can and roasted is not going to be that special? Is it? There is even a website selling the poultry pal a device to cook your Beer Can Chicken with no need for a beer can at all! Such is the apparent popularity and ease at which culinary heights can be reached with this device the website has special prices for a set of five or more – all of which can roast a turkey up to 14lb! I have lived so far with no need to roast more than 2 chickens in one go – maybe there has been a large gap in my culinary endevours that cooking a Beer Can Chicken will expose and I will need devices to cook up to 70lb of poultry at once.

1 chicken – size depending on how many you wish to feed and size of your oven
1 can beer or lager – the taller slimer cans are probably best
S&P;

Preheat oven to GM5 / 190, put shelf on lowest height or on floor of oven, ensuring that there is some gap between bottom of oven and the shelf. 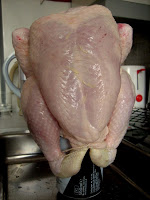 Open beer and drink about a fifth of the can. If you like poke some slices of lemon into the beer.

Wipe chicken amd the cavity with kitchen paper and season with salt and pepper.

When the skin is golden and crisp removed from oven and slide chicken off can of boiling beer. This is the hardest bit of the entire process and did need another pair of hands.

The chicken was lovely, crisp skin but the flesh was tender and moist and; considering that I had bought a cheap supermarket chicken, tasted delicious and very chickeny with bags of flavour.

It was well cooked with the flesh falling from the bone, cooking time needs to be less than the usually suggested roasting time of 20mins per lb plus 20 mins, this would be because the chicken steam and cooks from inside too.

A huge amount of fat dripped from the chicken into the baking tray which certainly made the chicken feel healthier, but the inside of my oven is now coated with fat, I have just read that a layer of salt in the roasting tray will absorb the fat and prevent it splattering all over the oven. Having better things to do than clean my oven I just whacked it up to full temperature for 10 mins to burn the fat off, having opened the kitchen window and removed the battery from the smoke alarm.

I am not convinced that using beer in the can actually made any difference – so will soon be making another beer can chicken on a beer can of stock or water.

I was diligent and also made stock from the chicken carcass, now in the freezer for soup.

Crack a can of beer, eat my chicken and then have some beer jelly for dessert!