You are here: Home / Recipes / Baking / Bread / Recipe: Panettone – Fresh From the Oven & an Introduction
Jump to Recipe Print Recipe 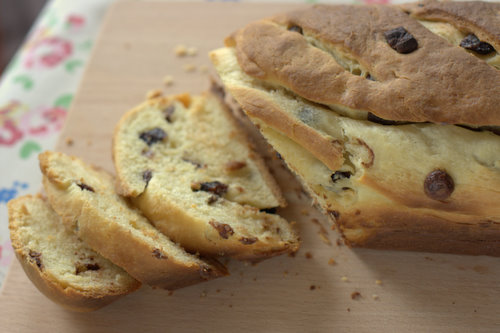 Once again it is the end of the month, and there is another Fresh From the Oven Challenge, this month panettone, chosen by Sarah at Maison Cupcake.   I am doubly proud of myself this month as I have both: –

I am still suffering from the dreaded blog backlog, and despite never learning from my mistakes, already have much of my January content planned (it is a themed month which I am really looking forward to).

Christmas has come early in the Fuss Free kitchen, and I’d like to introduce you to Fifi La Firecracker, who arrived on Friday. 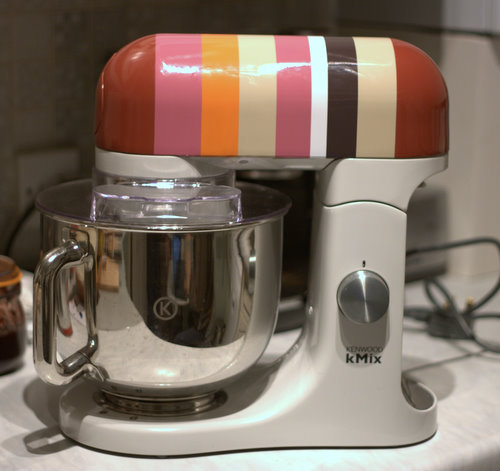 I am already smitten, and the very pretty Fifi (everyone does name their stand mixers surely?) has been put through her paces several times making dough, cupcakes and buttercream.   I am very appreciative to Kenwood who gave me the mixer for review and extensive testing.

I have already realised that I need slightly relearn making bread, as I up until now I have done it by feel, not appearance.  Already I realise one of the major benefits of a stand mixer is that I can leave Fifi to do her stuff whilst I fill the dishwasher, wash up or put things back in the cupboards.

Back to the panettone, which was delicious, although mine was slightly heavy, caused either by out of date and thus sluggish yeast, or overzealous kneading in the mixer.     Sarah suggested using an Ikea cutlery drainer in place of a panettone tin, I have neither so baked in a standard loaf tin, not as pretty, but does the job perfectly.   I added raisins, chopped dried apricots, and chocolate drops (suggested by the GBBO book).  Usually I am a  fan of chocolate, but it did not quite do it for me here.  Next time I make panettone I think I’ll leave it out.  Sarah’s recipe, directly from the challenge is below.

If you try this Recipe: Panettone – Fresh From the Oven & an Introduction please tag #FussFreeFlavours on Instagram or Twitter. It is amazing for me when for me when you make one of my recipes and I really do love to see them. You can also share it on my Facebook page. Please pin this recipe to Pinterest too! Thanks for reading Fuss Free Flavours!
4.91 from 11 votes 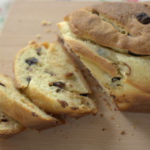 based on "Great British Bake Off: How to Bake"

Makes enough to fill a 15cm tall cake tin or panettone mould. Bear this in mind if improvising with smaller round tins.

If you blog and are starting to think about next year, and new year’s resolutions then why not sign up to join Fresh From the Oven?

And once again, a huge thanks to Kenwood for my shiny stripy Fifi La Firecracker K-Mix!