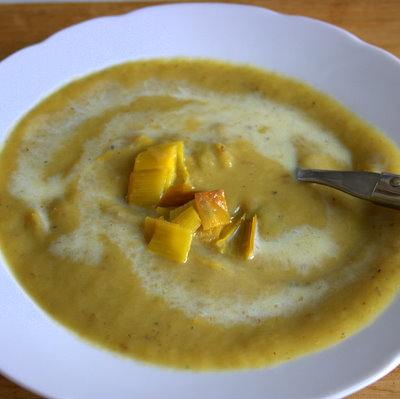 This is my second recipe written for the Food Co-ops and Buying Groups project run by Sustain – also part of the Making Local Food Work programme funded by the Big Lottery.   I made this a couple of weeks ago with onions, leeks and potatos from my first “bag” from the co-op.  Again I have tried to use a minimum of ingredients that were not included in my vegetable bag.

I had an enormous leek and stacks of potatoes and onions.   It was an overcast damp day so leek and potato soup seemed a perfect use of my vegetables.   I wanted to make a soup that was slightly different from a traditional vichyssoise and so decided to roast the leek.   This both sweetened and tenderised it; greatly intensifying the flavour.      I  did not peel my potatoes, the skin contains lots of nutrients, most of the taste and why make extra work for yourself?      The combination of the intensity of the roast leek and the earthiness of the potato peel made a delicious and satisfying soup, far more interesting than the usual vichyssoise.   As I live in a flat with no outside space or compost bin I was also very pleased that the only parts of my vegetables in the bin were the onion skins.

I use an Argos Value handblender to blitz, a bargain at less than £5.   I have had it several years.   It does a fantastic job, better then previous blenders at several times the price.

This soup freezes well and is also delicious served chilled.   Quantities are approximate – use the vegtables that you have.

If you try this Roasted Leek Vichyssoise – The New Leek and Potato Soup please tag #FussFreeFlavours on Instagram or Twitter. It is amazing for me when for me when you make one of my recipes and I really do love to see them. You can also share it on my Facebook page. Please pin this recipe to Pinterest too! Thanks for reading Fuss Free Flavours!
4.8 from 5 votes 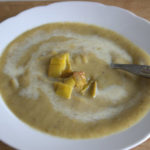 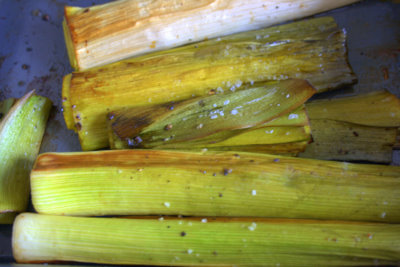