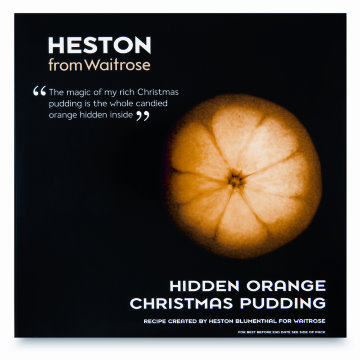 Currently there is a certain amount Internet and media frenzy about Heston’s Hidden Orange Christmas Pudding from Waitrose.    Thanks to clever marketing by Waitrose the resulting publicity has ensured that the puddings had completely sold out before the end of November.    Consequently they have become even more desirable, with puddings listed on e-bay selling for many times the £13.99 store price.  Waitrose say they are making more puddings, but I imagine that with half the UK blanketed in snow, and as usual unable to cope, there could well be a few logistical problems, which undoubtedly is music to the ears of the e-bay sellers. 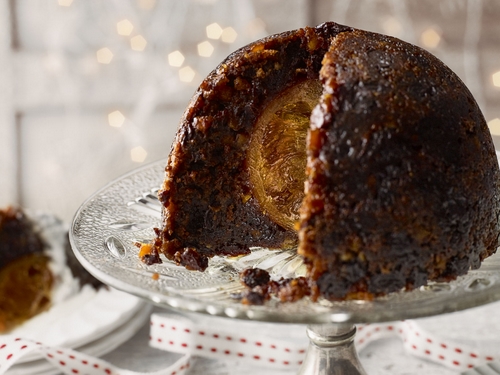 I was contacted by Waitrose several weeks ago and offered a pudding for review.  It arrived a few days after, beautifully wrapped in brown paper.     As the pudding serves 8 – 10 I asked a few friends round to help test it.  For any of my non UK readers, who may have missed the pudding being in the news, there is a whole candied orange hidden in the middle of a traditional looking Christmas pudding.  The idea behind it being that the orange will infuse the pudding with flavour (I think I read that the idea was inspired by a Sussex Pond Pudding).  I am sure that given the publicity very very few people are going to be remotely surprised if they are served a pudding with an orange inside it on Christmas day.

Firstly I was slightly disappointed that after cooking and turning out the pudding started to slide off the orange in the centre.  This could well have been because I microwaved, rather than steamed the pudding for 3 hours, having read the cooking instructions too late. (The packet does clearly state that the pudding can also be microwaved however).

This hidden orange pudding is very very rich indeed, it is very very nice and would easily serve 8  – 10 people, especially after a full Christmas lunch or dinner.      After a fairly light main course I struggled to eat a slice.    It is very good, sticky and brimming with nuts and fruit, all infused with orange.   The hidden orange in the centre of the Christmas pudding is perfectly candied and tender enough to eat easily with a spoon and fork.    I think that the centre orange was slightly too big for the size of the pudding, with a resultant of slightly too much orange per serving.  This pudding is quite different to the puddings I am used to, and grew up on. 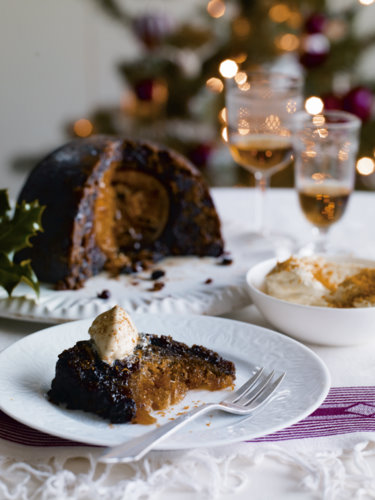 If your tastebuds do not enslave you to tradition, and thus the same pudding every year, and if you do not make your own puddings; I would recommend giving Heston Hidden Orange Christmas pudding a go, if you can get hold of one.   Heston is a genius, and tradition with a theatrical twist is his speciality, it is a different idea and a great pudding to serve on Christmas Day.   I am sure that lots of variants of the concept will pop up over the coming weeks, I already have a couple of ideas.

If you are desperate for the now unobtainable pudding here is Mat Follas’ (winner of 2009 Masterchef) creation of his take on the pudding.

Heston’s Hidden Orange Christmas Pudding is available from Waitrose (when they get more stock) for £13.99. Updated: the 2014 price is £15.

Thanks to Waitrose for my free sample pudding.