You are here: Home / Other / Sussex Pond Pudding 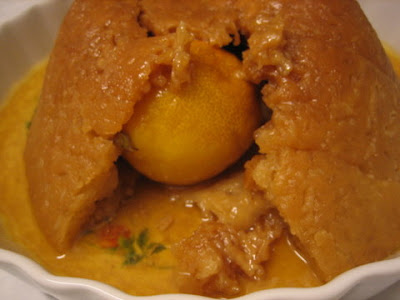 A classic British pudding for British Food fortnight. It is a steamed suet lemon pudding, which when you cut it open a buttery syrup sauce flows out making the pond. Making this British classic I was reminded of the time that I made Toad in the Hole for two Australian friends, both new to the UK – “Is it like Frog in the Pond*” they asked, having never heard of Toad or even Yorkshire Pudding, both were surprised to be served a savoury dish!

However I digress, back to the Sussex Pond Pudding. I have to confess that I was slightly very underwhelmed by the pudding, although the sauce was lovely, the suet was a bit tough. I asked one of the chefs at work about it and he suggested some liquid in the sauce or making the dough slightly stickier, or sprinkling it with water. 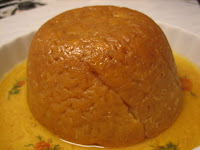 Make the suet pastry by mixing the suet, flour and salt nin a bowl and slowly work in the milk and water until you have a soft dough, cover the dough with cling film and allow to rest in the fridge for 30 mins.

Roll out 3/4 of the dough to a circle about 5mm thick and use to line a well buttered 1litre (2 pint) pudding basin. I find it easier to put my hand under the dough and lift it up into the upturned pudding basin, rather than lowering the dough into the basin. Push the dough against the sides of the basin.

Add half the cubed butter and sugar, prick the lemon all over and place on top of the butter/sugar mix, add the remainder of the sugar and butter.

Roll the remainder of the dough to make a lid, lay it on top of the butter and sugar and pinch the two layers of dough together to seal. Cover with a sheet of pleated foil secured with two elastic bands (they can perish and snap so its safer to have two).

Stand the pudding on a trivet (I use a jam pot lid) at the bottom of a large saucepan or stockpot, fill to half way up with boiling water, cover and gently simmer for 3 and a half hours, topping up the water as necessary.

Take the pudding out of the pan using oven gloves, allow to rest for a few minutes, remove the foil and place a deep dish over and flip upside down to turn out. Do not worry if lots of sauce has pooled on top of the pudding it will be fine when it is served the other way up.

The butter and sugar would have mixed with the lemon juice to make a lovely caramelised sauce that smells divine and will flow out when the pudding is cut. Serve with lots and lots of whipped cream and worry about the calories another day!