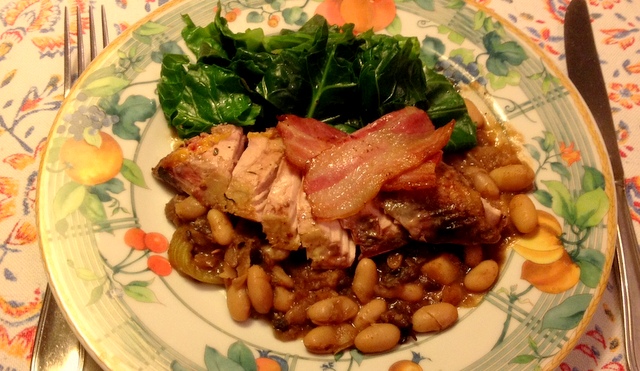 There is a (I am sure apocryphal) story of the American couple in their hire car touring the glorious English countryside who hit a pheasant. They stopped and regarded the wounded bird with one flapping and one broken wing with horror, a battered car pulled up and out stepped a yokel who looked them and the pheasant up and down; “Them pheasant’s valuable birds. His Lordship ain’t going to be happy” he said.  “What do we do?” they asked with a certain measure of alarm. “I’ll take him to the vet for you – it will be about £50”.  The cash was handed over and the pheasant disappeared into the boot of his car, destined for the pot rather than the vet.

I was reminded of this yesterday.  When driving through Berkshire we nearly hit a pheasant and remembered that if you do hit one you are not allowed to pick it up, but if you find a dead bird on the road it is all yours for the taking.  If you drove in convoy you possibly might be within the letter but not spirit of the law. My other pheasant story is from years ago when I was Ed’s lodger for a few months, I opened his freezer and was greeted by two whole feathered pheasants, remarkably, despite being frozen solid, they were not at all cold to the touch, and I was struck at just how good insulator feathers were.

This recipe is partially inspired by my harissa roast chicken with beans and lentils, I generally try to follow a low GI/GL diet so I am used to adding beans and lentils into dishes.  I usually soak and cook them from dried, but here I used a tin.  Your whole meal in one pot, with no need to make gravy.

I started roasting the pheasant upside down, that way the back fat renders down and trickles into the drier breast meat.  Flip over half way through cooking.    Make stock from the carcass and add in the left over beans and some more vegetables for a hearty broth for the following day’s lunch.

If you try this Recipe: Roast Pheasant With Bacon, Prunes, Apples & Beans please tag #FussFreeFlavours on Instagram or Twitter. It is amazing for me when for me when you make one of my recipes and I really do love to see them. You can also share it on my Facebook page. Please pin this recipe to Pinterest too! Thanks for reading Fuss Free Flavours!
5 from 1 vote 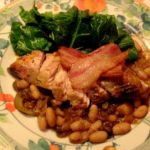