Slow-cooked to tender perfection, this Spanish pork stew is robust, warming and full of flavour. Full of healthy vegetables and light on calories, it’s a taste of the sunny south to brighten winter evenings. 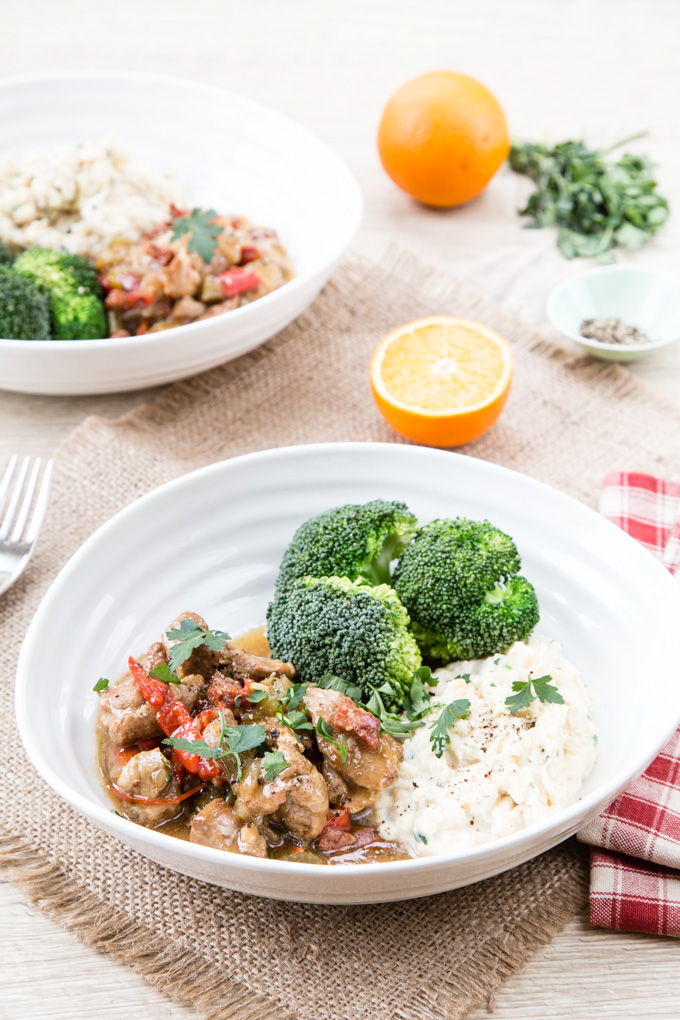 For years, we worked long hours in an office. In winter, I always felt tired and grumpy from the lack of light. It was dark when we left home and dark when we left the office. All too often I ate lunch at my desk, missing out on winter sunlight. I have changed my life since then, but it is a plague that affects too many of us.

When I got home I wanted my supper straight away, which meant I didn’t have time to cook the gutsy casseroles that I enjoy when it is dark and cold outside. I finally solved the problem by buying a slow cooker; they’re not expensive – you can buy one for as little as £10.  All you need is one with high, low and warm settings.

My slow cooker proved invaluable. I would leave it on all day while I was at work so that my dinner was ready when I got home. The food would never burn or dry out if I was late back (despite the worst efforts of the London Underground), and the contents of the pot would be delicious.

I work from home now, but I still love my slow cooker. It uses the same amount of electricity of a lightbulb and it transforms cheap, tough cuts of meat to melting, mouthwatering tenderness.

It won’t greet you at the door with a hug or pour you a glass of wine, but it is one pot cooking at its best. If you are still not sure you need one, this slow cooker pork casserole will convince you! 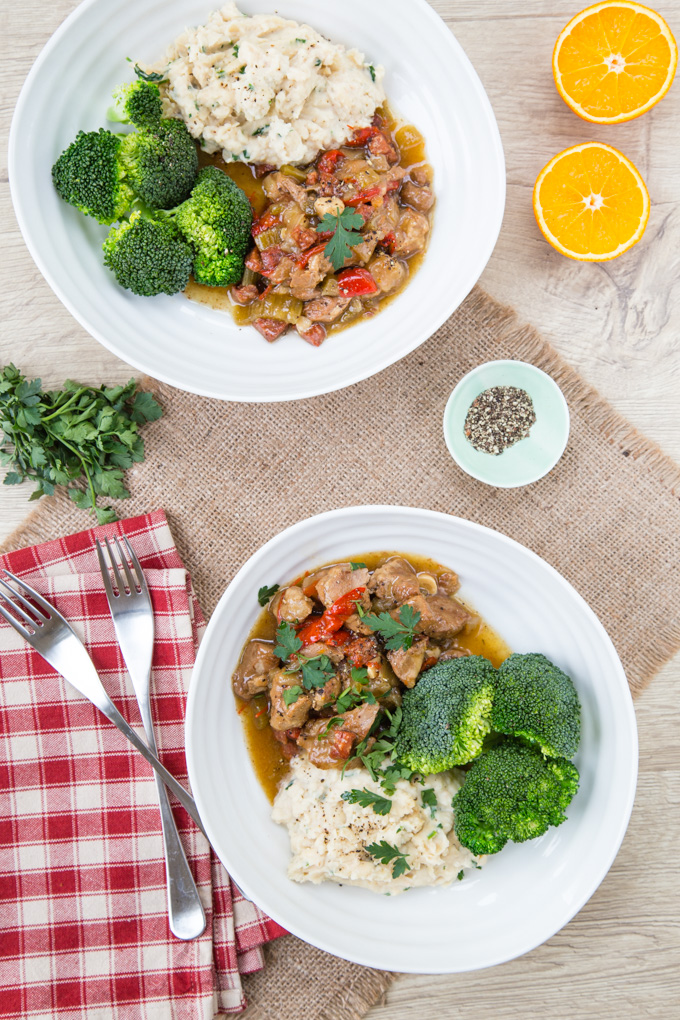 This slow cooker Spanish Pork Stew with chorizo is one of my favourite slow cooker dishes. A variation on olla podrida, the traditional one-pot casserole, it is full of rich and vibrant Spanish holiday flavours.

I find it’s the perfect winter pick-me-up for cold northern nights. It’s very easy and like most stews, can be adapted to use whatever is in season or to hand. It also takes very little hands-on time and can be prepared in advance. It freezes well too.

I pack my slow cooker pork casserole with plenty of vegetables for rich and complex flavour. That way, I know I’m getting my vitamins as well as keeping the cold out.

There are a few differences between slow cooker or crockpot cooking and the conventional method of making a casserole in the oven.  Generally you need to add less liquid to slow cooked dishes, as less is lost during the cooking process.

As with any really good casserole, this Spanish pork stew is not quite as simple as just chucking all the raw ingredients in and hoping for the best. You need to take a little care. With a little preparation the night before, however, a delicious meal will be waiting for you after that long day at work.

Unlike most of the dishes on this site, the quantities here serve six.

I usually cook for two, but if you are going to fire up the slow cooker, it makes sense to fill it and batch cook. You can easily freeze the extra portions and have an easy no effort meal waiting for you at home.

Why you will love this Spanish Pork Recipe 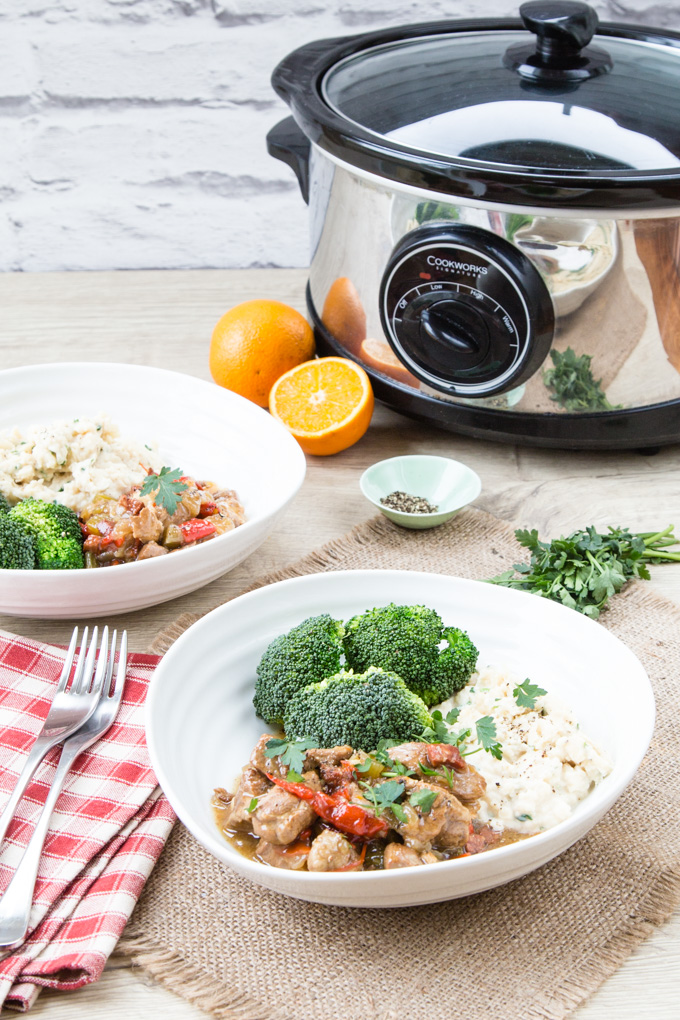 How to Make Slow Cooker Spanish Pork Stew with Chorizo

Step 1 – If not already trimmed and diced, prepare the pork by trimming any large pieces of fat and cut into 1″ / 2.5 cm cubes.

Diced pork shoulder is a good buy.  You can use a fattier cut, but then you will need to skim the fat off after cooking.

Cut the chorizo into chunky slices, then into quarters. Remove the skin.

Step 2 – Heat the oil on a medium heat, add the pork and chorizo (or bacon) and fry until lightly browned. It is best to do this in stages – leave some space around the meat as it cooks. Transfer the meat to your slow cooker.

Step 3 – Put the sliced onion, celery, peppers and garlic in the pan. Add the paprika and a pinch of salt and fry until softened. (You can skip but frying the onion gives a far better flavour.)  Don’t throw that celery end away, as it is packed with flavour – slice it thinly and add it too

Add the fried vegetables to your slow cooker.

Step 4 – If necessary, deglaze the frying pan. Add a little of the stock and give the pan a good scrape to get all the little flavour-filled bits up from the bottom of the pan.

Add the liquid and scrapings to the slow cooker.

Step 5 – Add the rest of the ingredients and give a good stir. Season with salt and pepper.

At this point you can put everything in the fridge for up to 24 hours.

If reheating from chilled, put the slow cooker on high for an hour and a half, then turn to low.

Step 7 – Half an hour before serving, check the consistency.

Cooking in the Oven

If you prefer (or don’t have a slow cooker yet), just cook this stew in the oven on a low heat for three hours.

My mantra for a healthy diet is to add extra vegetables whenever you can to every meal.   This dish is ideal for packing with vegetables.

If you try this Slow Cooker Spanish Pork Stew with Chorizo please tag #FussFreeFlavours on Instagram or Twitter. It is amazing for me when for me when you make one of my recipes and I really do love to see them. You can also share it on my Facebook page. Please pin this recipe to Pinterest too! Thanks for reading Fuss Free Flavours!
5 from 1 vote 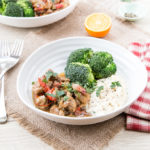 Slow-cooked to tender perfection, this Spanish pork stew is robust, warming and full of flavour. Full of healthy vegetables and light on calories, it's a taste of the sunny south to brighten winter evenings.

If you like this recipe, why not try my harissa roast chicken with beans and lentils, or my slow cooked ox cheeks?

Update Notes: This recipe was originally posted in December 2007, but was rewritten and republished with new photos and hints & tips in January 2020