Griddling is one of the easiest ways to cook asparagus.  This griddle asparagus recipe concentrates the flavour, and leaves a wonderful crunch.  Serve on its own or on bruschetta as a quick weeknight supper or starter for a more formal meal. 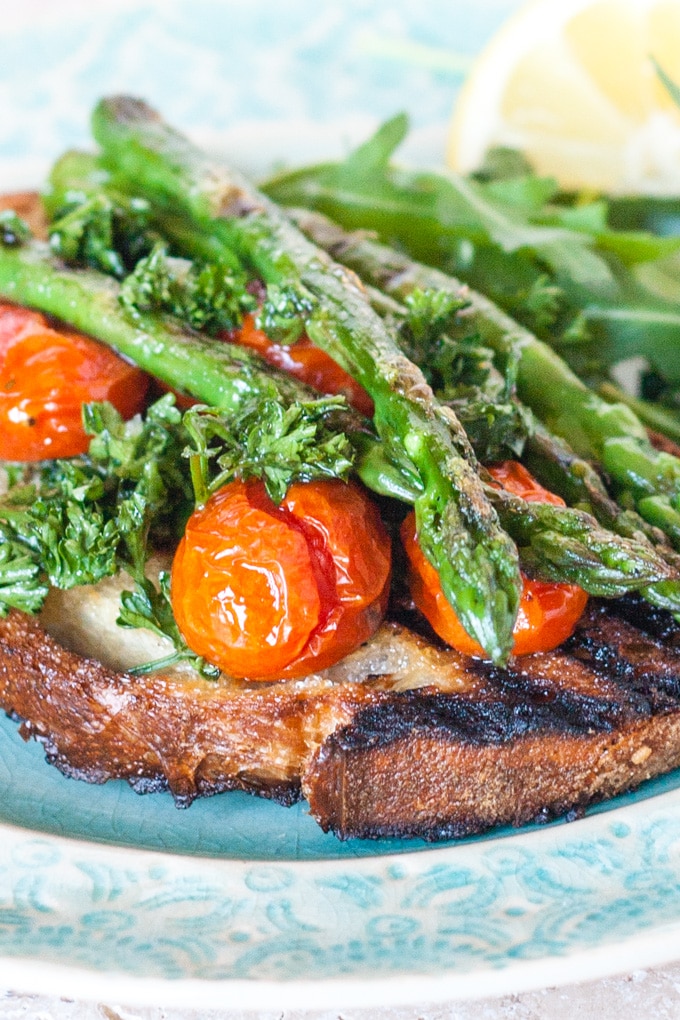 I love it when fresh asparagus returns to the shops. At the start of the season, simplicity is king. I steam it lightly and serve with lashings of melted butter and a generous sprinkling of crunchy sea salt.

Later in the season, I use it as an ingredient, making it the star of risottos and flans. Young tender asparagus is delicious raw and I also enjoy it in an asparagus salad.

Griddled asparagus makes a great alternative to the steamed variety. This griddle asparagus recipe concentrates flavour and adds a satisfying crunch. If you blanch the asparagus before griddling, you get perfectly cooked asparagus, lightly charred on the outside and tender in the middle.

When is Asparagus in Season?

The British asparagus season is from mid- to late April until mid- or late June, or traditionally, St George’s Day to the summer solstice. Of course, the dates will vary depending on the weather in any particular year. If you are buying locally, the season starts a little later the further north you live.

Interestingly, St George is the patron saint of farmers as well as England (and various other countries, regions and cities). Perhaps that is why the season is said to start on his feast day, 23rd April.

How to Buy & Prepare Asparagus

Buy the freshest asparagus you can find, making sure there is no damage to the tips. Ideally, all the stems should be about the same thickness. The stems and tips should be a deep green and no thicker than your little finger.

The thicker the ends of the stems, the tougher and woodier they will be, so you need to trim the spears. Snap or cut the bottom ends off, either where the spear breaks naturally, or where it turns lighter.

If you are feeling cheffy, you can cut the ends off so all the spears are the same length and then peel the outer layer off with a vegetable peeler. Thicker spears will cook slower than thin ones, so make a cut through the stem at the thick end.

There is plenty of flavour in the trimmings, so throw away the very woody bits and save the rest for longer cooking. They are great for making stock or soup. I usually steam the usable trimmings in the microwave. Then I freeze them for later.

I also pop a few bits in Herbert’s bowl because, like his owner, my dog loves asparagus!

How to Make Easy Griddled Asparagus

Step One – Trim the asparagus by snapping or cutting to remove the woody ends. If any stems are much thicker than the others, split the end.

Step Two – Place the asparagus in a sieve and pour a kettle of freshly boiled water over it to blanch it. 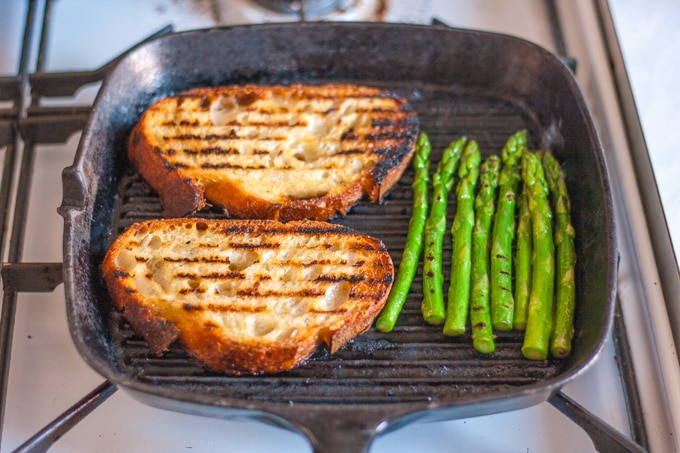 Step Three – Heat the griddle pan over a hot, but not fierce heat. Brush the oil onto the asparagus (and bread, if making bruschetta). Then place on the griddle for a few minutes before turning.

When using a griddle pan, always oil the food and not the griddle. If you oil the pan, the oil runs off the ridges and the food will still stick.

Step Four – Serve the griddled asparagus on the fresh bruschetta. Finish with a drizzle of extra oil and a sprinkle of sea salt. We sometimes like to add a few griddled cherry tomatoes too.

If you try this Easy Griddled Asparagus please tag #FussFreeFlavours on Instagram or Twitter. It is amazing for me when for me when you make one of my recipes and I really do love to see them. You can also share it on my Facebook page. Please pin this recipe to Pinterest too! Thanks for reading Fuss Free Flavours!
5 from 1 vote 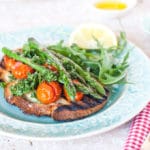 Griddling is one of the easiest ways to cook asparagus, producing deep flavour and perfect crunch.

Update Notes: This recipe was originally posted in June 2010, but was rewritten and republished with new photos, instructions & hints and tips in January 2020.

If you like this recipe, try griddled asparagus in this delicious salad. For a delicious vegan main, try my asparagus with fried tofu and charred capers.