You are here: Home / Travel / How to Spend 3 Days In Tinos, Greece 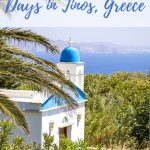 Tinos is one of the lesser known Greek Islands; with pretty villages, deep blue seas, amazing food, and a tradition of art and culture this Cycladian island is is a must visit. Easily accessible, it’s just 20 minutes from Mykonos by ferry. 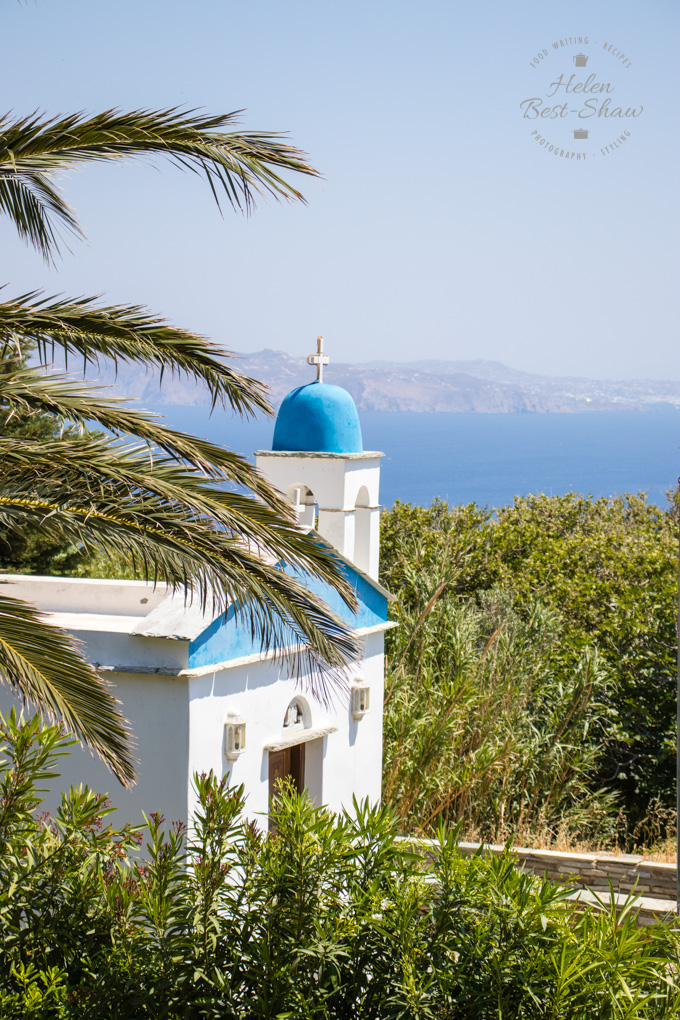 Part of the charm of Tinos is that you need to make more of an effort to travel to visit.  Without no airport you need to fly to the Greek mainland or another island and arrive by sea.   It is well worth the extra effort and time to take to see this charming, unspoilt island that is firmly off the tourist track.

Tinos is an important place of pilgrimage for Greek Orthodox, and is known for its windmills, the dovecotes and windmill, as well as marble crafts.

On arriving on Tinos you step off the ferry into Tinos Town, a busy town, and hub of activity on the island, as everyone needs to pass through as they arrive and depart. 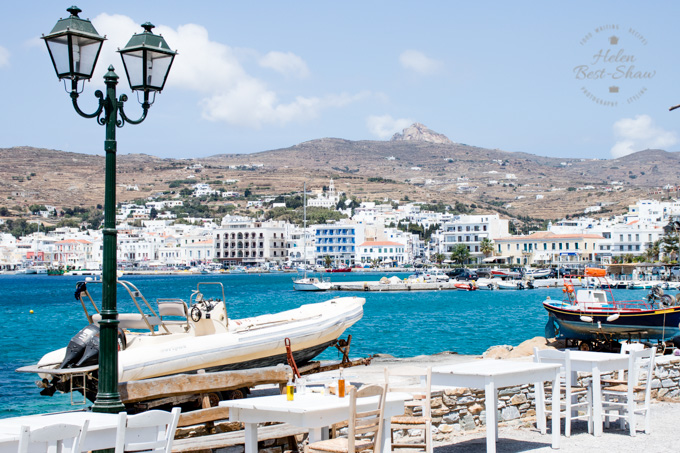 The waterfront curves around the harbour, filled with clear blue water with fleets of fishing, and leisure boats moored.   You can take a boat trip along the coast from here.

Stroll along the water’s edge stopping at one of the many cafes on the route for a drink and watch the world go by. 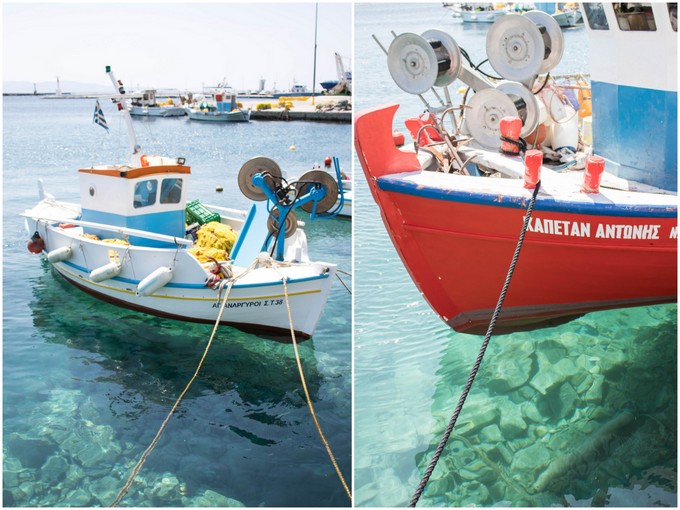 As you venture away from the sea into the town you can get lost in a maze of streets, with white washed houses with blue painted doors and shutters and jewel bright bougainvilleas. 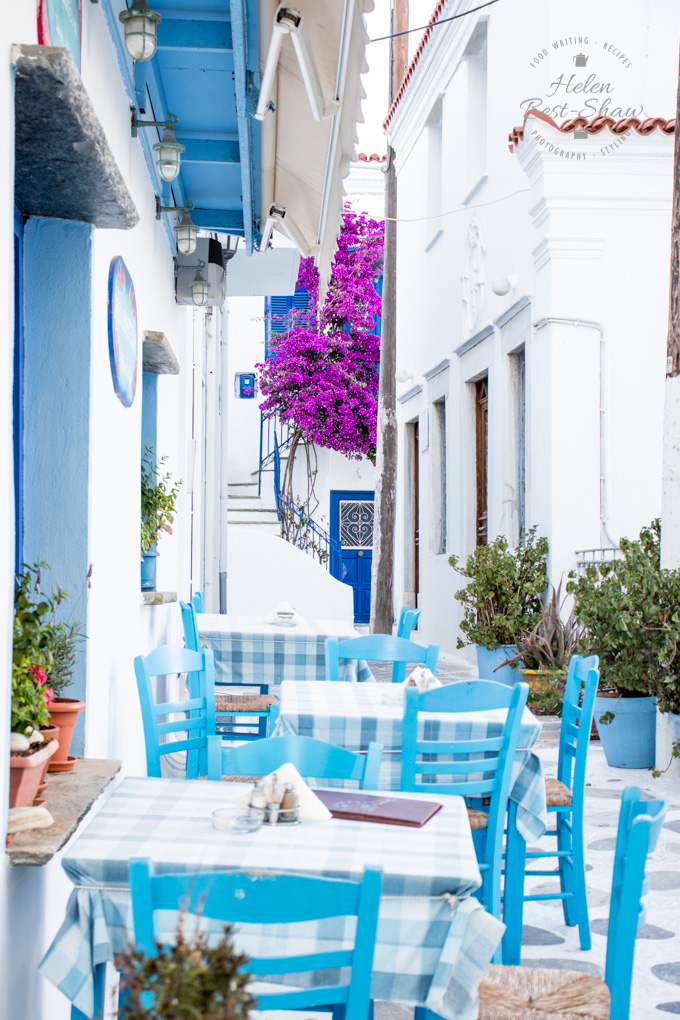 There are tavernas and restaurants on almost every corner with outside seating to watch the work go by from. 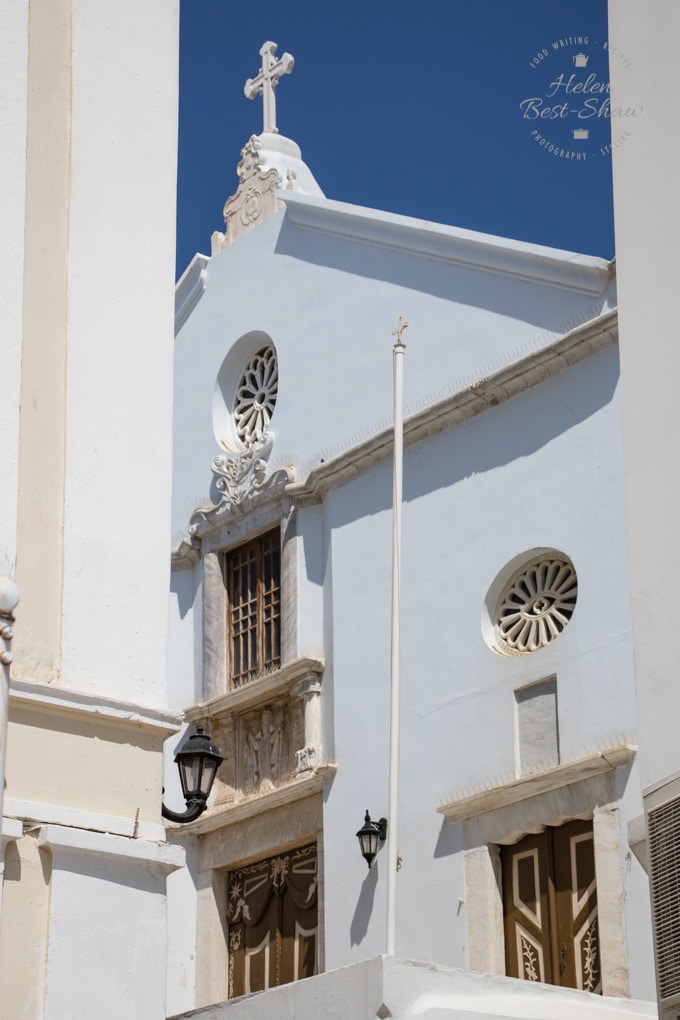 Tinos town is one of the best places to shop for gifts and souvenirs with dozens of small shops tucked away in the back streets, selling everything from confectionery to icons! 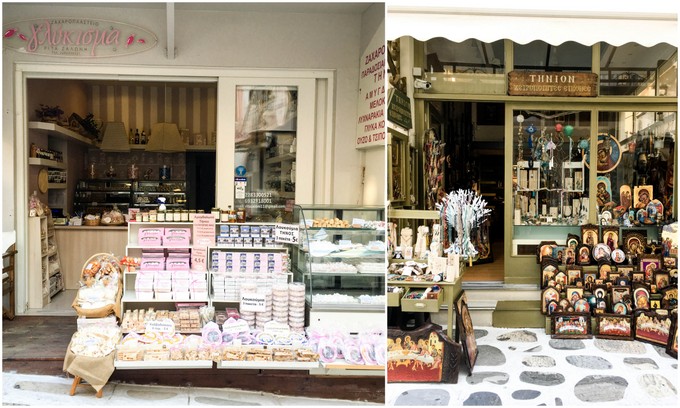 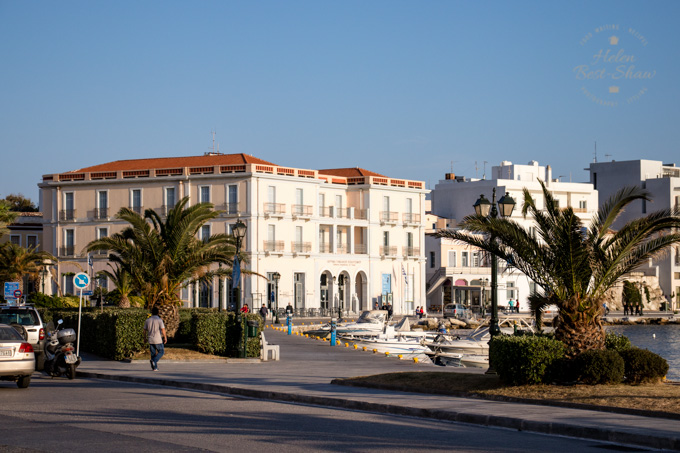 The Cultural Foundation of Tinos is in a grand building on the waterfront and the perfect place to spend a couple of hours out of the heat of the Mediterranean sun.

With space for temporary exhibitions much of the museum is dedicated to Yannoulis Chalepas an exceptionally talented sculptor and major figure in modern Greek art.  Yannoulis was born in Pyrgos (more on Pyrgos below), and studied in Athens and Munich.  His story is terribly sad as he suffered a nervous breakdown in 1871 and spent 15 years in Corfu Mental Hospital, before being discharged and returning to Tinos.   His mother blamed sculpture for causing his illness and stopped him working and destroyed much of his work.

After her death Chalepas starting working again, and his work can be see both in Tinos and in Pygros.  What we saw was exquisite and it is a tragedy he never had a full working life. 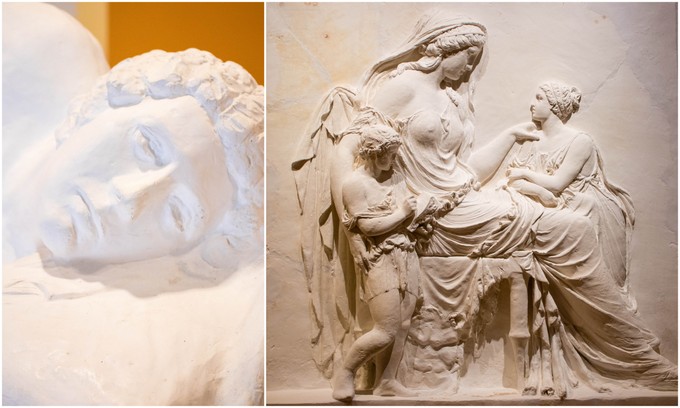 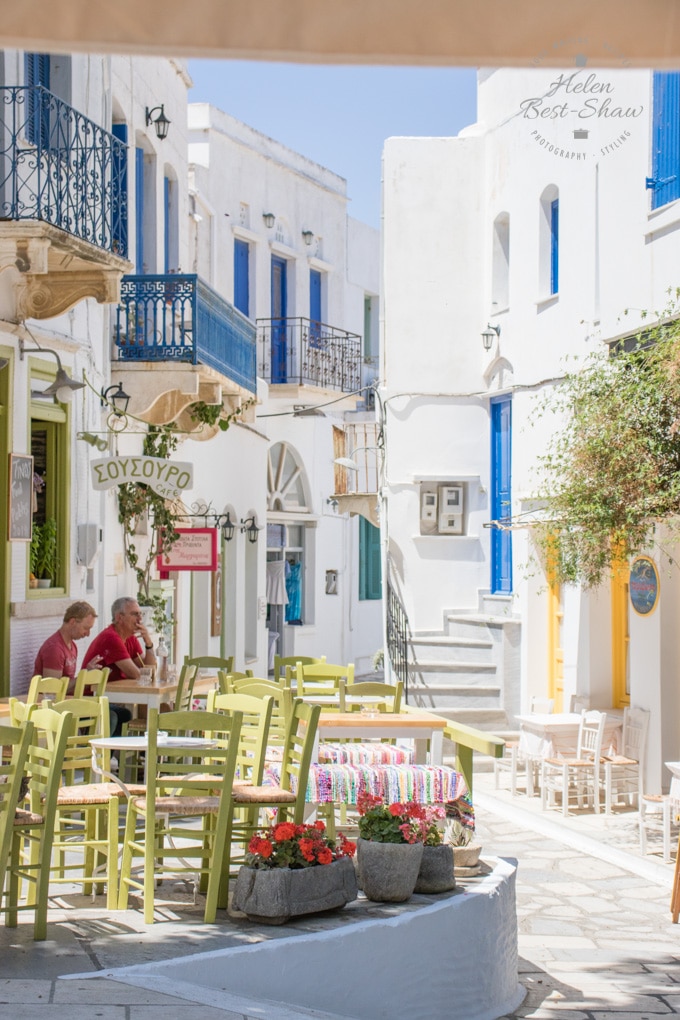 Pyrgos, the marble village, is probably Tinos’s prettiest villages and is a photographer and Instagrammer’s dream location. 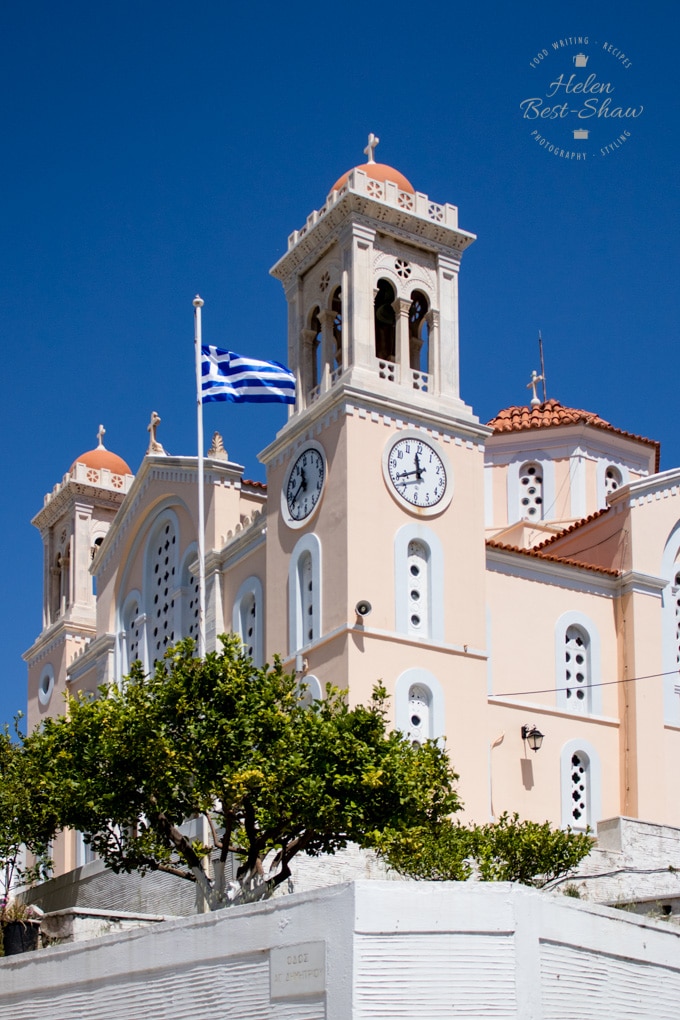 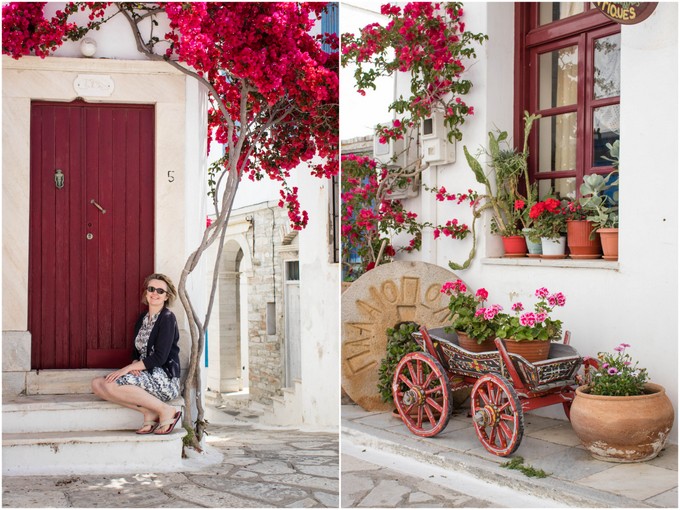 Our party got off the minibus and simultaneously cooed at just how pretty it was, with so many photo opportunities at every corner.   Take a spare camera battery and memory card! 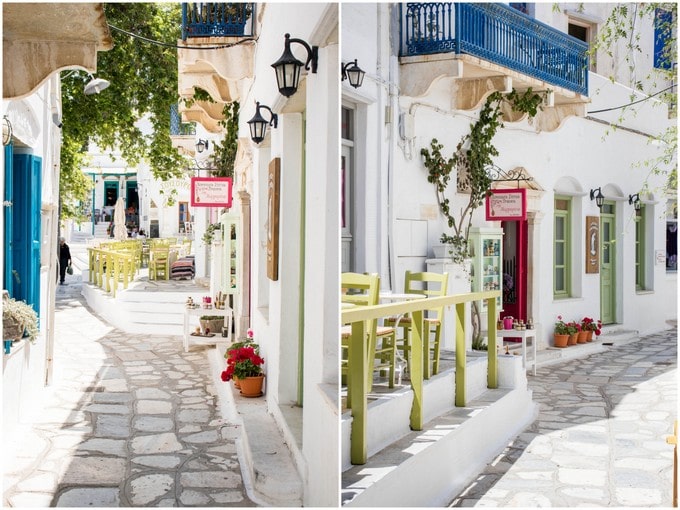 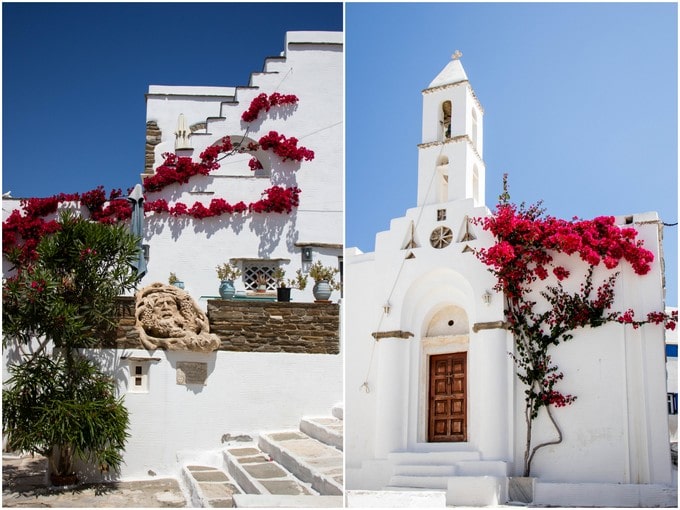 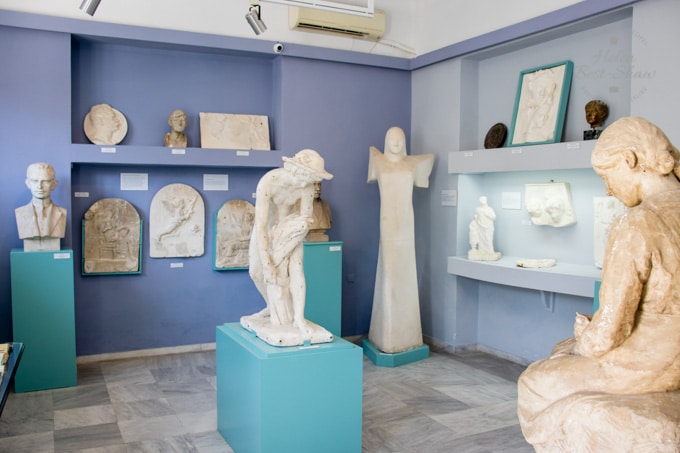 Away from the centre of Pyrgos at the edge of the village is the home of Yannoulis Chalepas and museum of his work.   The house is inauspicious and a real glimpse into island life over 100 years ago, and the museum contains more of his work, and explains some of the technicalities of, and how marble is carved and sculpted.

Also in Pyrgos is the museum of Marble Crafts where you can learn about all steps of the process from extracting the raw materials from the quarry to assembling the finished items.  There is  shop and cafe on site. 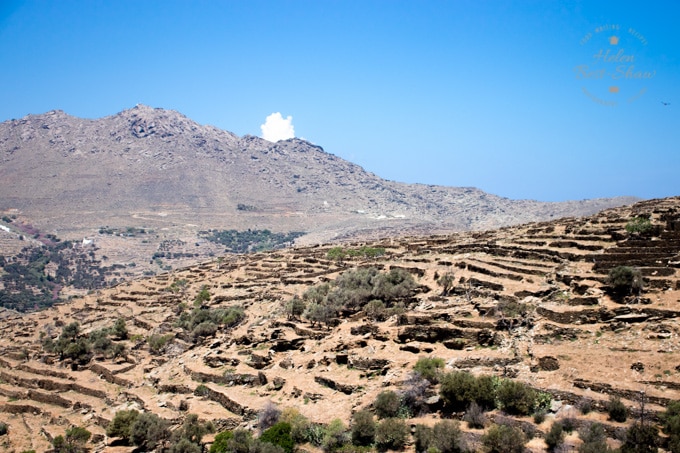 View from the terrace of the Museum of Marble Crafts, Tinos 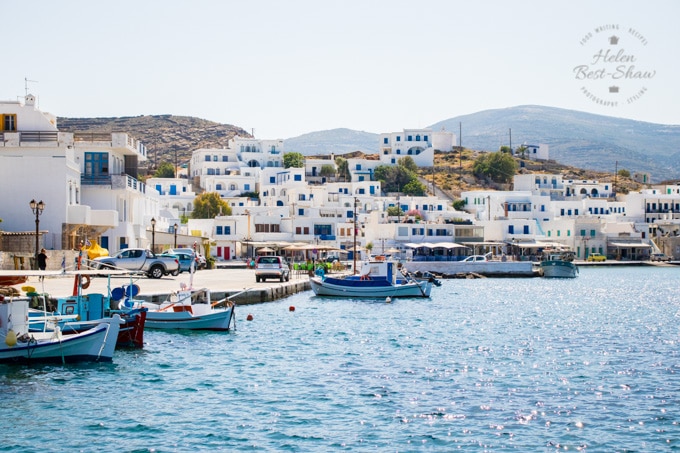 Close to Pyrgos is the pretty fishing port of Panormos, worth a visit and amble alongside the harbour. 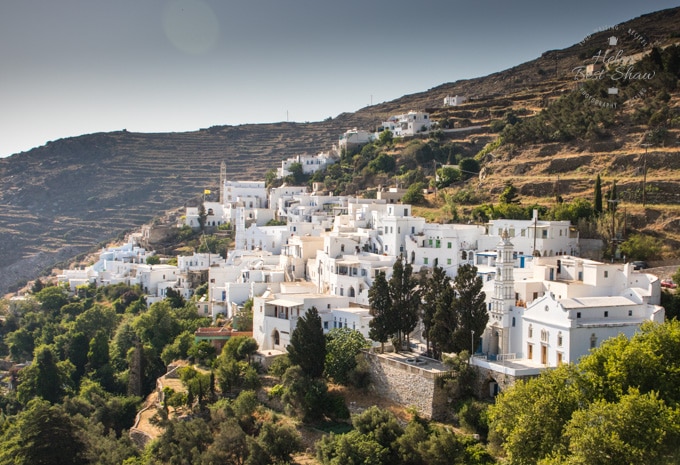 Kardiani is another absurdly pretty village which clings to the edge of the hillside, with its narrow streets with steep flights of stairs between the houses.   There are fantastic views from the terraces outside the main churches. 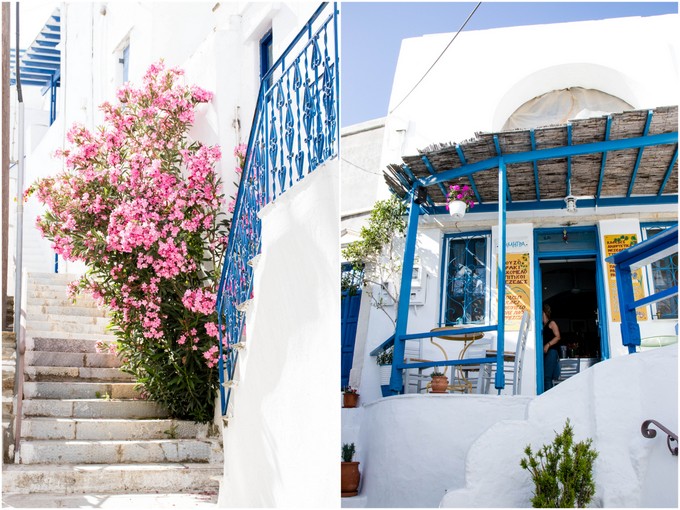 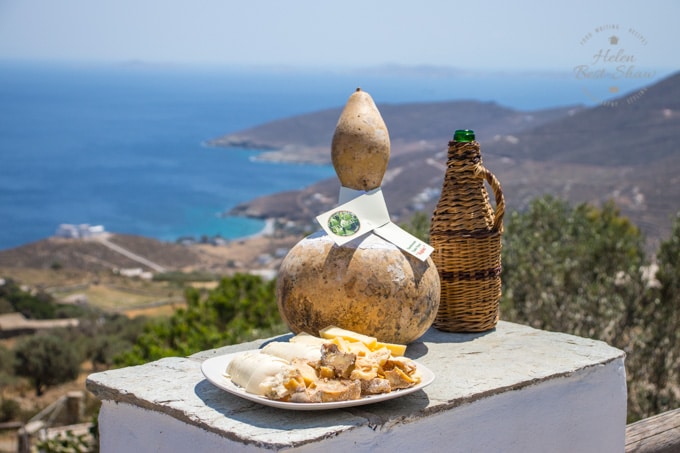 From cheese made in a gourd, heirloom grape varieties to specialist charcuterie Tinos is a food lover’s perfect destination; read more in my post about the foods of Tinos. 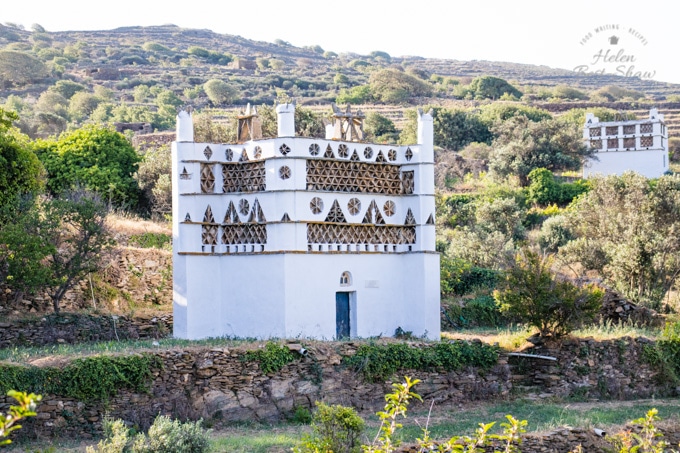 There are approximately 100 ornate dovecotes on Tinos, which can be seen all over the island.

The Venetians bought the tradition of dove breeding with them when they came to Tinos in 1207. 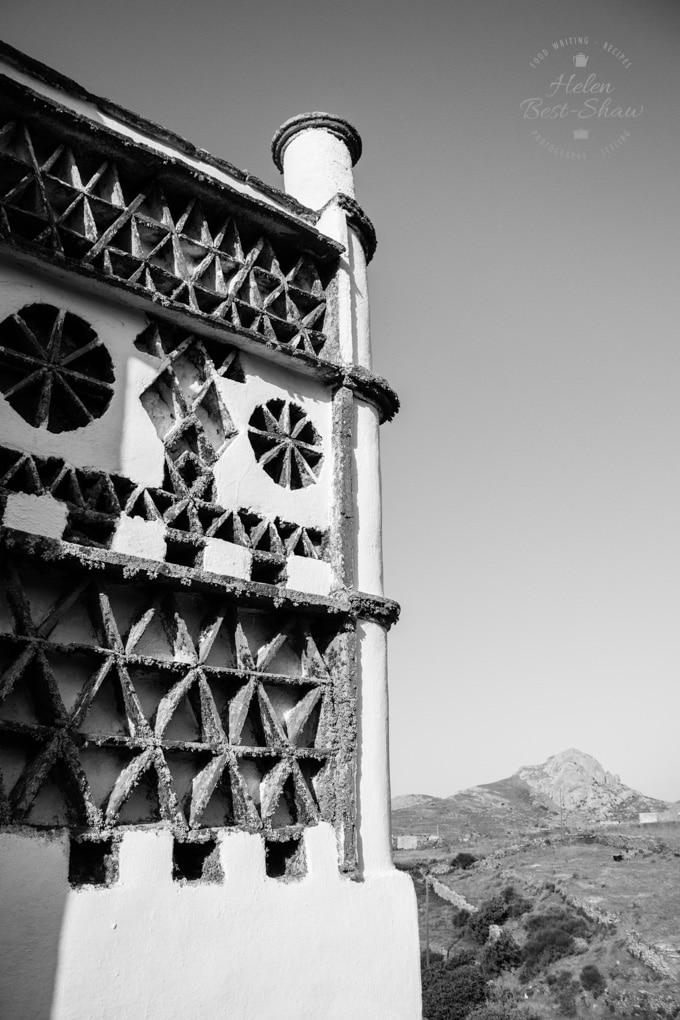 Venetian law stipulated that only the 69 feudal lords of the island were allowed to  breed doves (pigeons), but of course when the Venetians left in 1715, any family could build a cote and keep pigeons, and the increasingly ornate structures became a symbol of status and wealth. 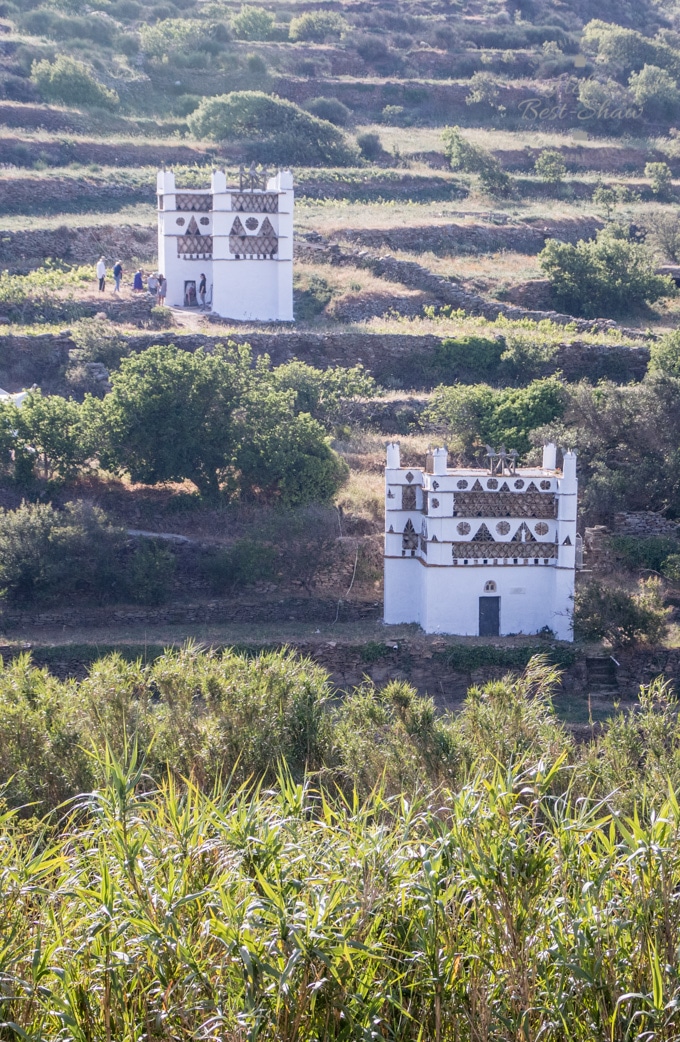 Today some cotes have fallen into disrepair but plenty still contain pigeons, and can easily be found and seen.

Walking and hiking in the countryside 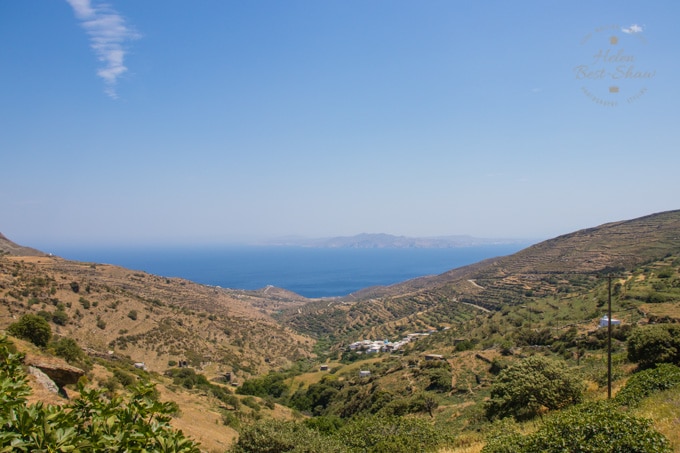 There are around 400km of trails across Tinos, and walking is a good way to see the island, with its vistas of the deep blue Aegean sea, windmills and hill top Monasteries, and of course more dove cotes! 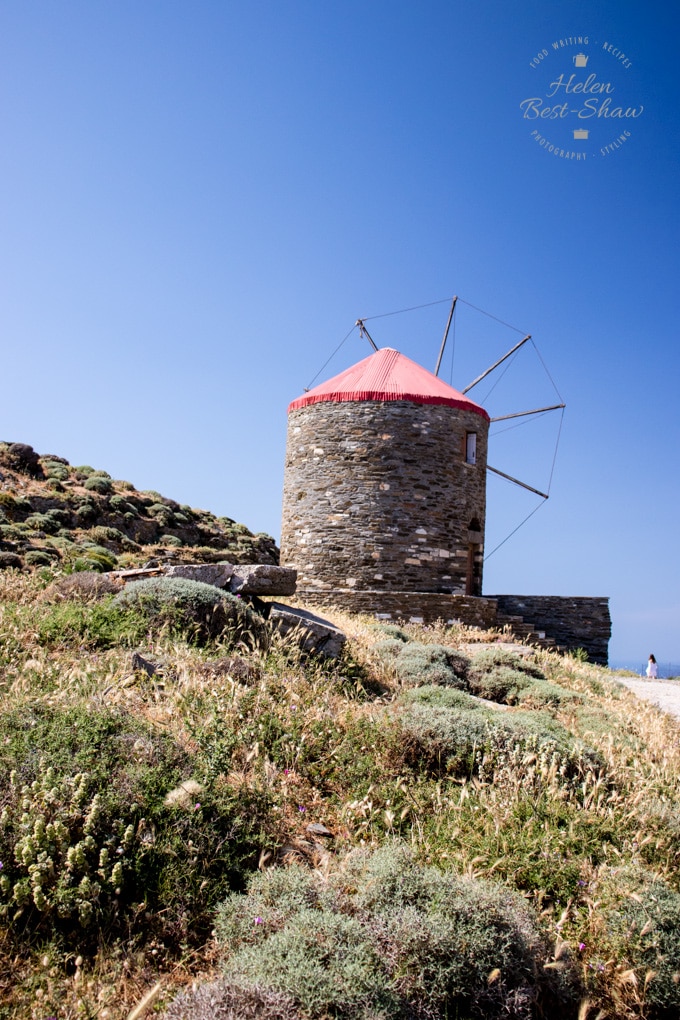 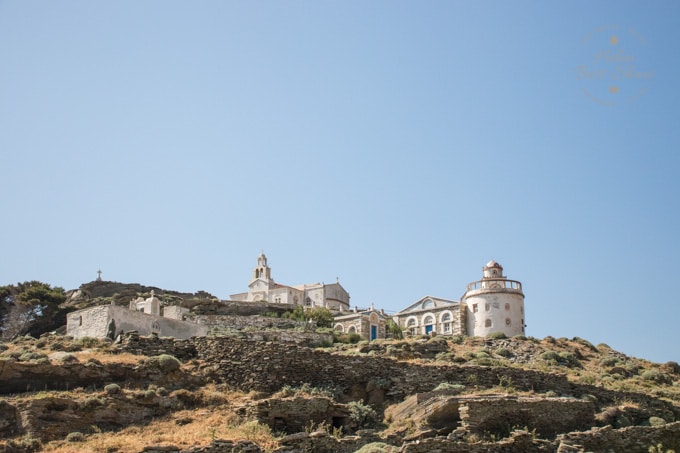 How to Get to Tinos

As Tinos does not have an airport you need to take one of the many ferries, either as a foot passenger, or in a car from the mainland or one of the islands with an airport.

We flew with Aegean Airlines, the national carrier, which flies from London to Athens direct three times a day all year round (then onwards to 30 Greek destinations), then took the ferry from Rafina to Tinos.

You can also fly to the nearby Mykonos and catch the ferry from there. 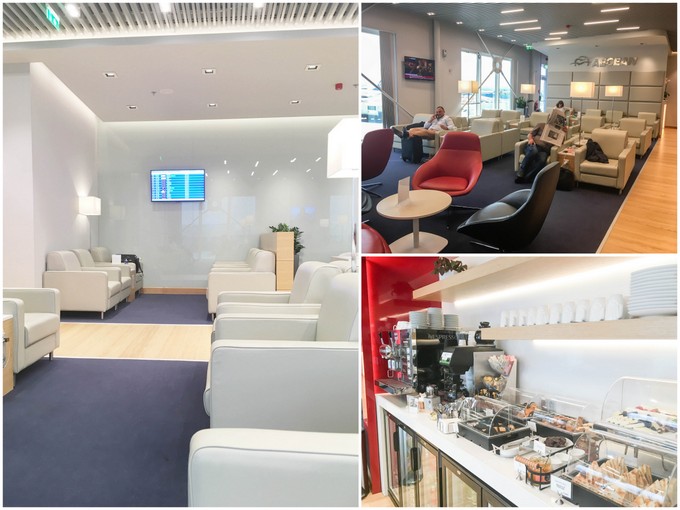 The comfortable and well appointed Aegean Business Lounge in Athens Airport – the perfect spot to escape from the crowds and enjoy snacks and a drink.

As Tinos is a relatively small island all the sights are within an easy drive.   We stayed at the Vega Apartments, built into the hillside a short 2km from Tinos Town.    Supremely comfortable and atmospheric with stunning views across the Aegean sea of the other islands. 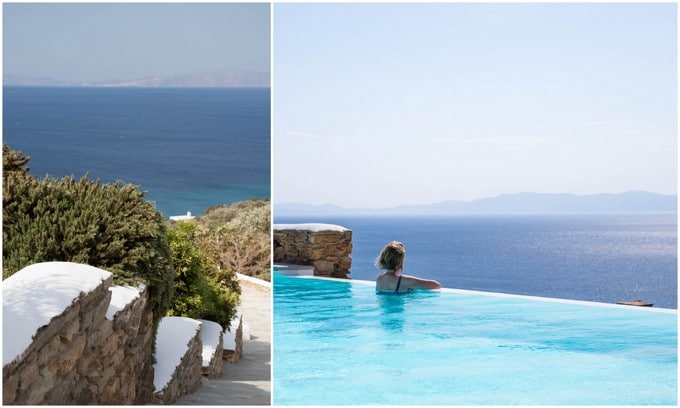 Things you need to know When Visiting Tinos

Tinos is a relaxed and friendly Mediterranean tourist destination, as there is no airport there are fewer tourists and the island feels very safe and laid back.

Tinos is an important place of Pilgrimage for many Greek Orthodox; if visiting churches you need to dress conservatively.

Because of its location Tinos is quite breezy: floaty skirts and dresses are slightly unsuitable as I discovered!

Fuss Free Flavours was the guest of Discover Greece for the trip to Tinos, all opinions are own.