You are here: Home / Other / The Best Coriander {Cilantro} Recipes

Whether you call it coriander or cilantro; do you love those herby citrussy flavours? I do! If you’re a fan like me, there’s so much you can do with it: here are fifty recipes featuring this endlessly adaptable and totally delicious herb. 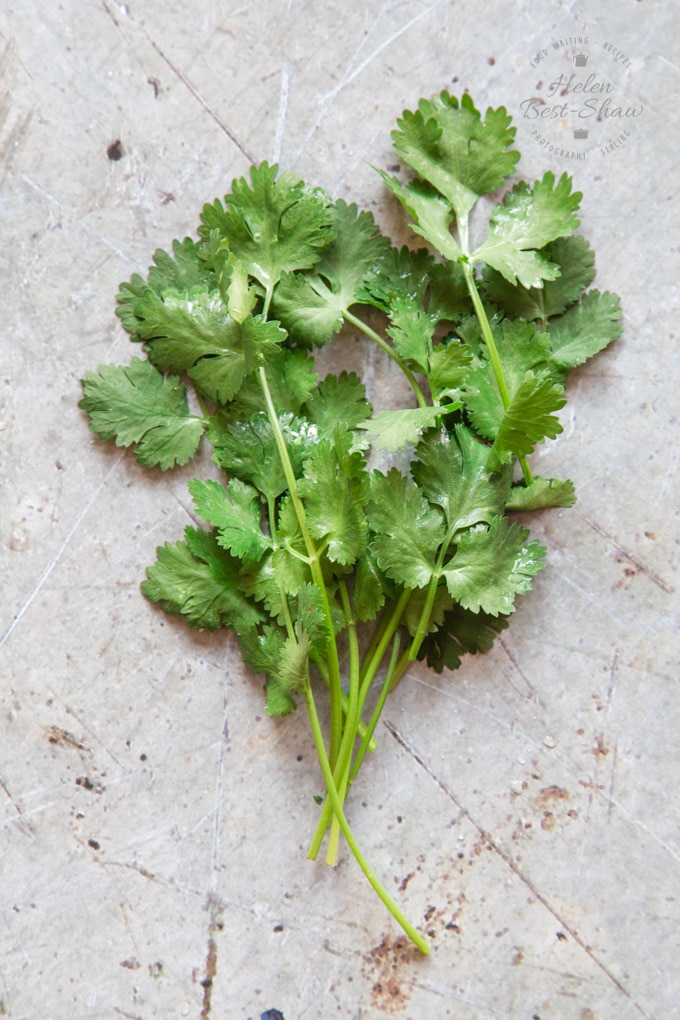 I’m talking here about the leafy herb, not coriander seeds. Commonly found in Asian cooking (it’s place of origin); it’s normally described as having a tart lemon/lime taste. In the UK, it’s called coriander, but in the US most people would call it cilantro – two words for the same thing.

Why the two names? This is normally ascribed to the strong Hispanic influences in the US, as that’s what it’s called in Spain, and from there migrated to Mexico and northwards to the US.

Just to confuse matters, some in the US call the seeds coriander. It’ll normally be clear what a recipe is referring to by context and amounts used, though.

Here in the UK we call the green leafy herb coriander, and in the US it’s cilantro.

Why do some people hate cilantro / coriander?

Because, to them it tastes of soap. Really!

It’s genetic – something between 4 and 14 percent of the population have a gene that means they smell, and therefore taste, the chemicals in coriander that are the same as the ones in soap.

How do I store cilantro / coriander?

Cut coriander is notorious for wilting within a second of taking it out of its packet.

Open the packet at the last moment, use what you need and then stand the stalks up in a glass of water in the fridge.

Can I freeze coriander?

Yes! Coriander will keep all its flavour once frozen, but will be pretty mushy once defrosted, so is best used when appearance doesn’t matter.

Freeze in a sealed bag or box and snip off you need from frozen.

Why do my pots of coriander from the supermarket wilt?

Usually because they need a good watering! Fill the kitchen sink to 2″ deep with water and stand the pot in it.

Also thin the plants out – each pot usually contains many small seedlings that have been forced to grow fast. If you have larger pots and some compost you can also repot it.

Jazz up your dressings, dips and sauces with one of these recipes using coriander. Don’t restrict the dressings to salads – not that they’re not a great change from yet another vinaigrette – but try them on grilled meat or stirred into pasta rather than pesto. Vibrant colours and bursting with flavour, a coriander based dressing, dip or sauce both looks appetizing and tastes great!

Green Goddess Dressing – ideal for all those half packets of herbs, including coriander

Making soup from scratch might take a few more minutes than popping open a can, but the results are so worth it. From the old carrot and coriander favourte to something more exotic like Portuguese bread and garlic with coriander and fresh shrimp, there’s a delicious coriander-flavoured soup here for every level of complication you could want.

Carrot and coriander soup – surely the classic soup with coriander?

Three salad recipes that let you enjoy fresh coriander. Hearty grain, pulse or corn based salads that can be a whole meal in their own right.

Mexican Street Corn Salad – a vegan version of this classic

Chickpea salad with coriander dressing – keep a batch in the fridge!

Here are some great meals that are not just for vegetarians, but are suitable for all. Enjoy them on a meat-free Monday (or on any other day of the week, frankly. How about discovering the delights of a meat reducing diet!); fresh tasting coriander really lifts these dishes.

While I do follow a meat-reducing diet, so I’m not vegetarian so these recipes are most welcome. Here are a whole range of recipes for chicken and meat with influences from around the world.

Beef Mini Roast with a Chutney and Coriander Glaze – a mini roast is perfect for two, and quick to cook

Beef Koftas with Sag Aloo – make your own Indian favourite

BBQ chicken, bacon and coriander pizza – ideal for using up bits and bobs

Chicken thighs and potatoes with coriander – a fantastic one pot dish

And now fish and seafood recipes, from BBQ-perfect shrimp to a more sophisticated tuna cakes suitable for dinner.

Thai Mussels – a South East Asian twist on the French classic, pictured above

Finally, some more rice and other grain based recipes that feature coriander.

Charred Lime Gin & Tonic with Fresh Cilantro  – a tasty riff on the much loved mixed drink.

Fresh Pineapple with Citrus Herb Glaze – finally, a coriander based garnish to an extra flavours to fresh pineapple.

This post is dedicated to the memory of fellow blogger Isabella, her blog Coriander Queen named after her love of coriander, who died of cancer in 2017.    I’d know she had been ill for sometime, and she had posted about her progress to her blogging friends on Facebook, we were thrilled when she had had good news, and married the love of her life.   Then there was the silence, the tailing off of blog posts, of twitter and Instagram.   Then the dreadful news that the cancer had come back and she had lost her fight.

I remember Isabella by her optimism, her kindness and lovely cheerful profile photo with her beautiful smile looking warm and cosy in a woolly hat and fluffy scarf.

I hope you approve of this collection of coriander recipes in your memory Isabella.