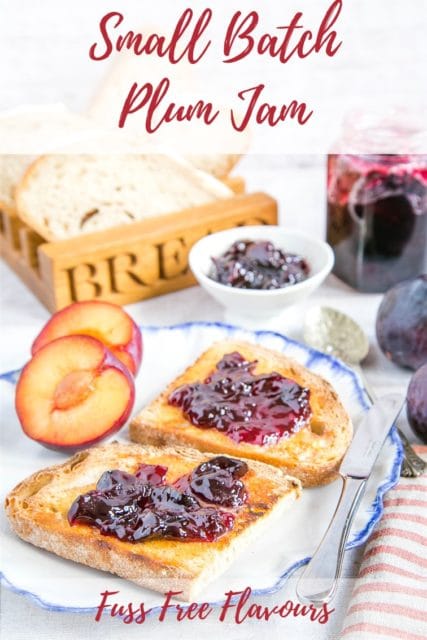 My delicious home-made plum jam is perfect spread on toast, crumpets or tea cakes. This quick and simple small-batch recipe produces a couple of delicious pots. 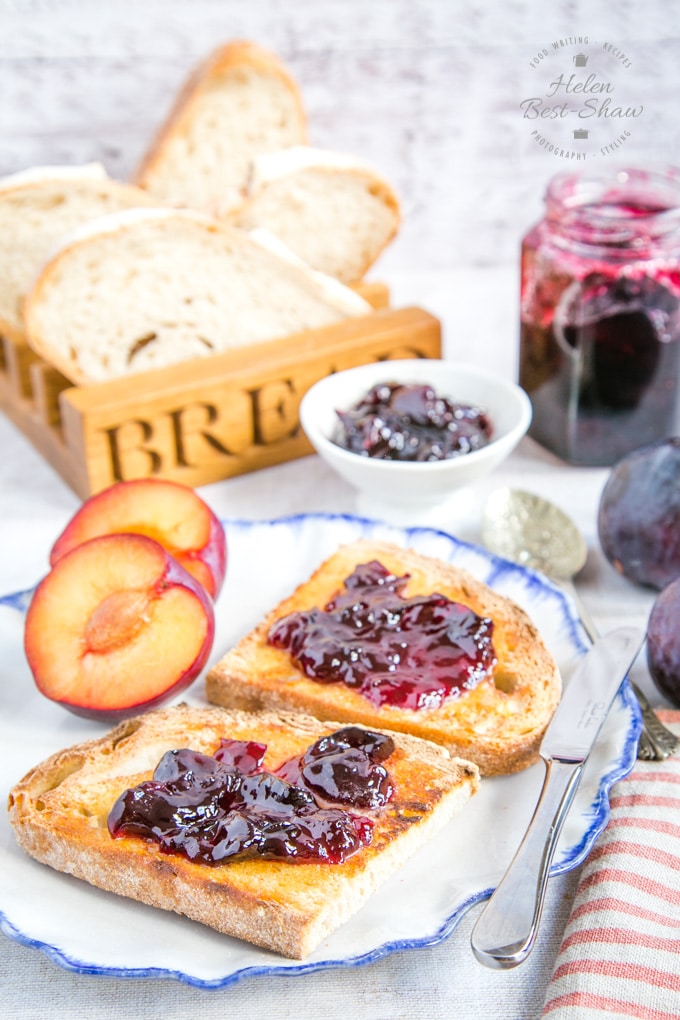 This plum jam recipe will convert you to jam making. It’s very simple to make, and I find that it takes only a few minutes at the stove, thanks to my favourite small batch method.

Fresh ripe plums are one of the great British soft fruits. They have a short season, so I enjoy them while I can and capture that flavour for the rest of the year by making jam.

Jam will keep safely for several years but it does lose its freshness and flavour over time. I don’t know about you, but the back of my cupboard used to hold far too many jars of ancient too-solid jams. So now I avoid this by making small batches, and enjoying the jam at its best. If I run out before the next season, I’ll enjoy something else instead.

We have used a red plum with a golden flesh for the jam, you can, of course use any type of plum.

No. This plum jam recipe doesn’t use added pectin. The natural pectin in the fruit and the lemon juice sets it very well.

Jam or Conserve: What’s the Difference ?

When making jam, the fruit is sliced and then cooked before the sugar is added. This is necessary for fruit that need more cooking time.

For a conserve, whole raw fruit is left to stand in sugar to draw out the juice. The resulting mixture is then heated to a setting point. By doing this, you minimize the cooking time and keep the fresh flavours of the fruit. You also keep the shape of the fruit pieces. This plum jam recipe uses the conserve method. 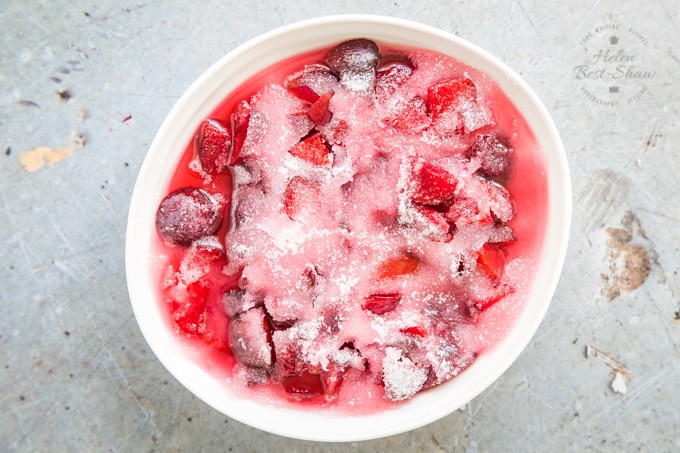 Step one – Cut the plums in half, remove the stones and cut off any bruises.  Cut each half into abut 8 pieces.  Put all the fruit in a bowl, and add the sugar.

If you have a glut of plums to use, but no time to make jam, you can freeze them at this point. Just make a note of the weight of plums and sugar used. 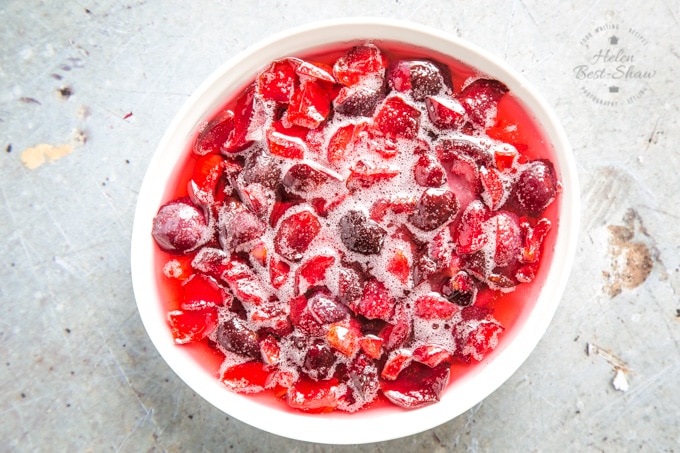 Step two – Cover the bowl and leave overnight to let the sugar draw the juice out of the fruit.

Step three – Sterilize clean jam jars and lids by placing them on a baking tray in the oven at 120°C/250°F/GM1. Transfer the plum and sugar mixture to a large saucepan or preserving pan, and simmer gently until all the sugar is dissolved. Add the lemon juice.

Step four – Once the sugar has dissolved, heat the mixture quickly to a rolling boil. Then start testing to see if will set. (See below for more information on this.)

Finally, let the plum jam cool for about ten minutes before you spoon it into the jars – this allows it to cool and thicken and will help stop all the pieces of fruit rising to the top, you want your fruit evenly distributed throughout the jam.

I ladle my jam into a toughened glass jug and pour into the jars through a jam funnel, which helps to stops any stray drips of jam.

Seal the lids while the jam is still hot. As it cools, you’ll hear the lids pop as the vacuum forms. It’s always a satisfying noise after a day with the preserving pan. Clean up any drips, stick on a label and you’re all done – delicious, easy plum jam. 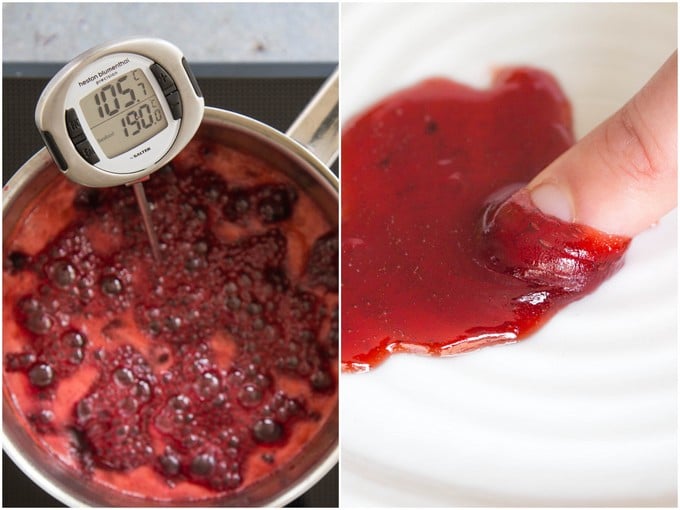 With time you will be able to gauge setting point from the appearance, and sound, of the simmering jam.

If you are in doubt pot the jam – it is easier to remedy a soft set jam than an overset one.

How to check your jars have sealed

It is crucial to check your jars have sealed – you would have heard the little pops as the lid of each one was sucked in as it cooled.

Leave the jars out for 24 hours, and press the centre of each one. If the centre of the lid stays put it is sealed, and the jar can by put away.

If the centre of the lid pops up when released, it hasn’t sealed properly.   If you have several unsealed jars you can open them all and re boil the jam, or if just one put it in the fridge and eat it immediately.

Making jams by ratio makes the recipes easy to scale up and down. 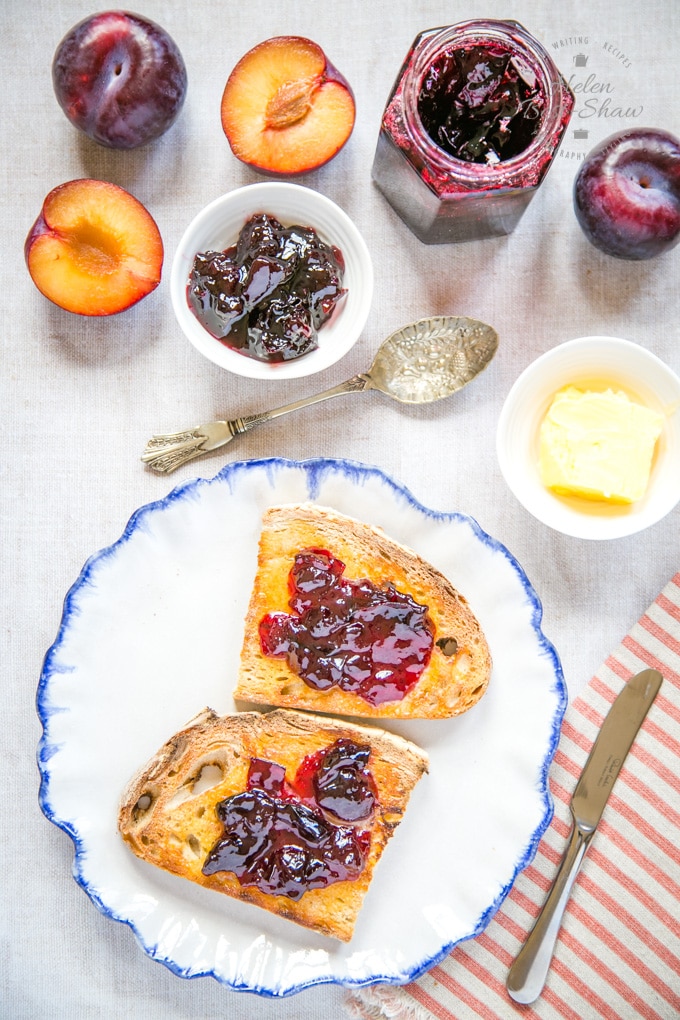 One of the reasons we love small batch preserving is that you can experiment with the recipe.

How long does plum jam last?

If you have made the jam properly with quality fruit, and the lid has sealed properly, your jam should last for years stored in a cool dark cupboard. It will thicken and darken over time.

Once opened I store jam in the fridge, this is largely due to a lack of cupboard space, and that we have several pots on the go at once.  Homemade jam will be fine in a cupboard for 4 weeks after opening.

If you enjoyed this plum jam recipe, why not try more small-batch preserving? Hold on to summer with my Nectarine Jam, or capture the flavours of early autumn with my Easy Pear and Blackberry Jam.

For more plum recipes, try Spiced Pears and Plums in Port or treat yourself to this easy and delicious Golden Syrup and Plum Cake.

If you try this Easy Plum Jam – Small Batch please tag #FussFreeFlavours on Instagram or Twitter. It is amazing for me when for me when you make one of my recipes and I really do love to see them. You can also share it on my Facebook page. Please pin this recipe to Pinterest too! Thanks for reading Fuss Free Flavours!
4.91 from 10 votes 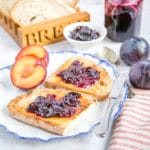 This easy plum jam recipe uses the conserve method to preserve the fresh flavour of the fruit.