This banana & mincemeat loaf cake has no added fat, and is topped with a cinnamon & cranberry cream cheese frosting and is delicious alternative to the traditional Christmas cake 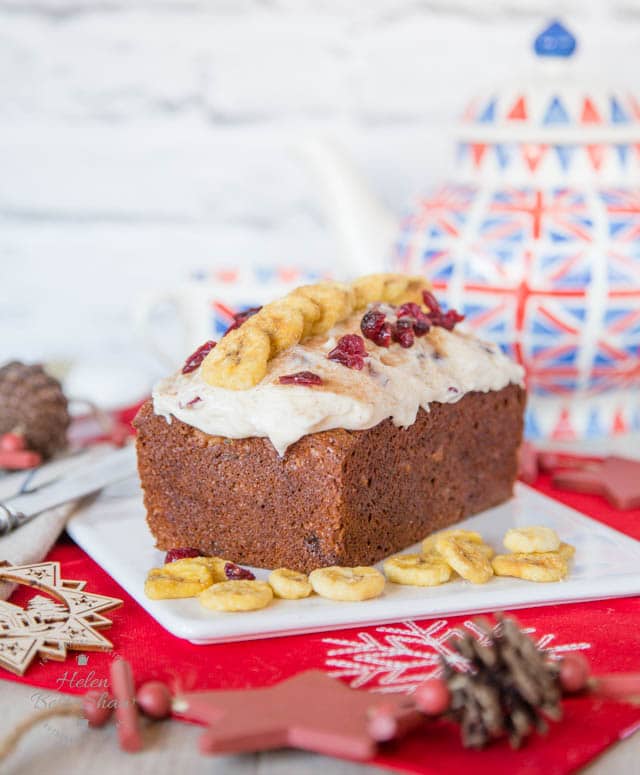 I was in France last weekend and completely missed Stir Up Sunday when people traditionally make their Christmas cakes and puddings.   I do wonder how many people are organised enough to remember to make their cakes a month before Christmas, which brings the two-fold benefit that a matured cake or pudding simply tastes better, and getting any Christmas preparations out of the way before the start of December has to be a good thing. 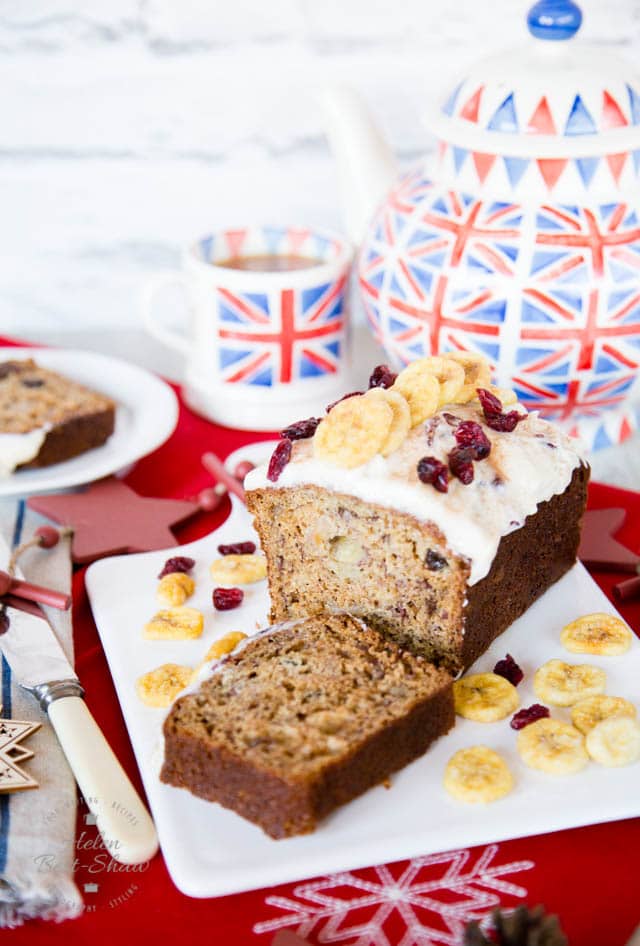 This loaf cake is a twist on the classic banana bread, to which I added a dollop of mincemeat and a packet of Emily Banana Chips (more on them below) for that extra banana flavour.    It is simply spread with a cinnamon and cranberry cream cheese frosted and decorated with some more banana chips and cranberries.   Despite having no added fat this loaf is incredibly moist and soft.  If truth be told the no added fat was an accident – Ed was remaking my original recipe to test it and forgot to add the melted butter – I think it is just as good as the original and with no butter in the cake you can add some extra frosting?

One of the things that I really love about loaf cakes is that they are all about the flavour, and not about the decoration, for more loaf cake inspiration you might like my sticky marmalade loaf cake or my Frozen Yogurt Cakes Two Ways! 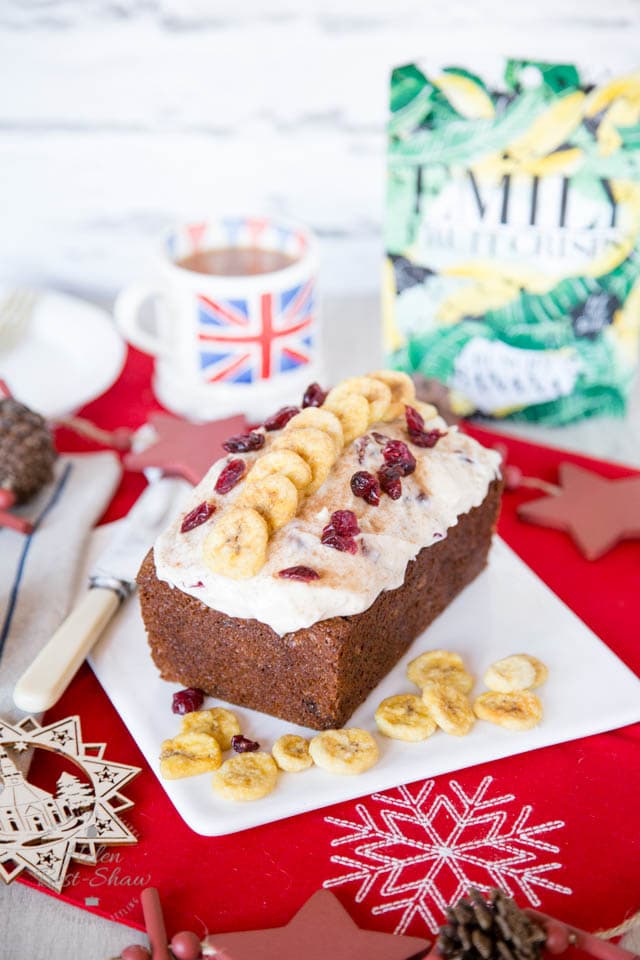 If you try this Mincemeat & Banana Loaf Cake please tag #FussFreeFlavours on Instagram or Twitter. It is amazing for me when for me when you make one of my recipes and I really do love to see them. You can also share it on my Facebook page. Please pin this recipe to Pinterest too! Thanks for reading Fuss Free Flavours!
4.89 from 17 votes 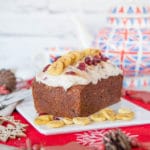 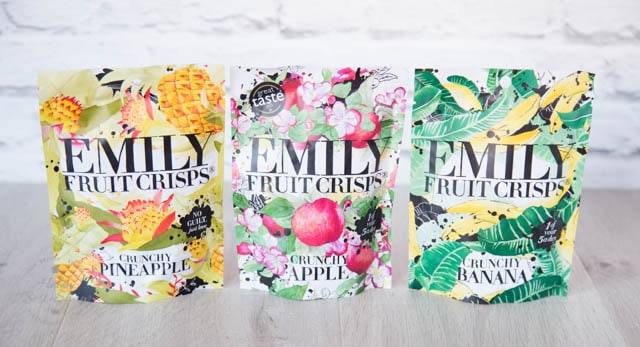 The banana chips I used from Emily Fruit Crisps are unlike any other, rather than being chewy dried fruit, they are genuine crisps, light, airy and oh-so-crunchy – as well as being packed with flavour.  They are made with a specialised pressure cooking technique which inhibits the absorption of oil which means that the crisps are also really rather good for you (the apple and banana ones count as one of your 5 a day).    The crisps really are something new and different and make a fantastic snack when the munchies strike in the middle of the afternoon, or to throw into my bag for a snack on a journey.

The fact they they have the most exquisite packaging is the icing on the cake with these crisps.    Get them for £1.49 a bag from Waitrose, Ocado, Wholefoods, Selfridges and Holland & Barratt. 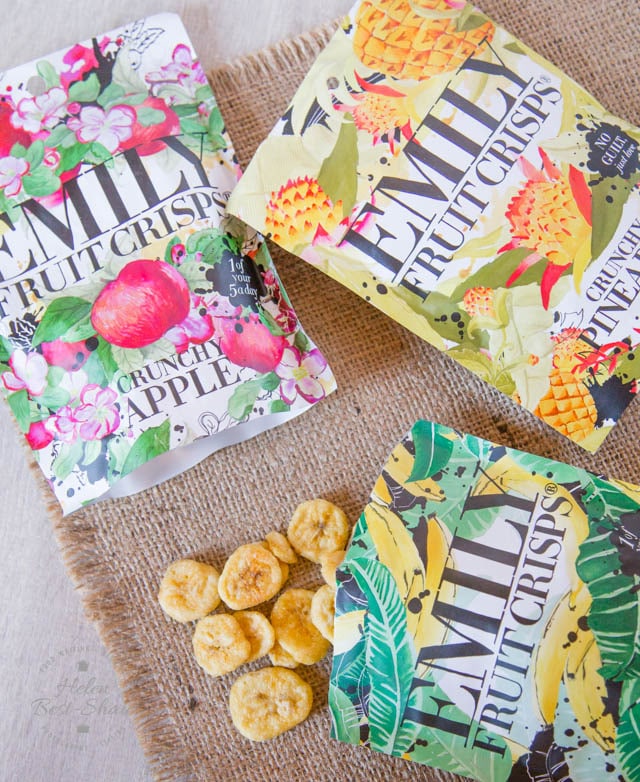 For more ideas using Emily Crisps why not try 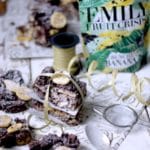 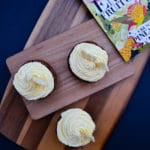 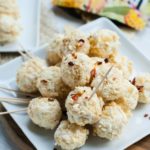 Recipe for Mincemeat & Banana Loaf Cake commissioned by Emily Fruit Crisps.   All opinions our own.