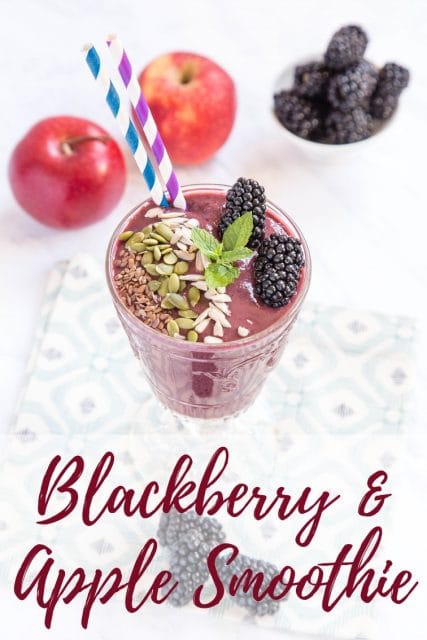 This blackberry and apple green smoothie is a great way to start the day, and has an added extra helping of spinach for that healthy boost. Vegetarian, Vegan, Paleo Friendly.  Freeze into ice lolly moulds for a refreshing and healthy popsicle. 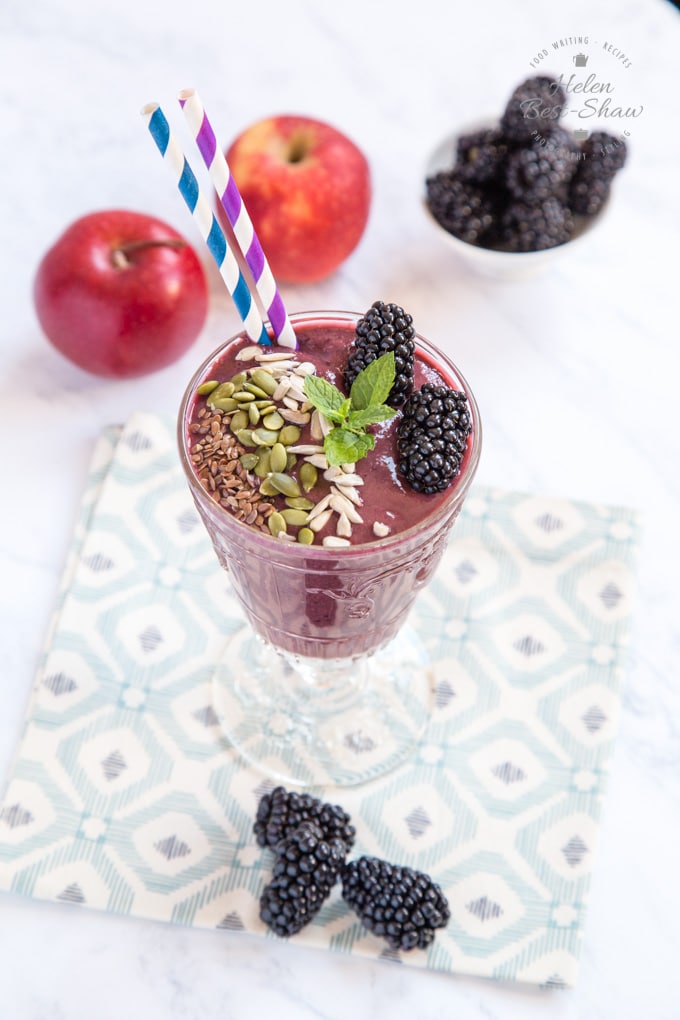 Do you think of blackberries as an autumn fruit? So do I, but in fact farmed blackberries are in season in the UK from May through to November. Despite its name the blackberry is not actually a true berry, but rather an aggregate fruit made up of a number of small drupelets. 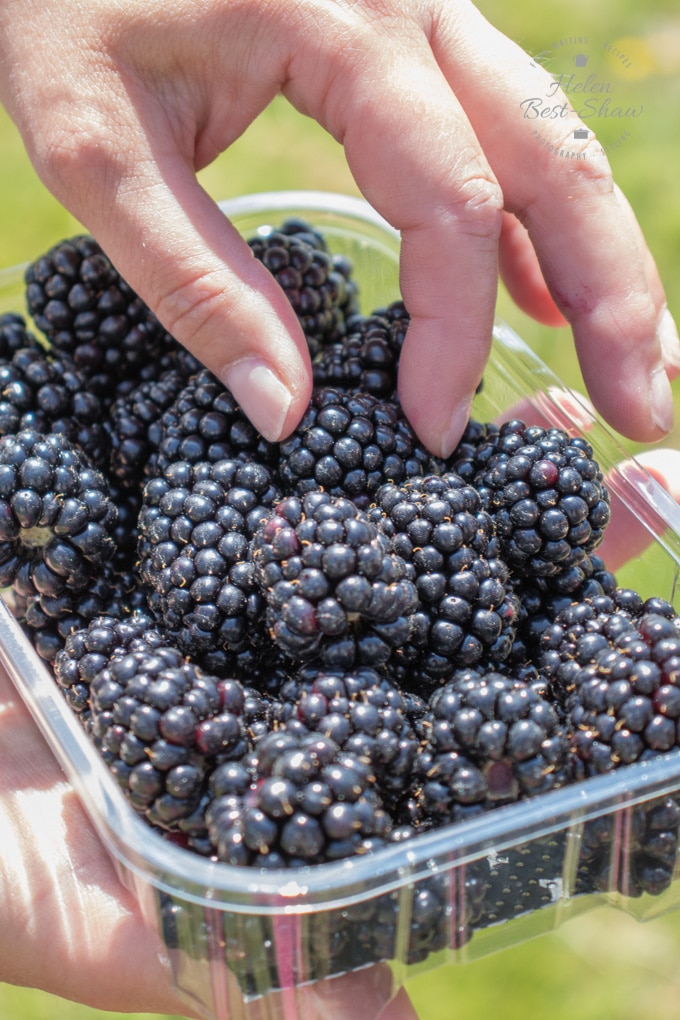 Driscolls Victoria sweet blackberries are completely unlike the smaller versions of the fruit found in many hedgerows. Large, sweet and with a rounded flavour, they have a rich, almost wine-like flavour.

They’re grow on farms throughout the UK; the young plants are kept in cold storage, then planted in greenhouses or in the field, at staggered dates to ensure a constant supply. 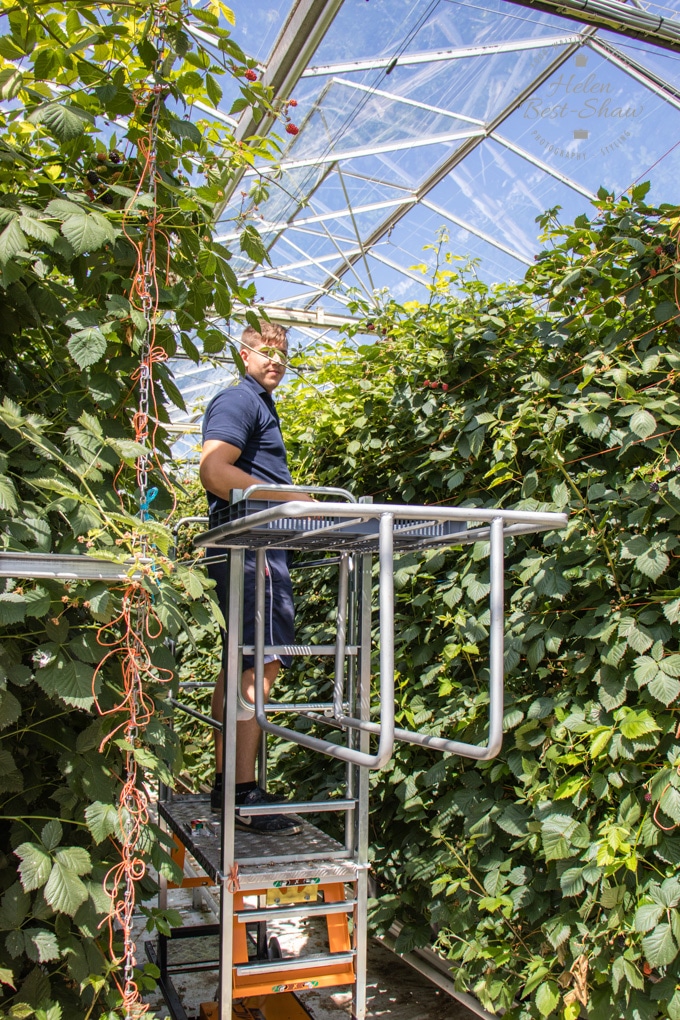 Each fruit is handpicked (as you can see above) to ensure peak ripeness and flavour. The farmers are dedicated to making sure the fruit passes Driscoll’s exacting quality control standards.  This type of blackberry is thornless, so picking is not the prickly experience you will know from when foraging in the hedgerow.

In the greenhouse the plants are around 3 meters tall and the fruit from the top of them is harvested from these rather whizzy electric carts that run on rails between the rows of blackberries.    Read more about the farm at the end of the post. 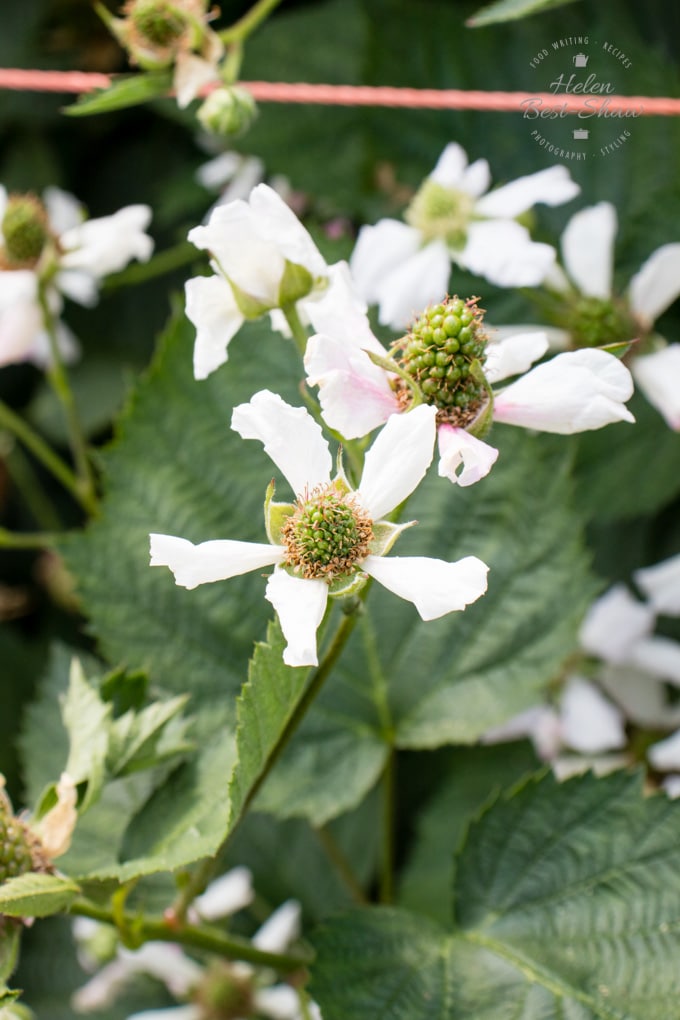 But back to the recipe – blackberry and apple is a classic combination; more usually used in pies and crumbles, which works very well in a glass. I added a pinch of spice to hint at a classic crumble, you barely know it is there, but it adds another subtle layer of flavour which you would miss if it were absent. 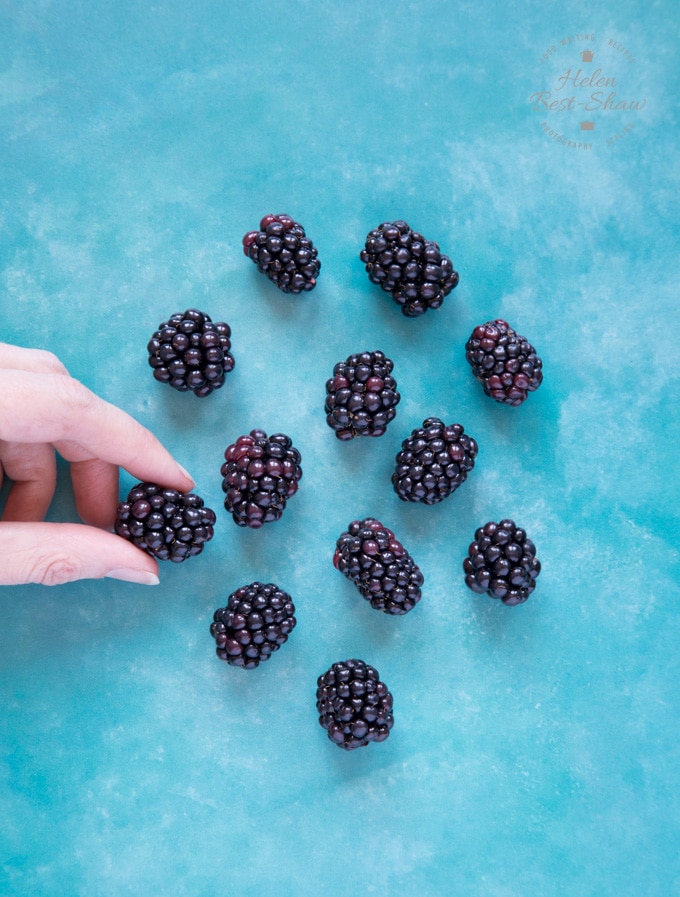 You really cannot taste the spinach in this at all, and it is a bonus way to eat some extra vegetables first thing in the morning. 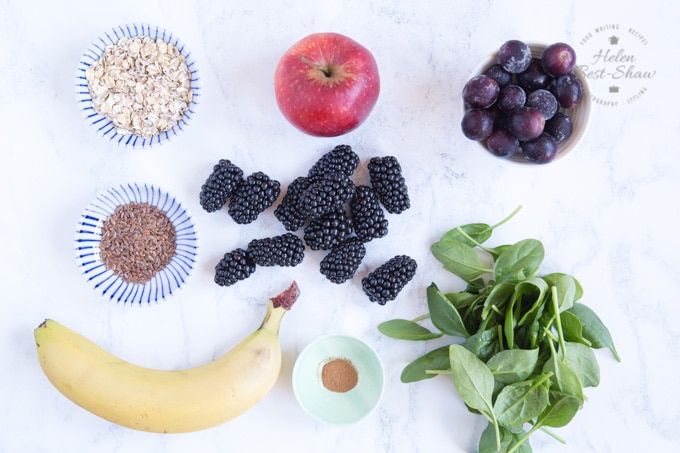 I use a power blender for my smoothies with about half the fruit being frozen. If your blender is not as high powered then chill your ingredients overnight. 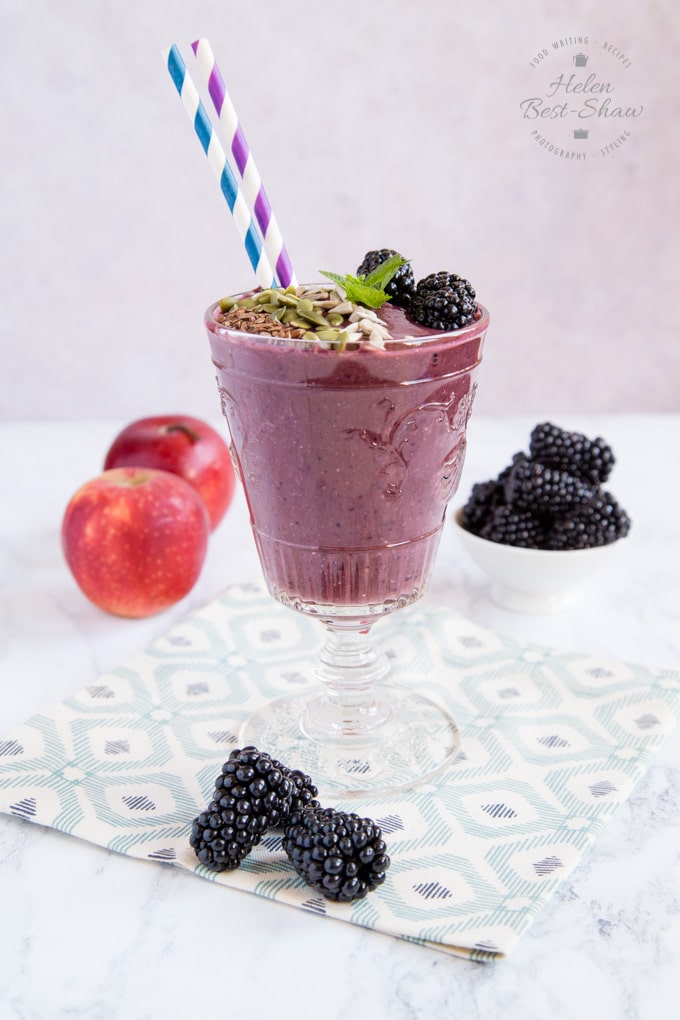 If you try this Blackberry & Apple Green Smoothie {Vegan, Paleo} please tag #FussFreeFlavours on Instagram or Twitter. It is amazing for me when for me when you make one of my recipes and I really do love to see them. You can also share it on my Facebook page. Please pin this recipe to Pinterest too! Thanks for reading Fuss Free Flavours!
4.78 from 18 votes 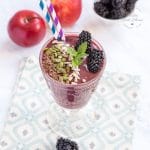 Blackberry and apple pie green smoothie in a glass, with an added (and undetectable) portion of green veg.  Vegan and Paleo Friendly.
Freeze into ice lolly moulds for a refreshing and healthy popsicle. 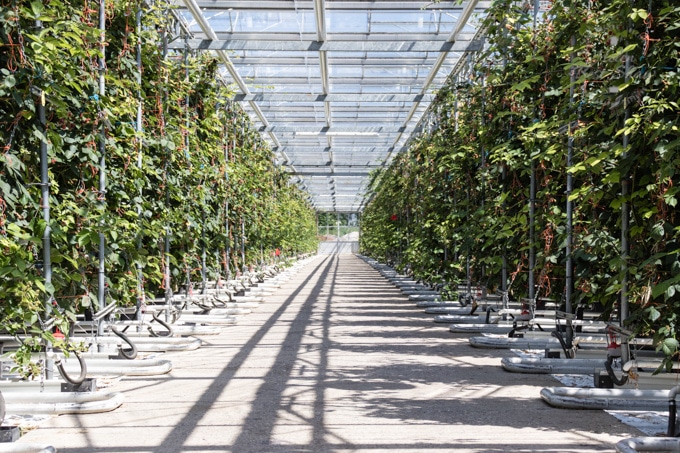 The vast greenhouse that the blackberries grow in. 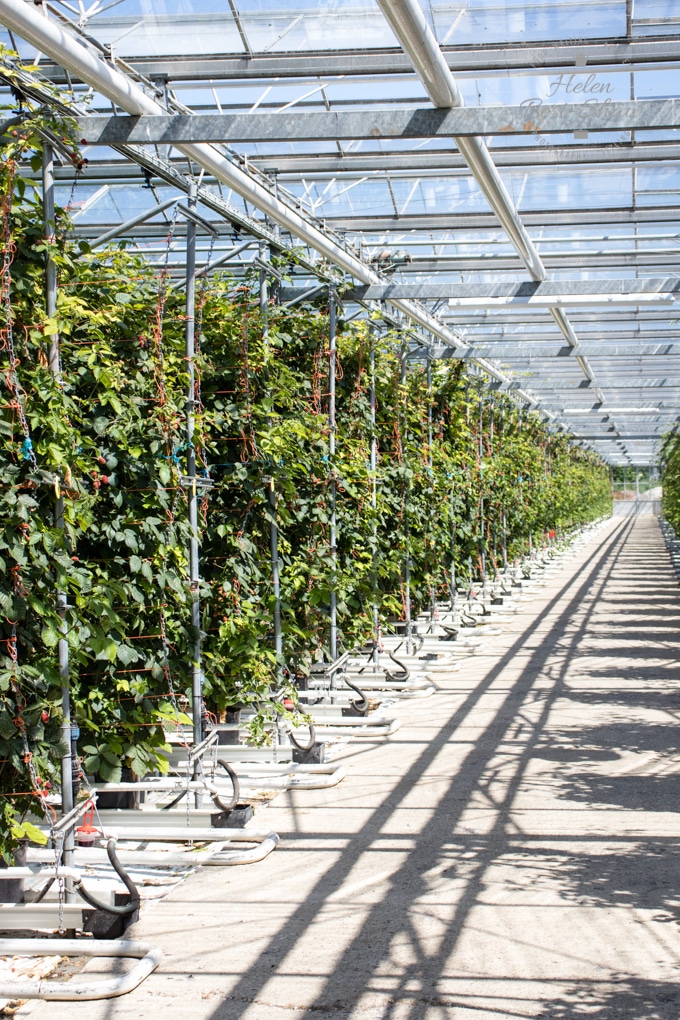 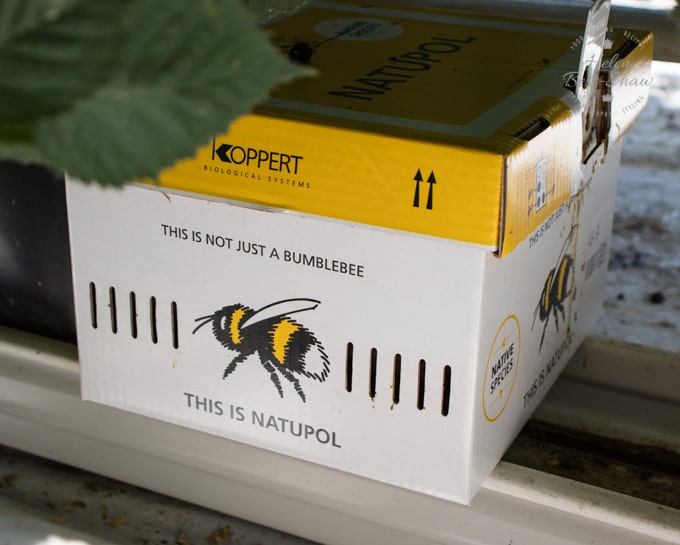 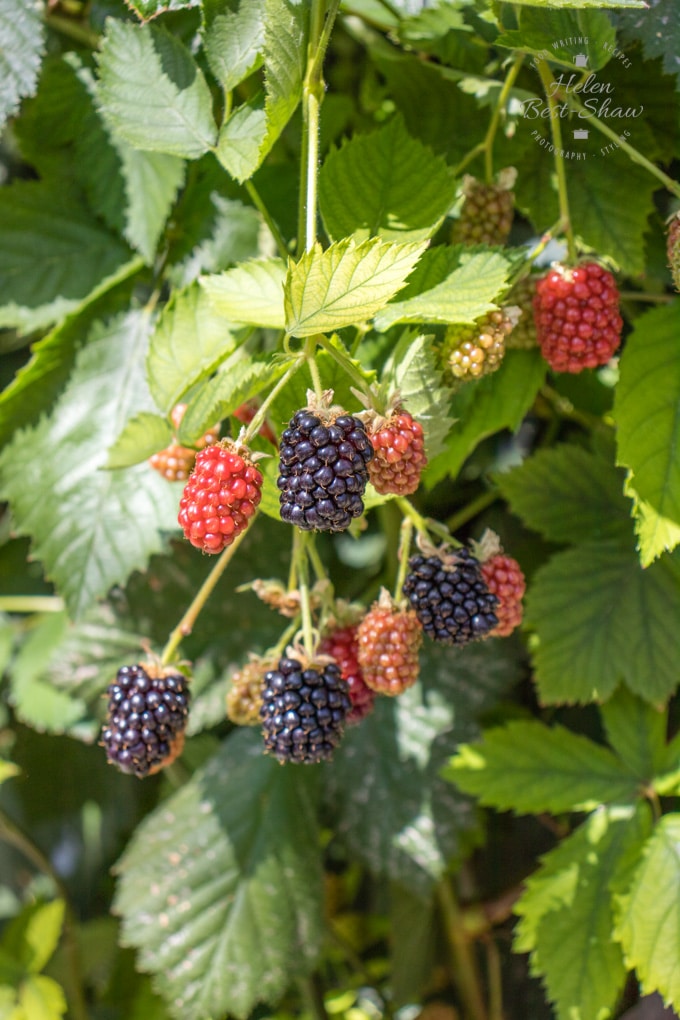 Driscolls farmers are committed to being as green as they can, they use biomass generators for heat, and natural pollination from bees.   The plants are fed and watered by high tech completer systems, using just enough for optimum growth. 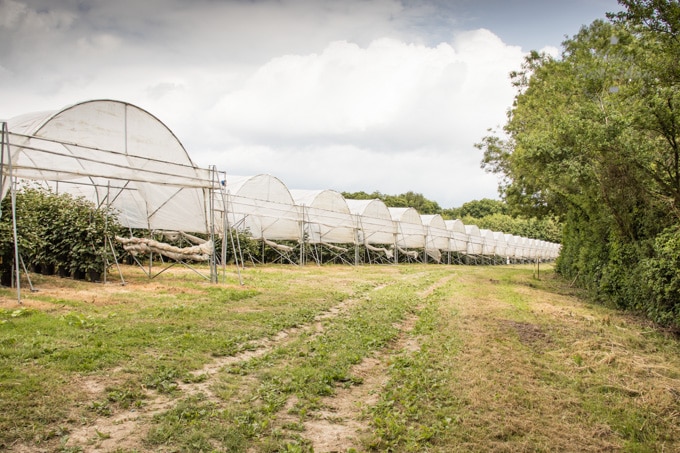 Later in the season production is moved to the fields where the blackberries are grown in pots, under cover.    Accommodation is provided in static mobile homes for the army of pickers. 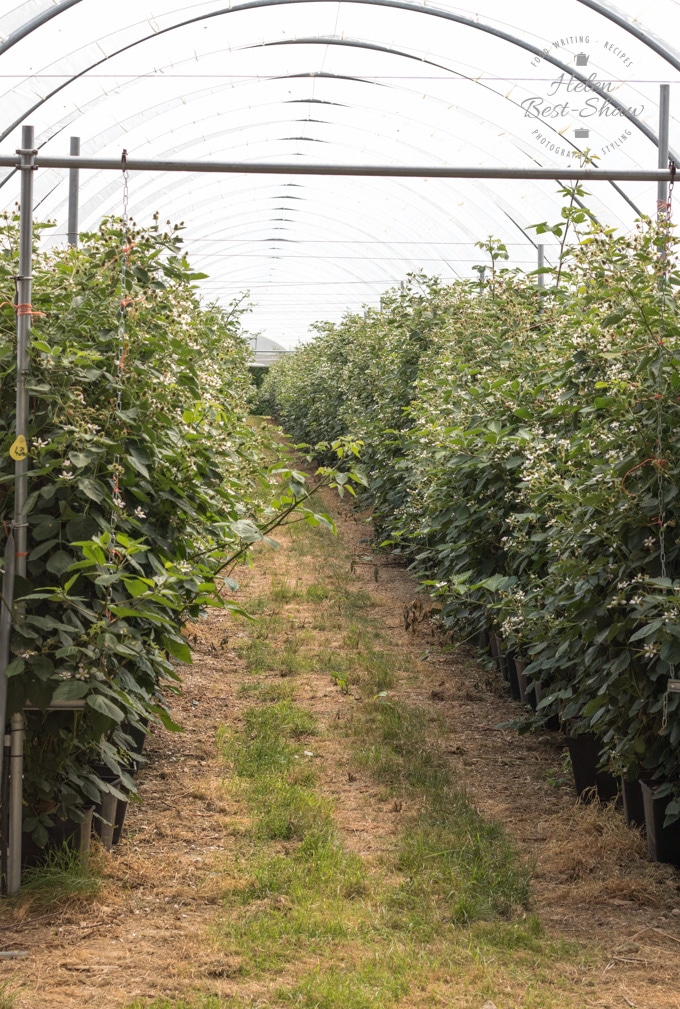 Recipe for Blackberry & Apple Green Smoothie commissioned by Driscoll’s® Victoria Sweet Blackberries. All opinions are our own. 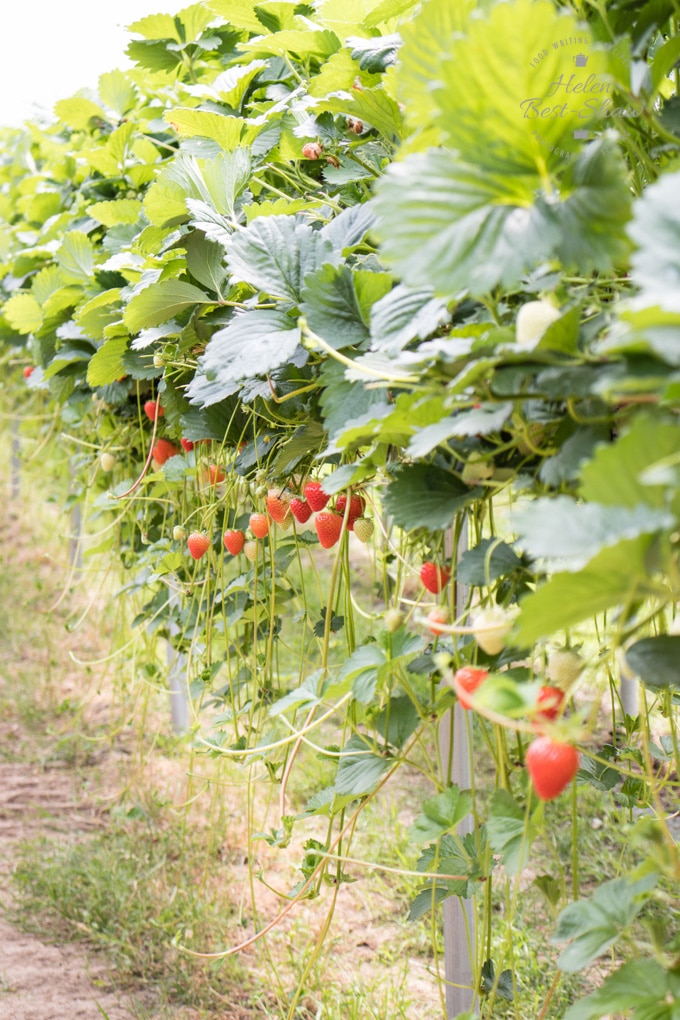 Driscolls strawberries growing on raised beds at Clockhouse Farm – far easier to harvest than the rows growing in the fields when I picked as a student.

For another use for blackberries, make my Mini Fruit Tart Canapés with Creme Patissiere