If you love sushi this simple-to-make Tahitian poisson cru, or Polynesian ceviche, will become a firm favourite.  Quick, easy and adaptable, as well as being packed with vegetables. Paleo and Whole 30 friendly. 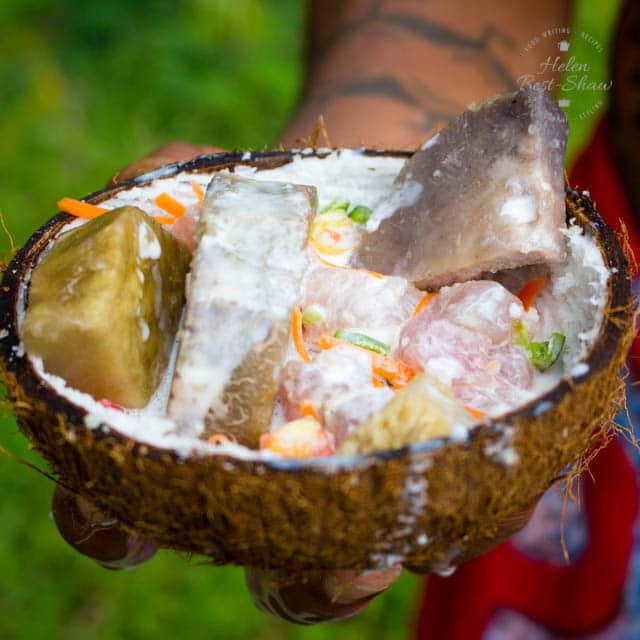 The foodie’s version of knowing someone by walking a mile in their shoes surely has to be sitting at their table and sharing their meal?  One of the huge pleasures and most important part of travel for me is to (within reason) eat everything I am offered and to get to know the people and their country by sharing their food.  All too often we go abroad, and stay in identikit resorts and hotels and eat the same as we would do at home.  It really is such a shame, different cultures and countries have so much to offer, but all too often people are too timid to branch out with what they put onto their plates. 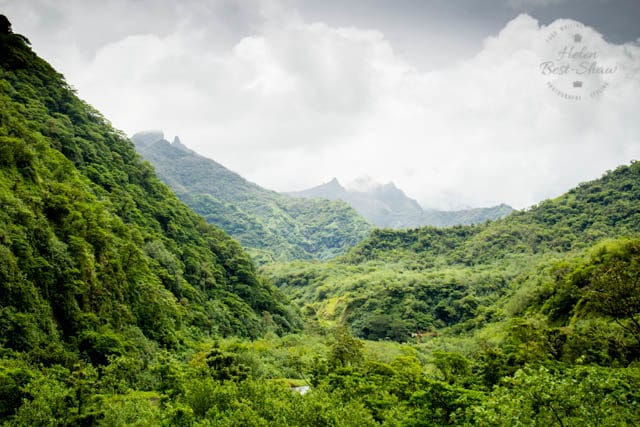 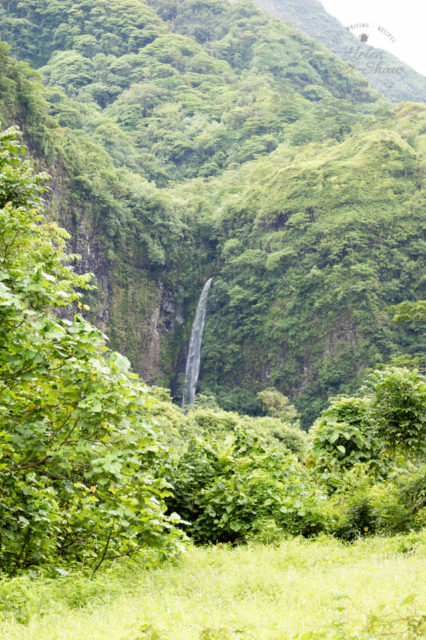 On my recent trip to Tahiti I learnt that there is so much more to the islands than azure tropical seas teaming with marine life, white sandy beaches with their pristine resorts and the iconic water bungalows.  In the interior of the island are dense lush tropical forests, alive with stories, ancient villages and sacred sites.   Think of a cross between Lost and Jurassic Park and you get an idea of the landscape and vegetation.

We took a trip in the Papenoo valley with Iaorana Tahiti Expeditions, owned by Teuai (Olivier) Lenoir, a real life superhero (he lifted a 115kg rock with ease, and literally ran up coconut tree) who has an infectious passion for Tahitian culture and the mana of the islands. Teuai is an accomplished athlete with his love of tuaro maohi or traditional Polynesian sports (including the rock lifting), a dancer, qualified mountain guide, he is also thoroughly personable and a delight to spend time with. 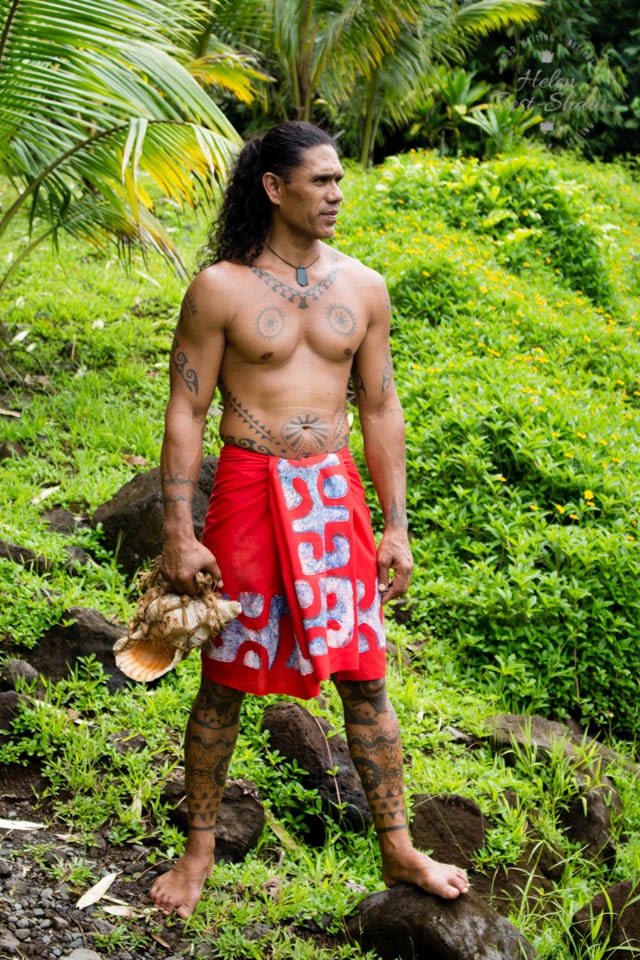 Having travelled by 4×4 into the mountains it was time to prepare lunch, a simple Tathian poisson cru – a Polynesian version of ceviche. The dish is endlessly adaptable, and so easy to make.  I dined at some excellent top restaurants on the trip, but it is probably this simple bowl that will remain with me, and be recreated at home to transport me back.   I ate bowls of this for breakfast each morning in the various hotels I stayed in, but of course the dish eaten outside was the best.

Firstly light a fire, and feed with coconut husks to help repel the mosquitos. 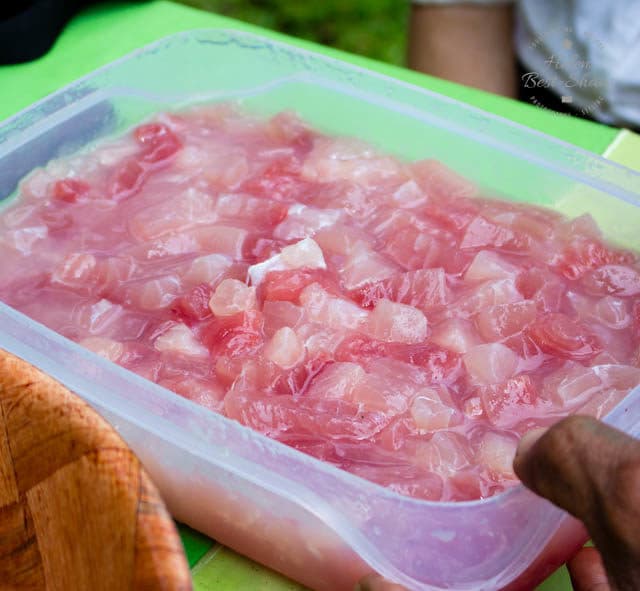 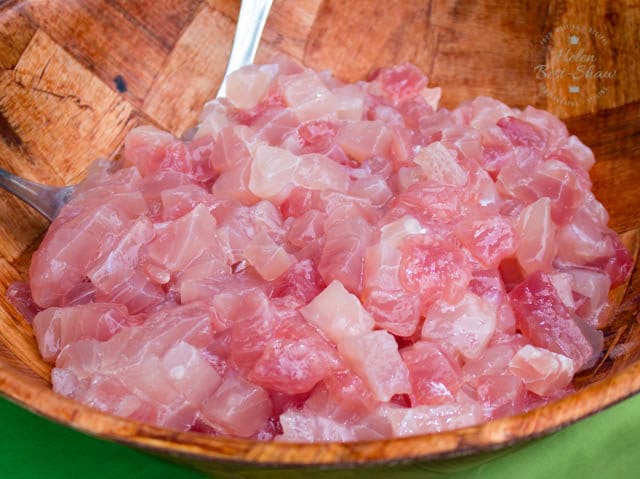 Take some fresh chopped tuna, which has been soaking in sea water, drain and place into a serving bowl. 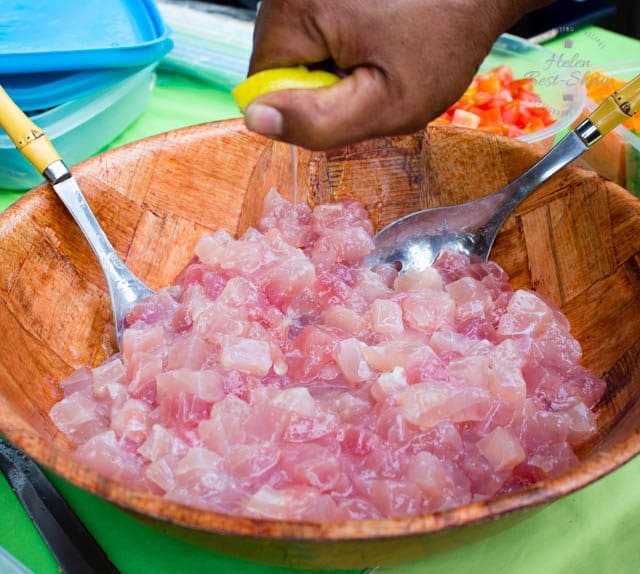 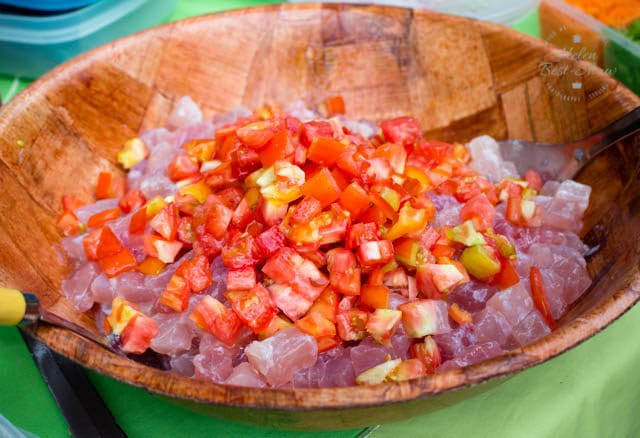 Squeeze lime juice over the fish and mix to coat it. Add a handful of diced diced tomatoes. 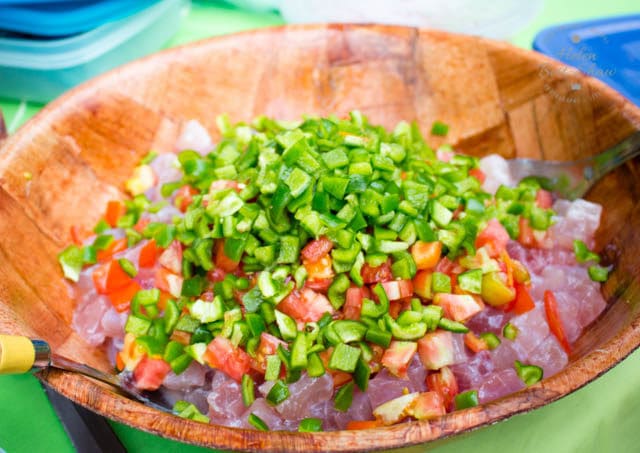 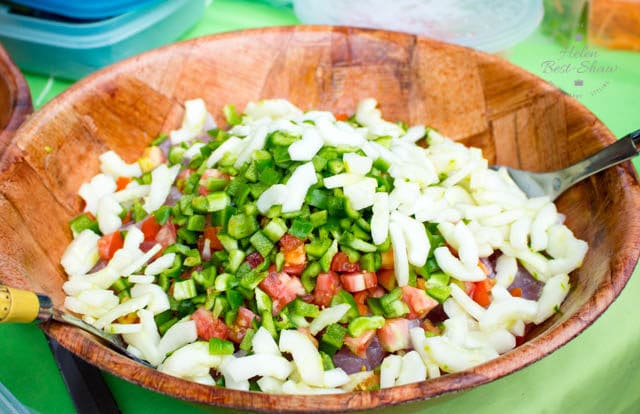 Add a handful of diced green pepper, and then some peeled and deseeded cucumber. 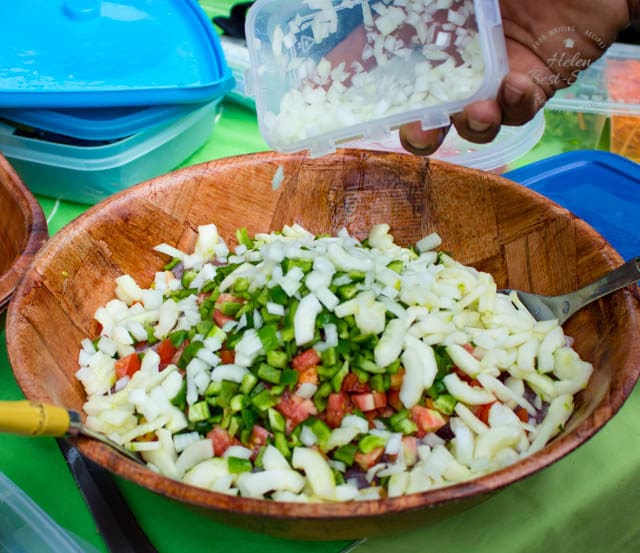 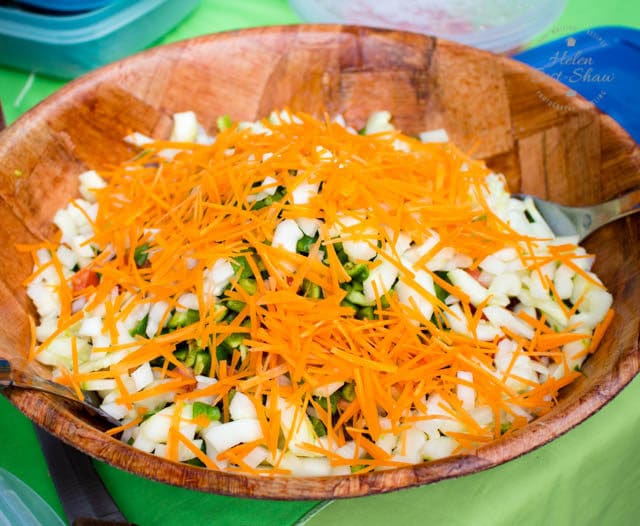 Add some diced onion, and a grated carrot. 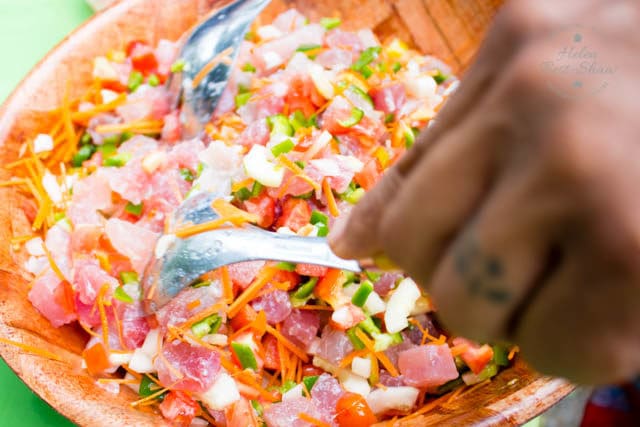 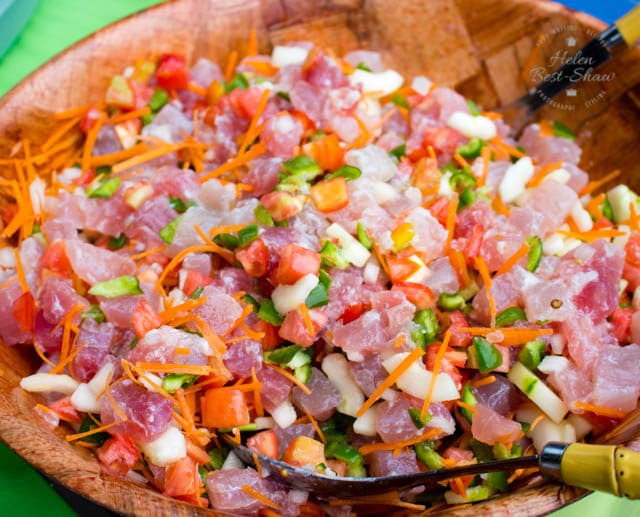 Now to prepare the coconuts. 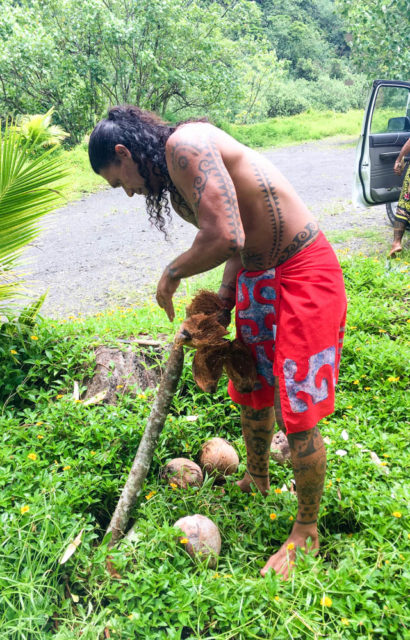 Take a long sturdy stick and use a machete to whittle a point at each end, drive the stick into the ground and use the sharp point to remove the husk from the coconuts.  Carefully crack the coconuts in half with the machete, drink the water, then grate the meat into a bowl. 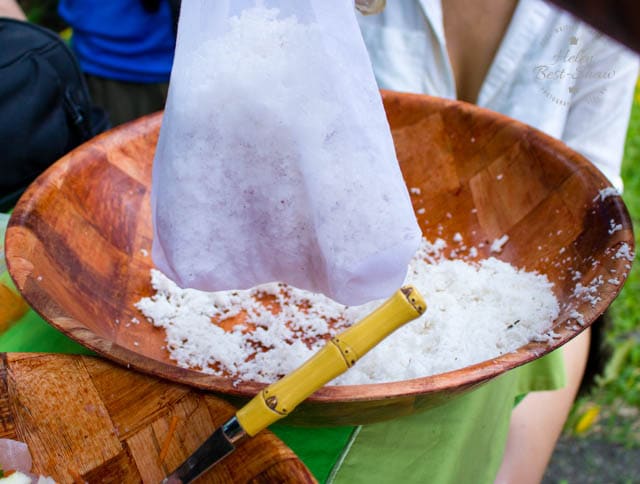 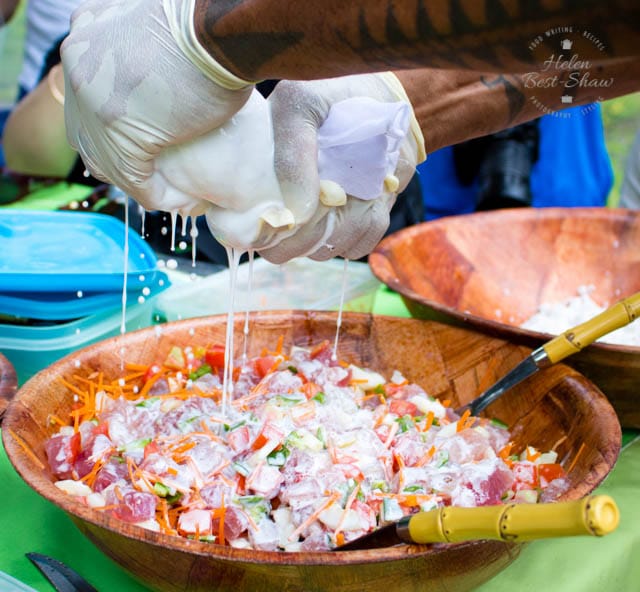 Place the grated coconut meat into a mesh bag and squeeze the coconut milk out of it over the fish mixture. 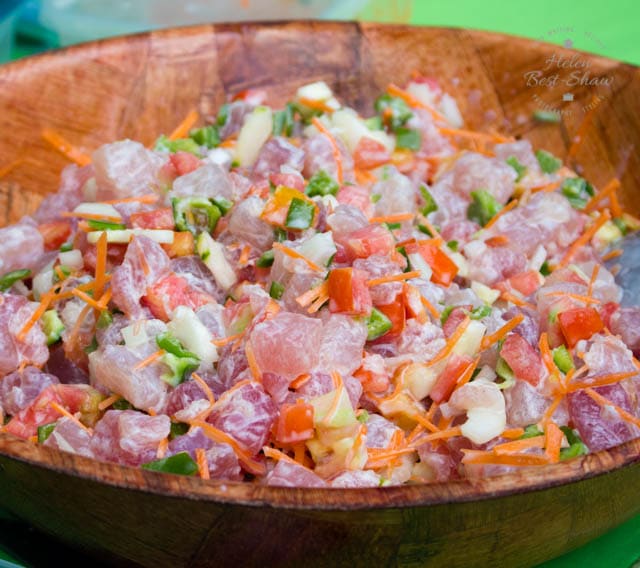 Mix and then serve in the coconut shell with some steamed taro.   Enjoy and let the mana embrace you.

If you try this Tahitian Poisson Cru (Polynesian Ceviche) {Paleo, Whole 30} please tag #FussFreeFlavours on Instagram or Twitter. It is amazing for me when for me when you make one of my recipes and I really do love to see them. You can also share it on my Facebook page. Please pin this recipe to Pinterest too! Thanks for reading Fuss Free Flavours!
4.91 from 30 votes 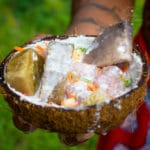 If you love sushi this simple-to-make Tahitian poisson cru, or ceviche, will become a firm favourite. Quick, easy and adaptable, as well as being packed with vegetables.

Having eaten it was back to the jeeps for a quick drive. 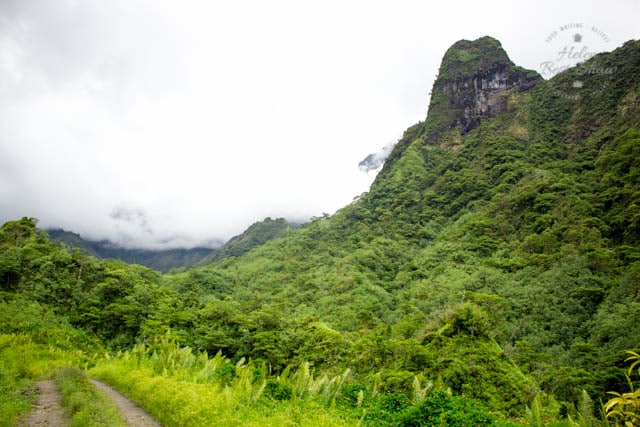 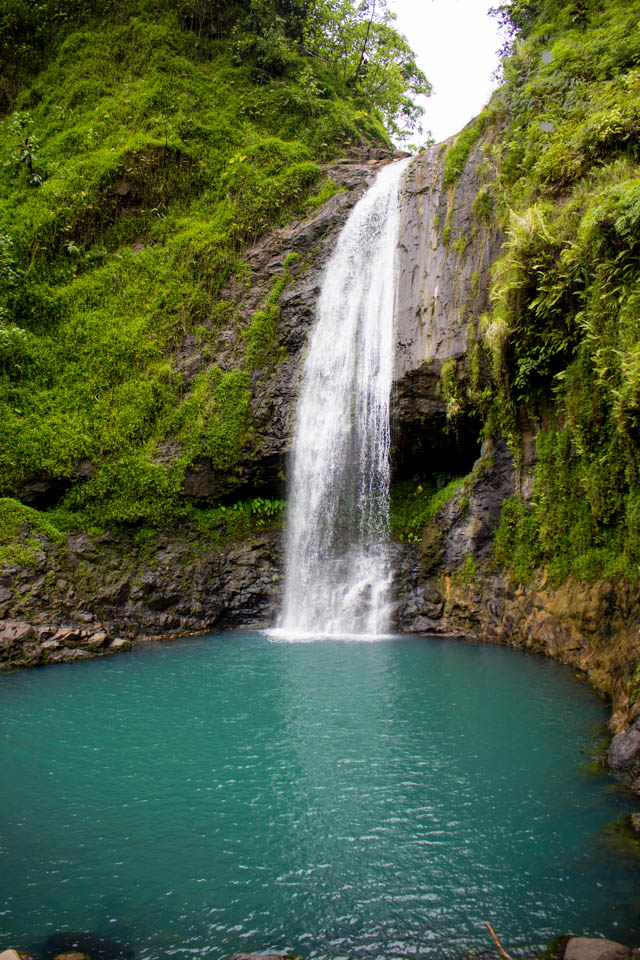 Where we left the road onto a hidden path, and hiked for 20 minutes, up and down steep slopes, across rushing rivers until we reached this blissful spot.

Tours with Teuai with Ioarana Tahiti Exhibitions are from $59USD per person – not including the lunch.    We were the guests of Tahiti Tourism and travelled via Paris with Air Tahiti Nui.   Follow the conversation on social #EmbracedbyMana.